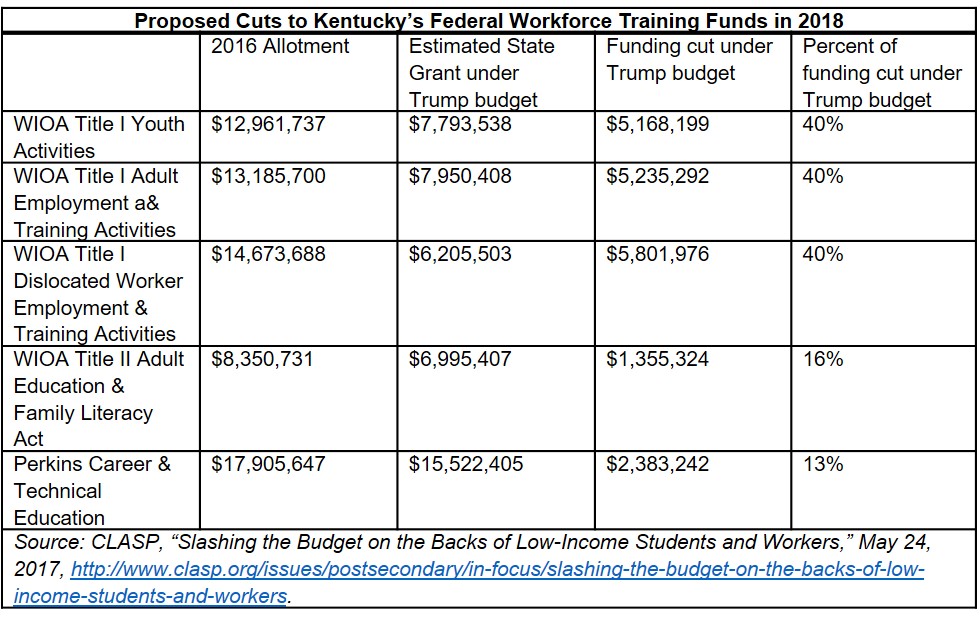 As noted in a recent report from the Center on Budget and Policy Priorities (CBPP), a plan that would actually lead to increased employment and earnings for jobless or under-employed workers with low skills would include: “new investments in high quality job training, including job training slots for those facing a cutoff of SNAP [food assistance] benefits because they are jobless; efforts to make college more affordable; subsidized jobs for those who need to build work experience and skills; and investments in child care so parents can work or participate in training or education programs.” Not only does the President’s budget proposal not do any of this, it actually cuts job training and programs that support child care; makes college more expensive for many; creates disincentives to work through cuts to Medicaid, SNAP (formerly known as “food stamps”) and housing assistance; and terminates food assistance to some who are jobless without offering them training or work opportunities.

Here are some of the ways Trump’s budget proposal makes it harder for Kentuckians to move up the economic ladder:

Workforce Innovation and Opportunity Act (WIOA) funds provide employment and training services for adults, dislocated workers and youth through formula grants to states. WIOA also funds adult education and literacy programs and vocational rehabilitation state grant programs that assist those with disabilities in obtaining employment. The budget proposal includes a $1.1 billion cut to WIOA funds — taking funding from $2.7 billion in 2017 to $1.6 billion in 2018. These cuts are expected to grow even deeper over time under the President’s budget.

The table below shows how much workforce development funding is at risk in Kentucky.

The budget proposal also cuts the Temporary Assistance for Needy Families (TANF) program by $22 billion over 10 years (13 percent). States use TANF funds for limited amounts of basic cash assistance as well as services — including employment services and job training — for poor families with children. In Kentucky, TANF funds make possible the state’s successful Ready to Work program that helps low-income adults attend community college while receiving the supports they need to succeed in school.

In addition, the President’s budget proposal would eliminate funding for the Community Service Employment for Older Americans program that helps older workers with low incomes make ends meet by working in local programs serving their communities. In 2015, Kentucky received more than $8 million in federal funding through this program; its elimination would mean that around 829 low-income Kentucky seniors lose this employment opportunity.

President Trump’s budget proposal eliminates the Federal Supplemental Educational Opportunity grant, which helps cover college costs for students with the greatest financial need. In Kentucky, this means an estimated 20,154 students would lose this financial aid opportunity at the same time that college is becoming even less affordable in our state.

The Federal Work-Study program is cut by 51 percent in the proposal; these funds are used to provide mostly on-campus jobs for qualifying students to help them better afford the high costs of college — and research has shown work-study students are more likely to graduate than those in non-work-study jobs and are more likely to be employed after graduating than students who do not work during school.  The proposed cut would mean an estimated 4,504 Kentucky students would lose their work-study slots.

In addition, student loans would be more expensive for many low- and moderate-income students as the President’s budget proposal eliminates subsidized loans, among other changes. It also doesn’t extend a provision (set to expire after the 2017-2018 school year) that adjusts the Pell Grant for inflation. Already Pell Grants cover only an average of less than 30 percent of the cost of attending a public four-year college.

Child care assistance is critical to helping parents work, attend job training or go to school when their incomes are too low to afford the high cost of care. Due to inadequate funding, just 1 in 6 children nationally who qualify for child care assistance receive it. Kentucky’s child care assistance program is already relatively weak compared to programs in other states in terms of eligibility limits, parent co-payments, reimbursement rates to providers and how much leeway parents have when looking for a job. Meanwhile, President Trump’s budget proposal sets funding for the Child Care and Development Block Grant just below the 2017 funding level and cuts two programs — TANF and the Social Services Block Grant (SSBG) — that many states use to fund child care; in 2015, 18 percent of Kentucky’s TANF funds were used for child care. SSBG is completely eliminated in the budget proposal.

Medicaid and SNAP currently have provisions so that when a poor adult is able to get a job or increase earnings modestly, the individual or family does not lose health care or food assistance entirely because of a “benefit cliff.” For instance, Kentucky’s Medicaid expansion has enabled low-income working Kentuckians access to health insurance coverage when they would not otherwise have qualified for the program; the recent health reform legislation that passed the U.S. House combined with the additional cuts to Medicaid in the Trump budget would effectively end the state’s Medicaid expansion and make other harmful changes to the program. By eliminating these options for states, the budget proposal would create new work disincentives in both programs. In addition, the budget proposal would increase rent for those receiving house assistance more quickly as earnings rise.

As we have described previously, the President’s budget proposal would make changes in SNAP that require time limits to be enforced even in high unemployment areas. In Kentucky, this could mean that only 15 counties qualify for a waiver of these requirements despite so many more counties continuing to struggle economically; as of April 2016, 112 Kentucky counties were able to waive the time limits. As noted in the CBPP report, “Claims that the administration will ‘do everything we can to help you find a job’ ring hollow as the budget would do nothing to provide job training or work opportunities to individuals facing this time limit; rather those who are out of work and unable to access job training would simply lose food assistance.”