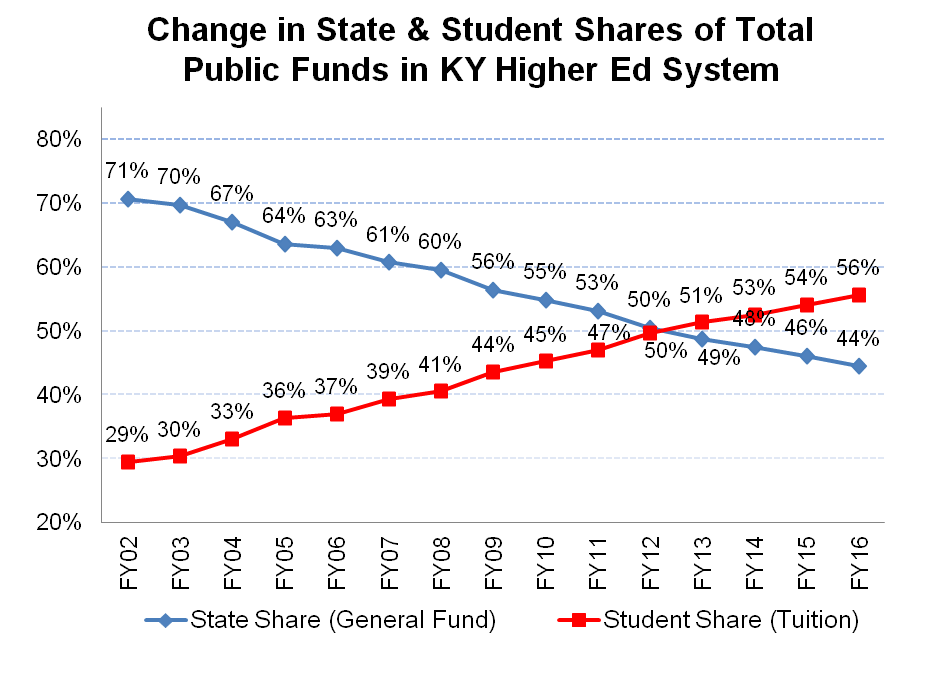 Today the Council on Postsecondary Education (CPE) announced the maximum in-state undergraduate tuition and mandatory fee increases the state’s public universities and community colleges will be allowed to charge students in the coming year. These tuition caps range from zero at the University of Louisville (at their request) to five percent at four of the state’s comprehensive institutions. In the coming months, the higher education institutions will decide how much to increase tuition and fees within these limits. While college affordability is widely understood to be a serious challenge in Kentucky, years of state budget cuts to higher education have resulted in continued tuition increases.

CPE is responsible for setting ceilings for how much tuition can increase at the state’s public universities and community colleges. Here are the caps approved at today’s CPE meeting:

The dollar amounts for these tuition ceilings can be found here.

In order to determine the appropriate tuition ceilings, CPE’s Tuition Development Work Group considered a number of factors — including out-of-pocket costs in each sector for students who receive grants or scholarships, expected upcoming increases in mandatory contributions to the state pension system (that apply to all but UL and UK, which do not participate in the Kentucky Employees Retirement System) other fixed cost increases and what the market may be able to bear in terms of tuition increases. The work group also took into consideration that NKU and WKU are slated to receive additional appropriations in 2018 to address disparities in the allocation of state funds among the comprehensive institutions. The work group’s recommendations were adopted at today’s CPE meeting.

Last year’s tuition and fee ceilings were 5 percent for UL and UK, a “common dollar increase” ceiling of $432 for the comprehensive universities (between a 4.65 percent and a 5.87 percent increase, depending on the institution) and a $9 per credit hour ceiling for KCTCS (about a 6.1 percent increase).

Now that these caps have been set, the postsecondary institutions will decide exactly how much they plan to increase tuition within these limits; these decisions typically end up pretty close to the ceilings.

Why Tuition Keeps Going Up

The tuition increases currently under consideration are largely the result of state budget cuts to higher education over the years. As seen in the graph below, the state share of total public funds in the state’s public postsecondary institutions decreased from 71 percent in 2002 to just 44 percent in 2016. According to the Center on Budget and Policy Priorities, Kentucky ranks sixth worst in the nation in (inflation-adjusted) per-student funding cuts since 2008. In total, the state’s public universities and community colleges have had their budget cut by 30 percent, in inflation-adjusted terms since 2008; that’s a $374 million difference.

In order to make up for some of the losses in state funding for higher education, tuition and fees have increased between 42.6 percent (KCTCS) and 64.0 percent (UL) since 2008. Meanwhile, even after raising tuition the state’s public postsecondary institutions are unable to cover all of their costs. This is in part due to the growth in fixed costs at the institutions, like health insurance and utilities, on top of state General Fund cuts. As seen in the graph below from CPE, the cumulative increase in revenue collected from tuition and fees does not cover the cumulative growth in costs plus the cuts in General Fund dollars to the institutions. 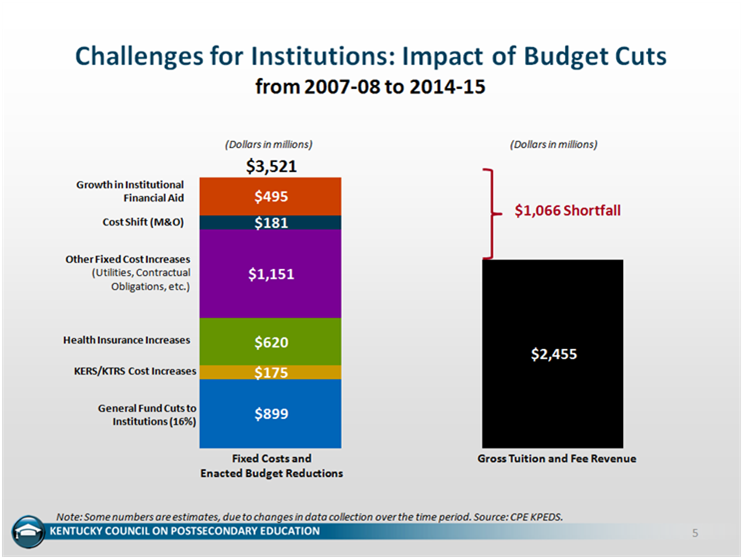 Even with tuition increases, the universities and community colleges reported in September 2016 they had cut a total of 980 positions and 56 programs in response to recent state budget cuts.

Despite the thoughtfulness of the Tuition Development Work Group and the tough spot the state’s public universities and community colleges are in, these tuition increases will make college out of reach for even more Kentuckians. Low-income and minority students are already less likely to enroll and graduate, face more financial difficulties even when they attend community college and receive Pell grants and more frequently take out additional loans to pay for college. The state’s new Work Ready scholarship will help a relatively small number of community college students, by covering tuition and fees for those earning degrees in certain fields, but our state needs greater investment in all aspects of higher education in order to reach its goals — including funding for public universities and community colleges as well as state need-based financial aid.