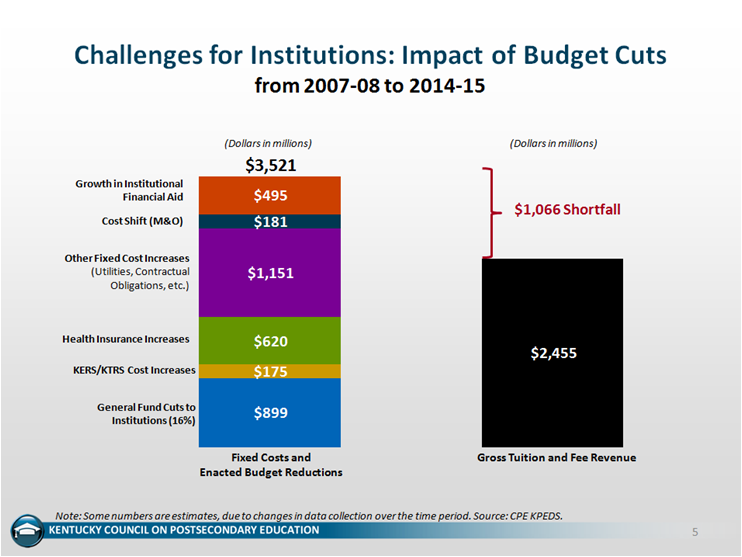 With the steep increases in tuition at Kentucky’s public universities and community colleges in recent years, a state mandated tuition freeze as proposed in SB 75 might sound like a good idea. But even with past tuition increases, the state’s higher education institutions are facing significant funding shortfalls once the growth in fixed costs like health insurance and utilities, on top of General Fund cuts, are taken into consideration.

Even while additional state cuts to higher education are being proposed, proponents of a tuition freeze assert that Kentucky’s public universities and community colleges are well funded as a result of prior tuition hikes. However, according to a recent presentation by Kentucky’s Council on Postsecondary Education (CPE) to a House budget review subcommittee, the cumulative increase in revenue collected from tuition and fees does not cover the cumulative growth in costs plus the cuts in General Fund dollars to the institutions. The graph below, presented by CPE, illustrates this:

As shown in the graph, between 2008 and 2015, the cumulative increase in tuition and fee revenue at the state’s public universities and community colleges was $2.5 billion. When cumulative General Fund cuts to these institutions ($899 million) and fixed cost increases ($1.9 billion) are taken into account — for instance, for health insurance ($620 million) pension contributions ($175 million) and other fixed costs ($1.15 billion) including utilities, contractual obligations, equipment, licenses and permits, workers’ compensation and unemployment compensation — there is still a funding shortfall. It worsens the problem that the state also stopped covering maintenance and operation costs for new facilities — for instance, janitorial staff, security and routine repairs — so these services now have to be covered by the institutions. CPE also reported another cost increase is growth in institutional financial aid for students.

As we have heard from the state’s university and community college presidents in the past, budget cuts not only lead to additional tuition increases but also other cost-saving actions that can compromise the quality of education provided to students — for instance, cutting back on staff and over-relying on part-time faculty. It can also affect the mission of the universities — such as more focus on recruiting out-of-state students who pay higher tuition (the share of UK undergraduates who are out of state rose from 18 percent in 2005 to 29 percent in 2014).

It’s wrong to suggest that the big disinvestment our state has made in higher education — if the governor’s cuts go into effect, a total of 35 percent decline in funding since 2008 once inflation is taken into account — won’t result in big tuition increases and that simply halting those increases somehow solves the problem.