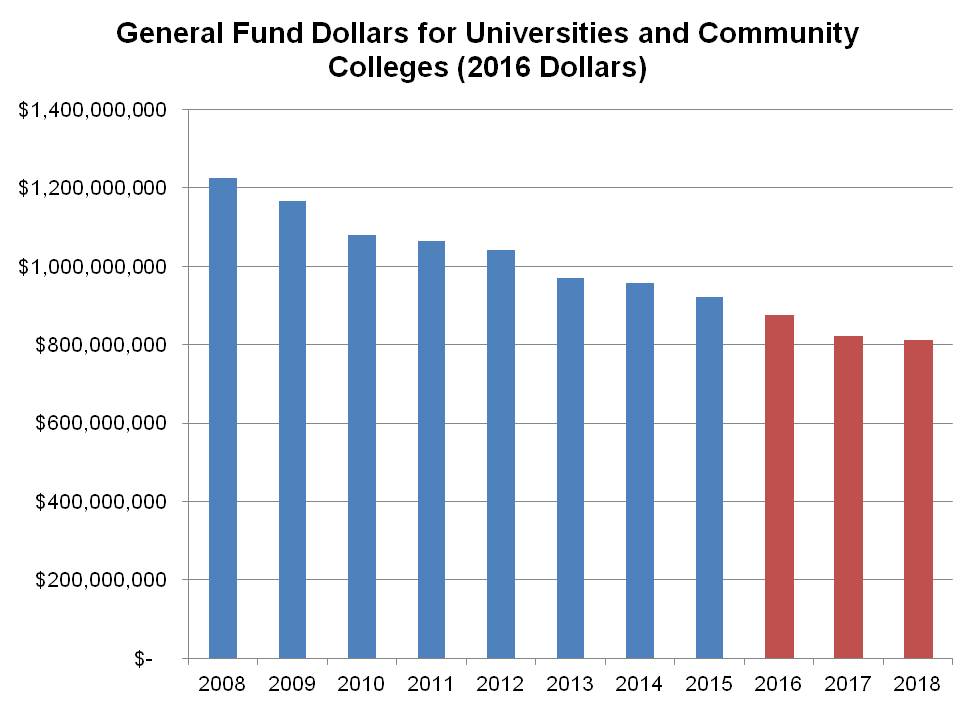 Governor Bevin’s budget proposal includes major cuts to higher education institutions and across other areas of state government where funding has been reduced deeply by what will amount to a decade of cuts. It repurposes those resources primarily to increase funding for the state’s pension plans and put money aside in the rainy day fund.

How the Budget is Constructed

The General Fund budget relies on modest expected revenue growth over the biennium of 3.2 percent in 2017 and 2.4 percent in 2018. It utilizes a beginning balance of $221 million in fiscal year 2016 as well as revenues for 2016 that are currently expected to be $243 million above what was originally forecasted. That money is spent over the biennium, leaving no balance at the end of 2018 (though money is deposited in the rainy day fund, as described below).

Unlike previous budgets, the governor’s plan spends comparatively little in the way of fund transfers from dedicated pots of money in state government to the General Fund — only $120 million. The previous two-year budget included $369 million in fund transfers including money from the Public Employees’ Health Trust Fund and firefighter and law enforcement training funds. The average amount of fund transfers over the last eight biennia is $340 million.

Pensions receive significant new funding under the governor’s plan. The plan includes $130 million more to the Kentucky Employees Retirement System (KERS) over the biennium, or the full actuarially required contribution using the new, lower investment return assumption of 6.75 percent adopted by the KERS board. On top of that, the plan puts an additional $89.4 million into KERS over the two year-period.  The proposal also includes $591 million in new funding for the Kentucky Teachers’ Retirement System (KTRS) over the biennium, or approximately 56 percent of the new funding requested. And the plan includes what are called “contingent appropriations for pensions” of $136 million over the biennium, which are available for the state employee and teacher retirement systems if revenues come in as expected and spending is held at the levels appropriated (split evenly between the two plans).

The proposal also grows the Budget Reserve Trust Fund, known as the rainy day fund. It adds $179 million over the biennium to the fund, plus an additional $136 million in contingent appropriations (this is in addition to the $136 million in contingent appropriations mentioned above for pensions). In total, this would increase the balance of the rainy day fund from $209 million in 2016 to $524 million at the end of 2018.

Other areas with increased dollars in the budget include higher salaries for social workers and state police, a reduction in caseloads for guardians, more public defenders and money for cleaning up backlogs of untested rape kits.

The budget increases funding for college scholarship programs, but that increase largely doesn’t go to need-based scholarships like the College Access Program (CAP) as required by statute — from which lottery monies have been diverted in recent years 1. Instead, $27 million in 2017 and $32 million in 2018 are allocated to new “student financial aid for participation in workforce development and training programs.”

The governor’s budget includes 4.5 percent cuts in the current fiscal year to state agencies and then a 9 percent cut for the two-year biennium.

Among the biggest cuts in absolute dollars are to universities and community colleges, which would receive $63 million less in 2018 than they did in 2015 and $231 million less than they received in 2008. As seen in the graph below, funding for universities and community colleges would be 35 percent less in 2018 than it was in 2008 once inflation is taken into account. Kentucky already ranks 11th-worst among the states in per student cuts to higher education since 2008 2.

The plan also eliminates Kynect, the state’s health insurance exchange, and uses a portion of the dedicated fee that had been funding Kynect to help pay for its shutdown, according to the governor’s address. It cuts General Fund dollars to behavioral health, developmental and intellectual disabilities by $14.5 million or 7.4 percent between the 2016 enacted budget and 2018. No raises for either teachers or state employees are included in the plan beyond the selected salary adjustments mentioned previously.

SEEK, the core formula that funds local schools, is the largest General Fund expenditure in the budget. Funding for SEEK in the governor’s plan is almost flat for the biennium — total SEEK funding goes up 0.8 percent in 2017 and declines 0.4 percent in 2018. The monies freeze the guaranteed per pupil SEEK level at $3,981 from 2016 through 2018. That would make this funding 12 percent below 2008 dollars once inflation is taken into account (see graph below). In a recent report, Kentucky ranked sixth-worst among states in cuts to its core formula funding with a 10.6 percent cut since 2008 3. 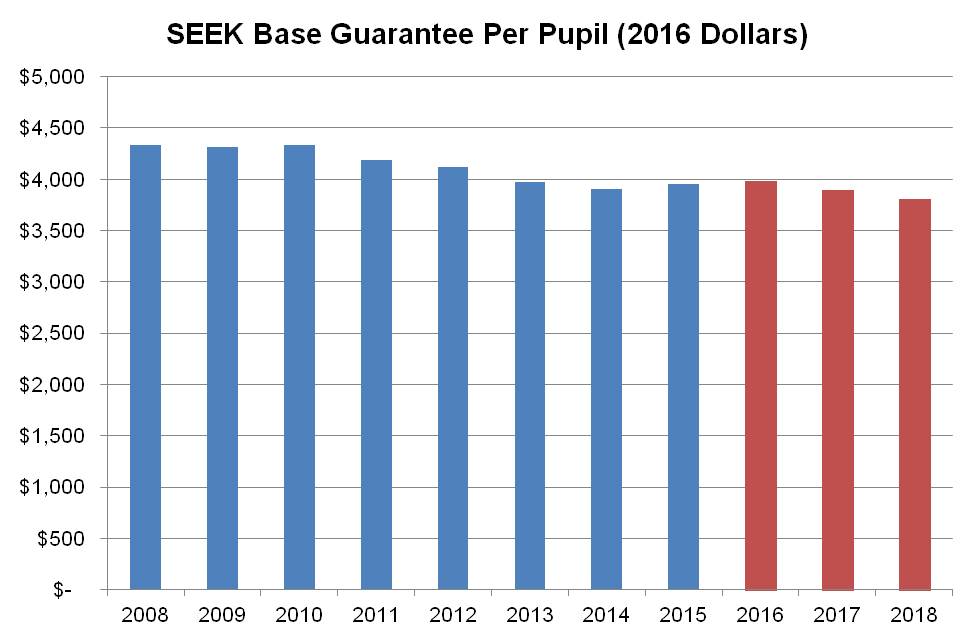 The Learning and Results Services part of the education budget that includes pre-school, afterschool programs, textbooks, family resource centers and other services is cut substantially. This area (minus health insurance) is funded at a level 9.2 percent less in 2018 than it was in 2016’s original budget, and 13.2 percent less once inflation is taken into account. That’s a cut of $32 million.

The cuts in total General Fund dollars to a selection of other programs and agencies are included in the graph below (note these cuts differ somewhat from the across-the board percentages because added pension dollars are spread across agencies’ budgets). In some areas of government, cumulative budget cuts amount to over 30 percent since 2008 once inflation is taken into account. 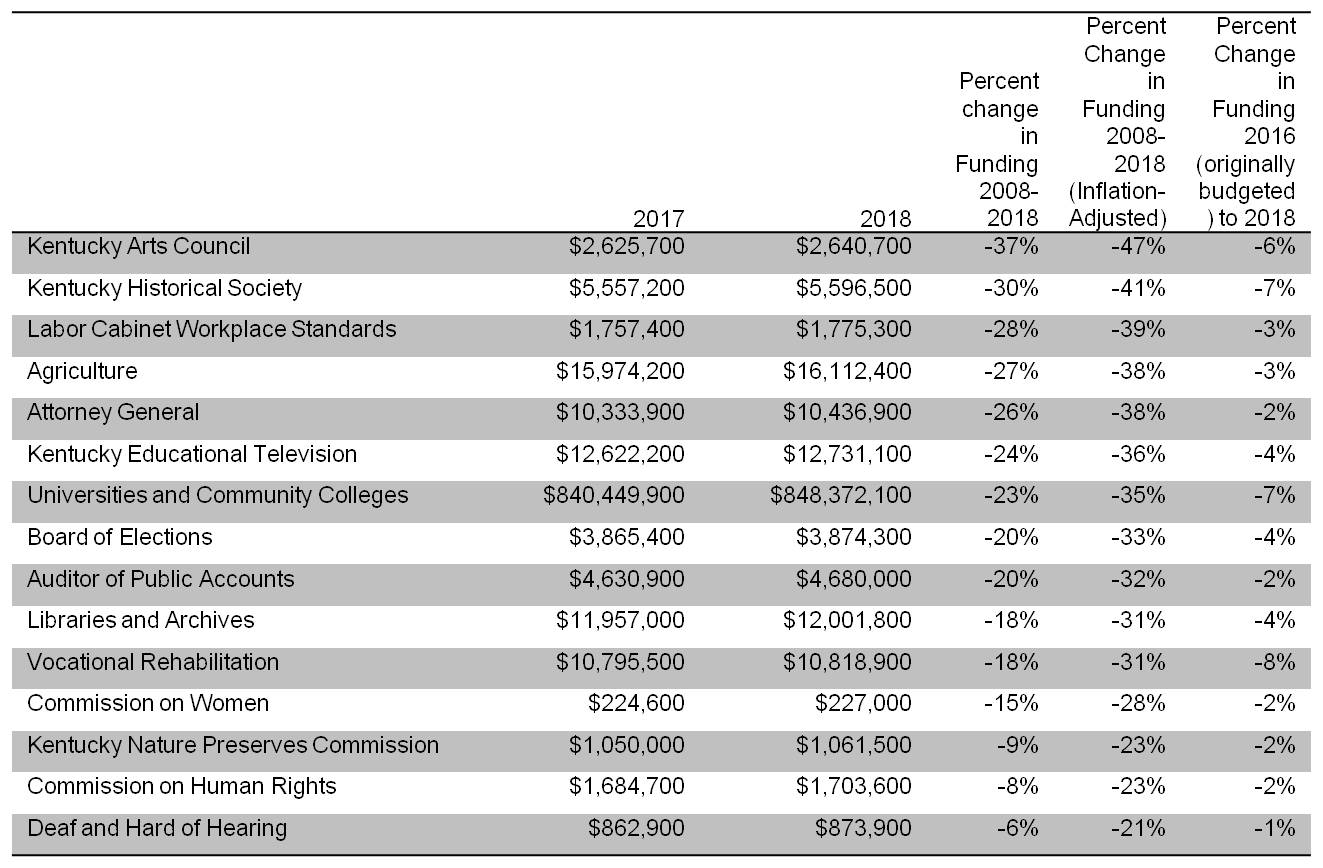