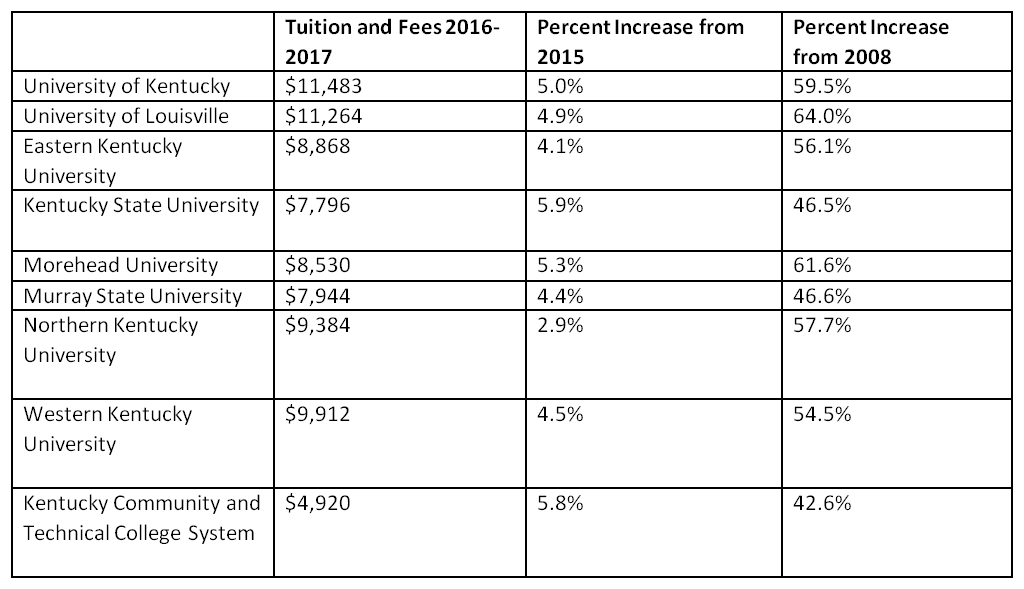 Kentucky college students face barriers and challenges as they begin a new academic year, some of which are worsening as a result of yet another round of state budget cuts to higher educational institutions.

Tuition at public universities and community colleges has been on the rise in Kentucky for years, largely as a result of state budget cuts. As we’ve described elsewhere, while Kentucky continues to cut funding for higher education most states are increasing funding. The most recent cuts have led to more tuition increases in 2015-2016.

Sources: University and community college websites for most recent tuition and fees and Kentucky Council on Postsecondary Education for historical data.

It is important to keep in mind that tuition and fees make up only a portion of the actual costs of attending college (i.e., room and board, books, etc.). National research shows  many community college students struggle with food and/or housing insecurity.

Kentucky students are going further in debt. The average amount of student debt for Kentucky graduates is $25,939, an increase of 48 percent since 2008 when inflation is taken into account. Tuition increases may lead to more borrowing.

While the 2016-2018 budget did include more money for the state’s need-based scholarships — a $14.7 million increase, or nearly 8,000 more scholarships, over the two-year period — the need is much greater than the additional funds. In 2015, 62,200 students who qualified for the need-based scholarships were not awarded them, assuming all would have ended up attending. The two-year budget also included the new Work Ready Scholarship, but it will not be available to students until next year as a result of the governor’s veto, and details of the program still need to be worked out. The scholarship was originally designed to pay, starting in fiscal year 2017, for any tuition and fees not covered by grants or scholarships for Kentuckians attending a state community college right after high school.

Educational Quality and/or Student Supports May Be Jeopardized

As has been well documented by the Lexington Herald-Leader, budget cuts have caused other critical changes at Kentucky’s higher education institutions — including faculty and staff layoffs, hiring freezes, some degree and program eliminations, and student service units reducing hours. In response to previous rounds of budget cuts, the state’s universities and community colleges had already cut back on staff and were relying more heavily on part-time faculty, not to mention deferring maintenance issues that were very serious in some cases.

Even Greater Impact Felt by Low-income and Minority Kentuckians

Low-income and minority students are already less likely to enroll and graduate, face more financial difficulties even when they attend community college and receive Pell grants and more frequently take out additional loans to pay for college. Pell may cover tuition and fees at a community college but not the full cost of attendance, and students who receive Pell are more than twice as likely to borrow and have higher amounts of student loan debt. The additional budget cuts, which make college less affordable and may reduce the supports that can be critical to helping low-income and minority students graduate with a degree or credential, will likely worsen the situation.