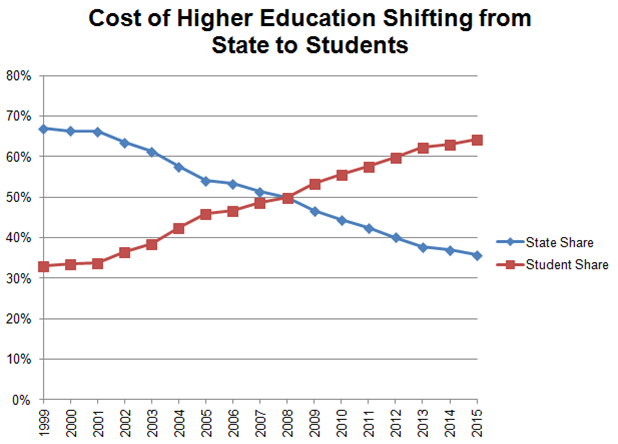 In recent years, Kentucky has had among the largest state budget cuts to higher education in the nation and steepest tuition increases. By ending cuts to state universities and community colleges, making a big increase in funding for need-based financial need and creating a scholarship to end tuition for traditional-age community college students, the House budget would go a long way toward making a college education attainable for more Kentuckians.

No Cuts to State Universities and Community Colleges

The House budget does not include any cuts to the state’s public universities and community colleges, reversing many of the deep cuts to higher education in the governor’s budget proposal. One of the main drivers for tuition hikes at public postsecondary institutions in recent years has been declining state funding. As shown in the graph below, the state’s share of funding for postsecondary education compared to the students’ share declined from 67 percent in 1999 to only 36 percent in 2015.

Although the House budget does not include increases in funding for these schools to address past cuts and fixed cost increases, the flat-lined funding ends the trend of cuts in recent years and is expected to prevent large tuition increases. Kentucky Community and Technical College System’s president had testified to a budget review subcommittee that the tuition increase needed to compensate for the cuts proposed in the governor’s budget was 8.8 percent. Tuition at KCTCS has already gone up 203 percent since 1999.

The House budget also includes a substantial increase in the state’s investment in need-based financial aid. In recent years, lottery funds that are by law intended for the state’s need-based financial aid programs — the College Access Program (CAP) and the Kentucky Tuition Grant (KTG) — have instead been used for other areas of the budget. Meanwhile, tens of thousands of qualified students each year have been denied these scholarships due to lack of funds. The governor’s proposed budget continued this diversion of funds.

The increased money for CAP and KTG — $26.4 million more in 2017 and $30.6 million more in 2018 than in the governor’s budget — would enable more than 30,000 additional low-income students to receive need-based scholarships over the biennium. This increased investment in helping those with the greatest need attend college is important as research shows that need-based financial aid is effective at increasing college enrollment among low- and moderate-income students as well as increasing the number of credits earned and degree completion. That’s the group of students where Kentucky has fallen short in its accountability measures.

The House budget also funds an initiative to provide free community college tuition and fees to Kentuckians right out of college or who earn a GED credential before the age of 19. An estimated 37 percent of Kentuckians newly graduating from high school would benefit from this program, titled Work Ready Kentucky. As a “last dollar program,” the scholarship pays for the gap between what a student has received in grants and scholarships and the cost of tuition and mandatory fees. Adult and part-time students do not qualify for this program. The budgeted cost is $13 million in 2017 and $20 million in 2018.

Taken together, these three aspects of the budget would go a long way toward improving college affordability in Kentucky, and should be included in the final budget.