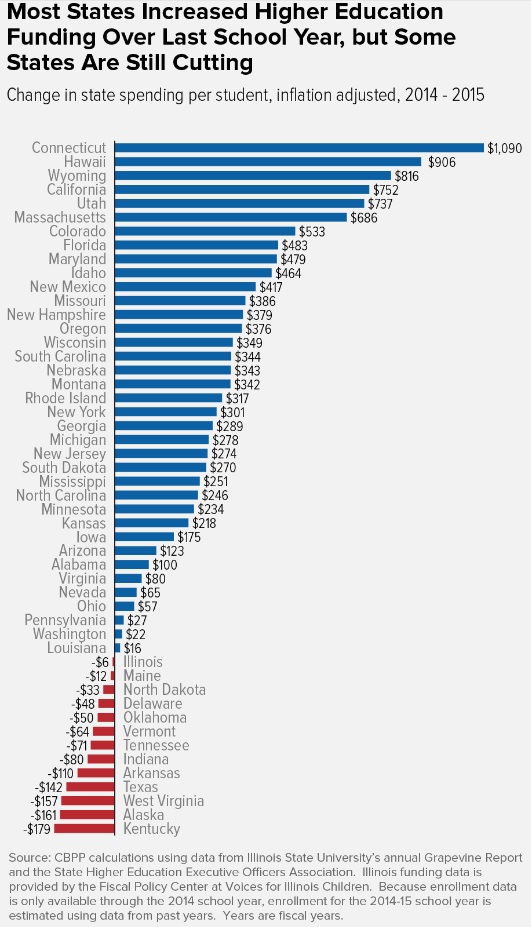 A new report on state trends in funding for higher education places Kentucky at or near the bottom in several categories for its continued cuts to public college and university funding. That disinvestment threatens to limit access to higher education and opportunities for economic growth.

Even as most states have begun to restore funding for higher education after cuts during the recession, Kentucky has continued to reduce funding as outlined in the report from the Center on Budget and Policy Priorities. Continued cuts will make it harder for the state to grow and attract businesses that rely on a well-educated workforce.

“Smart investments in public colleges and universities will help strengthen our economy,” said Kenny Colston, communications director for the Kentucky Center for Economic Policy. “Sadly, our elected leaders are still failing to make those smart investments, threatening the state’s well-being, overburdening students and holding everyone back. It’s time Kentucky paid for education again, like a state slogan used to say.”

A look at how Kentucky fares in the report in terms of recent funding decisions paints a bleak picture for higher education in the Commonwealth:

Kentucky also ranks poorly when it comes to state funding for higher education since the recession began in 2008. Lawmakers are funding Kentucky’s public universities and colleges nearly 28 percent less now than pre-recession, 11th-worst among the states. That equates to roughly $3,000 less per-student in state funding or 9th-worst in the country in the dollar amount cut. At the same time, tuition has increased 28.1 percent.

Meanwhile, finances play a big role in whether or not students — particularly those from low-income families — enroll in and graduate from college. And even the state’s most affordable option, the Kentucky Community and Technical College System, is not affordable for many; it had the highest median annual tuition and fees for community colleges in Southern Regional Board states in 2011-2012 and the 11th most expensive community college tuition and fees in the nation in the 2012-2013 school year.

To reverse these disturbing trends, Kentucky needs to make higher education a greater priority. In order to make sure the Commonwealth has enough money to fund higher education adequately, lawmakers need to commit to revenue-raising tax policies rather than tax breaks like the state’s recent expansion of its film tax credits, which will cost the state millions of dollars each year.

“A thriving economy of the future requires college-educated workers,” said Michael Mitchell, policy analyst at the Center on Budget and Policy Priorities and author of the report. “For the sake of its future prosperity, Kentucky should start reinvesting in its colleges and universities now.”