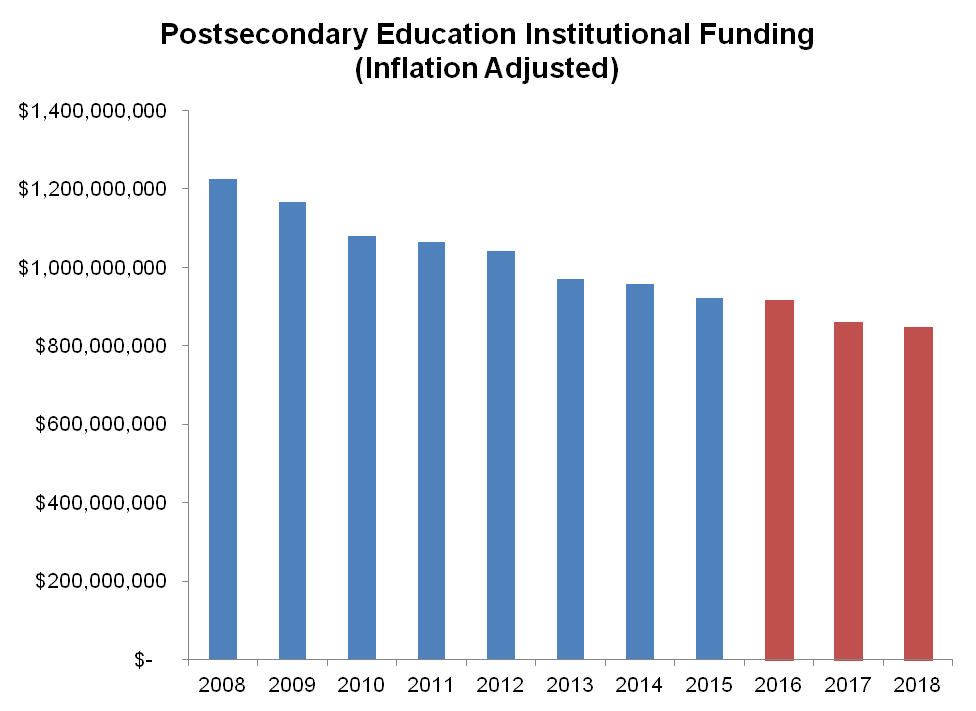 To view this report as a PDF, click here.

The budget passed by the General Assembly maintains the governor’s proposed cuts of 9 percent to many parts of government over the biennium and contains a 4.5 percent cut to higher education and flat-funding for K-12 schools. It uses savings from these cuts along with one-time monies to contribute $1.16 billion above base funding over the two years directly to the state’s underfunded pension systems and put $125 million in a “permanent” pension fund.

The state’s spending plan will be finalized once the governor decides what he will veto and pending the outcome of a court case challenging the governor’s decision to make 4.5 percent cuts to public universities and community colleges in the current fiscal year. Those decisions will also affect how much ends up in the rainy day fund and other areas.

Contains 4.5 percent Cuts to Higher Education and Cuts to Other Areas

A major point of contention between the two chambers’ budgets concerned higher education, which the Senate budget cut by 9 percent and the House budget did not cut. In the final agreement, higher education is cut by 4.5 percent. The budget also begins allocating a portion of the funding for higher education institutions to a performance-based formula, beginning with 5 percent of their appropriations in 2018. A working group is charged with developing the formula by December of this year.

As the graph below shows, with this cut higher education funding will be reduced by 31 percent between 2008 and 2018 once inflation is taken into account, with 5 percent of these funds at risk because of performance-based funding. Already, Kentucky ranked 11th-worst among the states for its cuts to higher education since 2008 1.

Source: KCEP analysis of Office of the State Budget Director, Bureau of Labor Statistics data. Does not include the governor’s 4.5 percent cut for 2016.

The budget agreement does contain significant new investments in college affordability programs. It includes $55 million more for the need-based lottery funded scholarship programs — the College Access Program and the Kentucky Tuition Grant program — over the biennium than was included in the last two year budget. That puts funding for those programs up to the amount intended by law (dollars have been diverted from these programs in recent budgets) 2. This increase would help an estimated 30,000 students. The final budget also includes $25.3 million over the biennium for the Work Ready Kentucky Scholarship program, a new initiative that provides free tuition to traditional age students enrolled in associate’s degree programs at the state’s community colleges, public universities and private colleges. And the budget includes $15 million over the biennium for dual credit merit-based scholarships for high school students enrolled in college classes, a priority of the Senate.

The budget does not include cuts to the non-SEEK portions of P-12 education, which the governor’s budget and the Senate budget each cut by nine percent. That means funding for Learning and Results Services (LARS) areas like preschool, extended school services, teacher professional development and instructional resources are frozen at their 2016 funding levels for 2017 and 2018. The plan does expand eligibility for preschool from 160 percent to 200 percent of the federal poverty level. It also includes an additional $10.6 million each year to expand eligibility for child care assistance from 150 percent to 160 percent of the poverty level.

The budget would essentially freeze funding for SEEK, the core funding formula for schools and the largest General Fund expenditure. That would make SEEK funding 12.2 percent below its 2008 level once inflation is taken into account. In a recent report, Kentucky ranked 6th-worst among states in cuts to its core funding formula with a 10.6 percent cut since 2008 3.

The budget cuts the constitutional offices (Attorney General, Secretary of State, Auditor, Treasurer, Agriculture) by 3.375 percent. Kentucky Educational Television was not cut. The final judicial branch budget removes cuts that had been included in earlier versions of the budget and helps address the structural imbalance in the branch’s budget through supplemental dollars contained in a separate bill.

Like previous versions of the budget, the plan includes approximately nine percent cuts to other areas including behavioral health, community based services (besides child care and non-parental relative placement), Aging and Independent Living, Kentucky Arts Council, Educational Professional Standards Board, Energy Development and Independence and the Kentucky Nature Preserves Commission.

Both the House and the governor had included funding for 44 new public defender positions to help with caseloads, but that money is not included in the final plan. The budget sends 60 percent of coal severance tax money back to coal counties through a variety of programs and local revenue sharing, up from the approximately 50 percent that is sent back currently. As in previous versions of the budget, there are again no raises for employees in the budget other than selected salary increases for a few occupations such as social workers and state police.

The final budget makes much larger pension contributions than have been made in previous sessions, and more than what the governor had original proposed. The plan contributes an additional $1.16 billion over the biennium, compared to $845.5 million in the governor’s original proposal.

One difference between previous versions of the budget was the mix of pension funding between the Kentucky Teachers’ Retirement System (KTRS) and Kentucky Retirement Systems (KRS). The final budget contains a blend between what the House and Senate had proposed (see graph below for how the plans compare). It includes an amount close to 100 percent of the actuarially required contribution (ARC) for KTRS and $185.8 million above the ARC for KRS over the biennium. 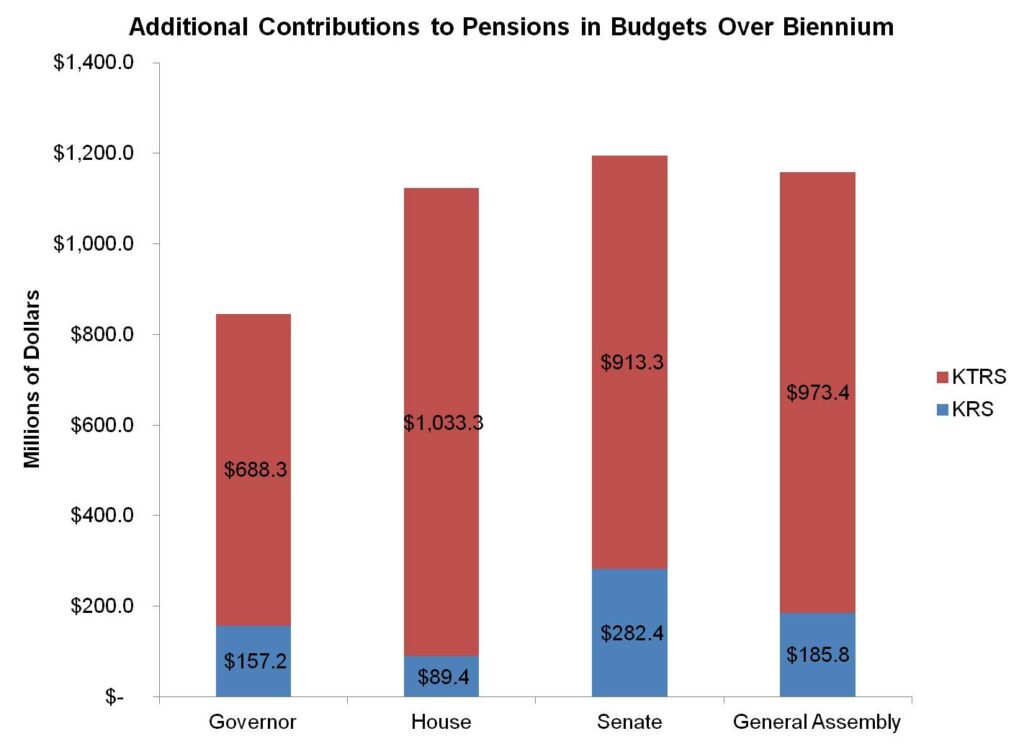 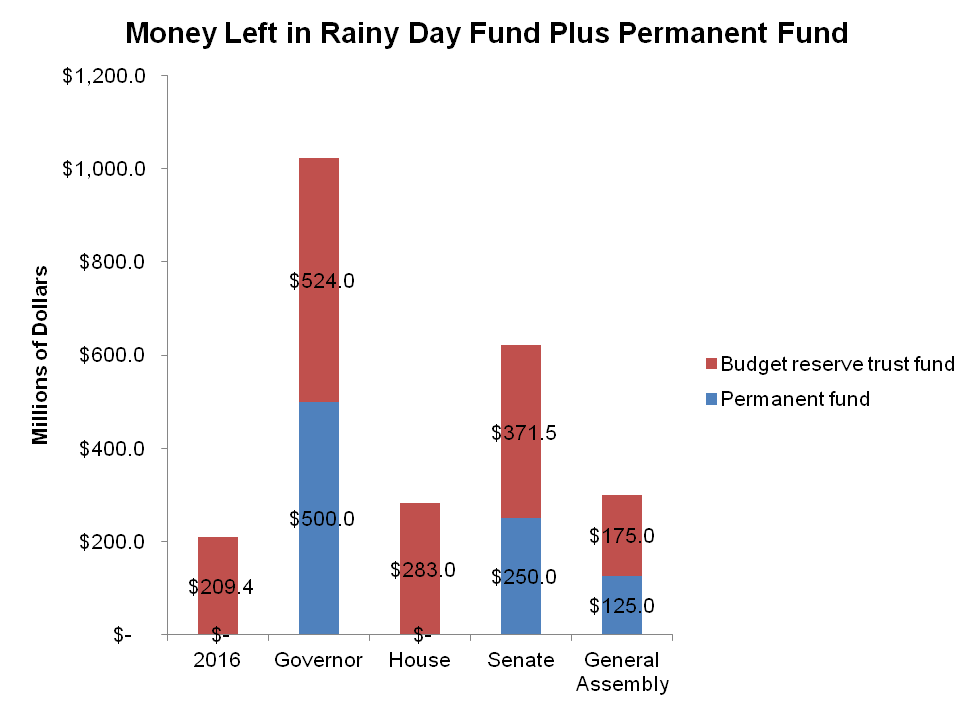 The budget is now in the governor’s hands, and he can either veto it outright (which would require calling a special session to enact a new budget) or line item veto particular language and funding items. If he vetoes language in particular budget areas, it would give the governor or specific agencies more flexibility in how monies are spent. The governor’s vetoes cannot be overridden by the legislature.

Line item vetoes of any entire budget units would increase the General Fund’s undesignated balance and those monies are allocated according to what’s called the General Fund surplus expenditure plan (if language is not vetoed for that process). The plan says monies must go first to necessary governmental expenses like natural disasters. Then in 2017 the remainder is split evenly between the state’s rainy day fund and the permanent pension fund. In 2018 the remainder is split with half going to the state’s rainy day fund, 25 percent to KTRS and 25 percent to KERS.