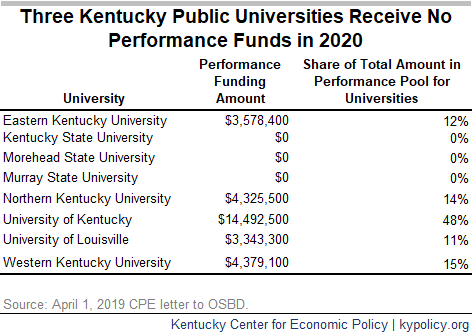 New information about the distribution of performance funds for Kentucky’s public postsecondary education institutions again raises concerns about the model, particularly given its implementation in the context of continued state budget cuts. In 2020, smaller institutions and some that serve students with greater challenges to degree completion — including a greater share of low-income students and students of color — are receiving no performance funds, much like in 2019.

Among those receiving no performance monies are the state’s historically black university, Kentucky State University, and institutions serving eastern Kentucky including Morehead State University and the region’s four community and technical colleges.

These distributions are being done in accordance with the passage of SB 153 in 2017 that established the performance funding formulas (one for public universities and one for the community colleges) and how they would be implemented over a three-year period. The formulas include student success outcomes such as degree completion as well as metrics related to volume such as the number of student credit hours earned. While additional weights are provided for low-income students and students of color in the models, we have argued they do not fully account for the ways that economic challenges erect barriers to meeting these goals.

Also similar to 2019, the distribution of performance funds for the Kentucky Community and Technical College System (KCTCS) in 2020 includes no funds for six community colleges that serve students with among the most significant barriers to higher education success, including due to being located in the state’s economically distressed coalfields: Ashland, Big Sandy, Hazard, Henderson, Madisonville and Southeast community and technical colleges. Last year, Ashland received a small amount of performance funding and Maysville received no performance funding (this campus received $473,800 in 2019). 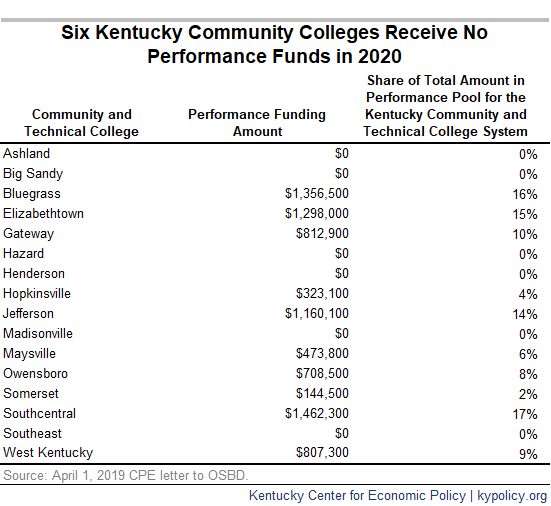 Although the performance funding model is still in the phase-in process, with relatively small amounts of funding at risk for each institution (two percent of base funding will be at risk in 2021), starting in 2022 such stop-loss provisions are scheduled to sunset. This is concerning given how unevenly institutions are performing according to the formulas’ metrics. Also it’s important to keep in mind that while institutions may potentially lose little base funding in 2020 and 2021, they’ve already been rapidly losing state funds since 2008. Total state funding cuts for Kentucky’s public postsecondary institutions are 35% (in inflation-adjusted dollars) between 2008 and 2020, and the distribution of performance funds described above means the cumulative cuts are greater for some institutions than they are for others.

The performance funding model is scheduled to be revisited after 2021 and some conversations have apparently already been happening about possible changes. Given that a number of our public institutions are losing out in the model at the same time they will need to brace themselves for additional cuts in the upcoming state budget — on top of increased pension payments going into effect at the regional institutions — the changes to the model need to be substantive and accompanied by a state reinvestment in public higher education. If not, we risk putting more barriers in front of the students facing the biggest challenges to a degree.