Click here to download a PDF of KCEP’s analysis of the Free Conference Committee Report on the budget.

The state budget passed today by the General Assembly for fiscal years 2019 and 2020 is very similar to the House’s budget proposal. Like the House proposal, the budget agreement – and accompanying revenue bill – includes substantial cuts in many areas but also raises a small amount of revenue and relies heavily on fund transfers in order to limit some cuts and make additional investments in a few areas.

The governor still has the authority to line-item veto portions of the budget between now and the final legislative days, which, in turn, the General Assembly can override with a majority vote in both chambers.

In fully funding the actuarially required pension contributions, the budget agreement matches the House’s and exceeds the Senate’s funding proposals. It provides full funding for the Kentucky Retirement System (KRS) plans, which is an increase in dollars compared to the 2016-2018 budget due to the KRS board adopting more conservative actuarial assumptions. The budget also funds teacher pensions at the level proposed by the Teachers’ Retirement System (TRS) and does not, as was proposed in the Senate plan, shift monies from TRS to other systems.1

The compromise budget funds the state’s portion of health insurance premiums for retired teachers who have not reached the Medicare eligibility age for 2019 only, and for 2020 requires the Teachers’ Retirement System Medical Fund to pick up that cost.

SEEK (Support Education Excellence in Kentucky), the primary source of state funding for K-12 schools in Kentucky, receives some additional funding (primarily because of the increase in pension funding) though at an amount between the House and Senate versions and at a level that is still a reduction once inflation is taken into account. As seen in the graph below, the inflation-adjusted per-pupil total SEEK funding amount in the budget is actually 16 percent below what it was in 2008.

In the compromise budget, total Family Resource and Youth Services Centers’ (FRYSC) funding increases a small amount. FRYSC funding is divided between the Education and the Health and Family Services (CHFS) budgets. In the education budget, FRYSCs are appropriated $48.9 million per year in each version of the budget, which is less than what was budgeted in the last biennium by $3.3 million. However, in the CHFS budget, the $9.8 million increase from the House version (that the Senate stripped) is restored, resulting in a combined increase of $13.3 million across the biennium, compared to what was budgeted in 2018. Also in fiscal year 2019, 31 school districts will be given extra funding to offset some of the decline in revenue due to coal losses – the particular portion that was lost due to a change in assessments of unmined mineral taxes.

The state’s two need-based scholarships, the College Access Program and the Kentucky Tuition Grant, see a boost of $9.5 million across the biennium compared to the House proposal, which was already an increase over the previous biennium. This means just shy of 16,000 new scholarships will become available to Kentucky students compared to the previous biennium. Funding for the Kentucky Center for Mathematics, which was zeroed out under previous proposals, is included.

The compromise budget includes additional funding to hire social workers and provide them with raises, as have previous versions of this budget. The budget also includes monies to lift the moratorium on Kinship Care, the program that provides stipends to relatives raising children removed from their parents’ custody.

The budget agreement includes an increase in the state’s responsibility for the Kentucky Children’s Health Insurance Program (KCHIP) to account for the expected rise in the state’s share of the health care program. KCHIP has been funded 100 percent by the federal government since 2014, but will phase back to approximately 79 percent starting in 2020, so the budget proposes $12 million in that fiscal year to meet the required state match.

The compromise budget keeps a $10.5 million increase in each fiscal year that was also in the House and Senate proposals in order to increase reimbursements for Supports for Community Living (SCL) Waiver providers. The increase draws down an additional $24.5 million match in federal funds. It also retains the increased funding for the Acquired Brain Injury Long Term Care (ABI-LTC) Waiver by $2.6 million in 2020, which will be matched by an additional $6.3 million in federal funds to provide 118 new slots to reduce the current waiting list of 207 for those services.2

The compromise budget makes some additional investments in the state’s criminal justice system. The Department of Public Advocacy, Commonwealth’s and County Attorneys and Department of Corrections (DOC) receive some additional funds. The funding increase for the DOC, due to a projected increase in the state inmate population, is in line with what the Senate proposed (less than the House proposal) based on provisions for more inmates to be housed in less-expensive local jails and no funding for private prisons.

Like the House budget, the General Assembly compromise protects a number of areas from cuts, including the state police and Veterans’ Affairs. It also prevents some important programs from being eliminated such as poison control, the Kentucky Mesonet weather monitoring program and the legal aid program, Access to Justice. Libraries and Archives funding remains at  levels comparable to the current fiscal year; the budget does not cut $2.5 million each fiscal year from the per capita grants to local libraries, as had been proposed in previous versions.

Other Areas Cut by 6.25 percent or Eliminated as Governor Proposed

Most other programs received 6.25 percent cuts, ranging from the Department for Aging and Independent Living to the Property Valuation Administrators. Funding for many programs was eliminated altogether, including the Commission on Women and the University Press of Kentucky. Funding was provided for the Robinson Scholars program for only the first year of the budget. A number of specific education funding streams were also cut by 6.25 percent including preschool and extended school services. The well-publicized K-12 education programs zeroed out in the compromise budget agreement include:

Similar to the Senate budget, the budget agreement makes 6.25 percent cuts to higher education that were not in the House budget proposal. Like the Senate, the budget agreement then adds some of the funds that were cut from the traditional funding model for higher education institutions to the Postsecondary Education Performance Fund for which institutions must compete. Even with these performance-based funds included, funding for the state’s postsecondary institutions has declined by 35 percent since 2008, once adjusted for inflation. 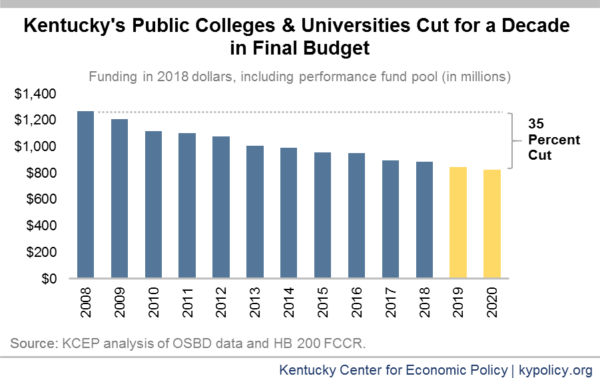 The budget agreement keeps the Senate’s cut to the Work Ready Scholarship from $14 million to $2.5 million in each fiscal year and the Dual Credit Scholarship is cut in half to $5 million each year. These scholarships have been underutilized compared to original projections. The final budget eliminates several scholarship programs altogether including:

Pays for Budget with Revenue Bill and More Fund Transfers

Much of the costs associated with the avoided cuts and increases in other areas are paid for by revenue raised through HB 366, which purports to raise $240 million a year through a variety of changes to the tax code.3 The money it does raise, it will do so in a way that is less reliable over time, and that worsens regressivity in our tax system (asking less of the wealthy and more of everyone else).

Like previous versions, the budget relies heavily on transfers from other parts of state government to fill holes. With $593 million in total transfers the agreement mirrors the Senate proposal and is less than what the House proposed ($759 million). $310 million comes from the Kentucky Employees Health Plan as was in the Senate plan, compared to $481 million in the House budget. The budget also designates all Kentucky Wired funding as a necessary government expense, which means there is no budget line item for these expenditures. That will reduce amounts available for the budget reserve trust fund (otherwise known as the “rainy day fund”) by up to $2.8 million for the current fiscal year, $33.4 million in fiscal year 2019, and $34.2 million in fiscal year 2020. Funding these items in this manner increases Kentucky’s already large structural deficit.

The final budget agreement increases monies set aside in the rainy day fund, providing $87 million in 2019 and $209 million in 2020. Combined across the biennium, this is $42 million more than the House and $50 million more than the Senate proposed, but at 2.7 percent of projected General Fund revenues for 2020, still leaves the fund short of its statutory target of 5 percent.

The governor has 10 days to either sign the budget bills, veto them in their entirety or exercise his line item veto authority and remove only certain provisions. Appropriations bills are the only bills where the governor can exercise a line item veto. The legislature will then have a chance when they come back for the final days of the legislative session to override any vetoes exercised by the governor.