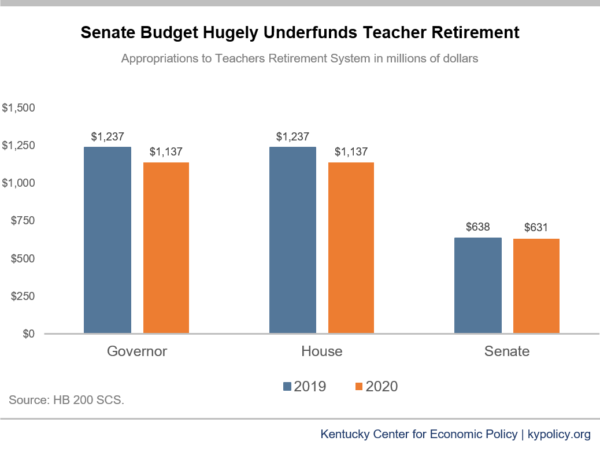 The Senate budget massively underfunds the Teachers’ Retirement System (TRS) by more than $1 billion over the biennium, falling substantially short of making the actuarially required contribution (ARC). At the same time, it increases funding to the Kentucky Employees Retirement System (KERS) non-hazardous plan and State Police Retirement System (SPRS) far beyond their actuarially required contribution amounts. Also, since the Senate plan generates no new revenue, it includes cuts to services including K-12 education and higher education beyond what the House had proposed.

The Senate proposes to fall short of what is actuarially required to contribute to TRS. As shown in the graph below, the plan’s total contribution to the system is $598 million less in 2019 and $506 million less in 2020 than what the House and governor proposed. That’s only about half the required funding, and is the approximate level of contribution the state was making prior to 2017 that led the pension system’s funded ratio to decline. Also, the state would not fund the premium support for under-65 retired teachers in either year of the Senate budget, requiring the TRS medical fund to draw from its reserves to pick up those costs. The House budget required TRS make that payment only in the second year of the budget.

The Senate budget then makes payments to the KERS non-hazardous plan and the SPRS plan substantially beyond the ARC. The ARC was already increasing steeply for those plans because of assumption changes made by the Kentucky Retirement Systems board, rising from 47.28 percent of pay to 83.43 percent next year for KERS non-hazardous, for example. The Senate budget makes that contribution plus an additional $526 million in 2019 and $492 million in 2020 to the two systems combined. The result is a contribution that goes far above the requested ARC.

The Senate does not include the estimated $250 million in revenue increases that the House proposed. They include a small increase in the waste tire fee that generates $3 million, which the budget then moves to the General Fund. The Senate freezes the film tax credit and tourism tax credits for two years, as the House proposed. They also increase the fees large counties and cities pay property valuation administrators for the use of the tax rolls, which will help offset cuts to the PVAs.

Also like the House and the governor, the Senate increases monies set aside in the rainy day fund. The Senate adds about $4.4 million more to the fund than the House had proposed ($246 million total) for an ending balance in 2020 of $254 million. This balance is about 2 percent of the state’s General Fund revenues, lower than the statutory target of 5 percent.

With moderately less in fund transfers and hardly any new revenue compared to the House budget, the Senate balances its budget with deeper cuts, as described below.

Senate shorts education funding compared to what the House proposed

The Senate budget provides less funding for K-12 education than what the House had proposed. In particular, the Senate’s plan includes $71.8 million less in 2019 and $80.9 million less in 2020 for Support Educational Excellence in Kentucky (SEEK), the core funding formula for schools. That includes less money in the base SEEK appropriations, as well as a portion of the pension payments mentioned above that are included in SEEK. This puts per-student SEEK funding 17 percent below 2008 levels once adjusting for inflation. The budget does include special language appropriating monies to 14 eastern Kentucky school districts that have seen steep loss in property tax receipts due to the decline in value of unmined minerals, but for 2019 only and not 2020.

For higher education, whereas the House budget did not cut universities and community colleges, the Senate budget cuts higher education institutions by 6.25 percent. In total, the Senate funds higher education institutions $35 million less in 2019 and $48 million less in 2020 than the House proposed. By 2020, Kentucky will have reduced funding for higher education since 2008 by 35 percent after adjusting for inflation. On top of that, most institutions will be facing steeply increased pension contributions due to assumption changes made by the Kentucky Retirement Systems board. The Senate did increase the amount of dollars in a performance funding pool compared to the House proposal, but universities must compete for those funds. Whereas the House put no funding in the pool for 2019 and $7.7 million in 2020, the Senate budget proposes $23.6 million in 2019 and $31.3 million in 2020. The Senate budget also funds the Kentucky Center for Mathematics, but the University Press of Kentucky and Robinson Scholars are unfunded in their budget.

One point of departure from the Senate’s divestment in education is an increase in funding for the need-based College Access Program and the Kentucky Tuition Grant by $11.2 million across the biennium compared to the House proposal, which was already an increase over the previous biennium. The resulting increase would mean just shy of 17,000 new scholarships would become available to Kentucky students compared to the previous biennium.

Budget maintains some previous funding increases, changes funding for a number of other areas

Like the House budget, the Senate provides additional monies to hire social workers and provide them raises. The proposed budget also includes monies to lift the moratorium on Kinship Care, the program that supports relatives raising children who are removed from their parents’ custody. Kinship Care enrollment has been frozen since 2013 due to lack of resources.

The Senate keeps a $10.5 million increase in each fiscal year to increase reimbursements for Supports for Community Living (SCL) Waiver providers, thereby drawing down an additional $24.5 million match in Federal Funds. The Senate also proposes increased funding for the Acquired Brain Injury Long Term Care (ABI-LTC) Waiver by $2.6 million in 2020, which would be matched by an additional $6.3 million in Federal Funds to provide 118 new slots to reduce the current waiting list of 207 for those services.[1]

The Senate accounts for the upcoming increase in the state’s responsibility for the Kentucky Children’s Health Insurance Program (KCHIP). KCHIP has been funded 100% by the Federal government since 2014, but will phase back to approximately 79 percent starting in 2020, so the Senate budget proposes $12 million in that fiscal year to meet the required state match.

The budget provides the additional funding to the Department of Public Advocacy the governor and House also included and the increase for commonwealth and county attorneys that the House proposed. The Senate also shields the state police and veterans’ affairs from the 6.25 percent budget cuts that hit many agencies.

Funding for state prisons is lower in the Senate budget than in the House version — $15 million less in 2019 and $22 million less in 2020. This is not due to lower projections of the state’s growing inmate population but because the Senate proposal specifies that prior to the issuance of any private prison contract, all available jail beds have been utilized to the fullest extent possible. Housing inmates in local jails is less expensive than in private prisons and the Kentucky Jailers Association claims there are currently some additional jail beds not being utilized and some additional beds expected to become available. Other statements by the Justice Cabinet are that Kentucky will run out of bed space sometime in 2019.

Other components of the Senate budget include:

Like previous versions of the budget, the Senate plan cuts many services and agencies by 6.25 percent and includes no employee raises over the next two-year period — meaning no raises for 8 of the last 10 years.

[1] Waiting list for ABI-LTC from a presentation to the Medicaid Oversight and Advisory Committee by the Kentucky Cabinet for Health and Family Services, Aug. 17, 2017.