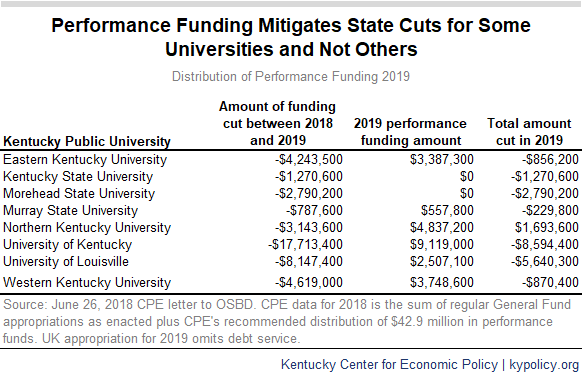 New higher education data showing the allocation of performance funds in 2019 to our public universities and community colleges underscores the concern that some institutions are disadvantaged in the performance funding models. Smaller schools serving students with greater economic challenges will receive few if any of these dollars in 2019.

Round after round of state budget cuts to higher education, including an approximately 6 percent reduction in 2019, have impacted all institutions, leading to fewer programs, faculty and staff as well as tuition increases. Though Kentucky’s 2017 performance funding law did not require any state funding to our public universities and community colleges to be conditional in 2019, the 2018-2020 state budget included performance funds to be distributed for 2019 ($24.2 million for universities and $6.8 million for community colleges). These resources will help mitigate the 6 percent base funding cuts for some institutions while leaving others behind.

Lawmakers could have chosen to cut institutions less across the board instead of making them compete for funding based on inequitable metrics. Kentucky’s performance funding formulas (one for universities and one for community colleges) include student success outcomes such as degree completion as well as metrics related to volume such as the number of student credit hours earned. While additional weights are provided for low-income and underrepresented minority students in the models, we have argued they do not fully account for the ways that economic challenges erect barriers to meeting these goals. In the 2019 competition, community colleges with particularly disadvantaged populations, such as in the state’s economically distressed coalfields, will receive no additional funds: Big Sandy, Hazard, Henderson, Madisonville, Maysville and Southeast community and technical colleges.

Among our public universities, Morehead and Kentucky State — which have the largest percentage of undergraduates receiving a Pell grant (federal need-based financial aid) — are the losers, receiving no additional funds. Murray also receives very little additional funding. The table below shows how the performance funding impacts each public university’s state funding in 2019.

The state budget for higher education didn’t create any real winners given all public institutions had their base funding cut, but it did create losers when it distributed some additional funds through the performance funding formulas. Schools serving smaller, lower-income communities receive fewer needed resources in 2019 to help students reach their goals.

Many Kentuckians Face Hunger and Hardship This Thanksgiving. They Need Relief.

Letter to Governor Beshear: Priorities for Use of Remaining Coronavirus Relief Fund Monies

Kentucky Not Prepared for Next Recession

Share this ArticleLike this article? Email it to a friend!
Email sent!
We use cookies to ensure that we give you the best experience on our website. If you continue to use this site we will assume that you consent to the use of cookies.OkPrivacy policy