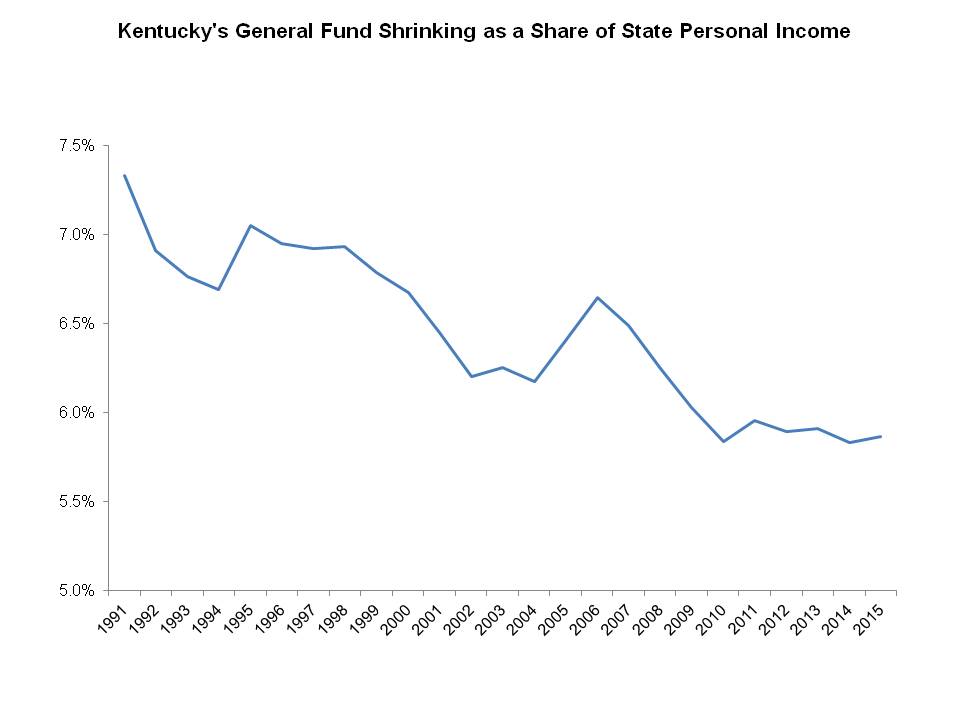 The good news is Kentucky’s economy grew faster in budget year 2015, and tax revenue grew with it — by $505 million, or 5.3 percent, compared to budget year 2014. Individual income growth, high corporate profits, increases in consumer spending and a strong stock market contributed to the new revenue.

The bad news is erosion in our state tax system, widespread needs in the budget and the necessity of putting much more money into our underfunded employee pension systems mean that economic growth is not nearly enough to right Kentucky’s fiscal ship. The graph below depicts a long-term downward trend in which the revenue we have to invest in P-12 education, our state universities and community colleges, health care, public safety and other services is not keeping up with our economy, even during good times.

Source: KCEP analysis of data from Bureau of Economic Analysis, Office of the State Budget Director.

That’s important because to sustain a certain level of investment in our kids, workforce and communities, revenue needs to roughly keep pace with economic growth in order to stay in line with the cost of providing public services. If revenue decreases relative to the economy, as the above trend shows Kentucky’s revenue has done over the last few decades, then the quality and quantity of those investments are affected.

More recently, the data show that revenue has stagnated as a share of the economy since the recession, and that even 2015’s strong revenue growth wasn’t enough to improve that ratio. In 2015, revenue was 5.9% of state personal income. In 1991, a year after the General Assembly passed the Kentucky Education Reform Act (KERA) with tax increases to generate new money for more equitable, quality K-12 education, revenue was 7.3 percent of personal income. And while that may not seem like a big difference, in a $170 billion economy it equals about $2.5 billion less in state tax revenue. As a result, Kentucky finds it hard to even sustain the investments in education and other areas we have committed to support.

The reasons for the trend are clear. Large income tax deductions and exemptions that primarily benefit higher-income people leave the state with hundreds of millions of dollars less each year. Likewise, proliferating business tax incentives and corporate tax loopholes do not pay for themselves.

Another big reason is that our tax laws haven’t kept up with a fundamentally changing state and economy. Even though people are buying more services and less goods, the vast majority of services are exempt from the sales tax in Kentucky. And as our population ages, Kentucky’s generous retirement income tax exclusion is growing more costly.

Kentucky will develop new revenue forecasts for this year and the next two budget years in the coming months. An interim forecast released by the state last week predicts growth of only 3.2 percent in the first three quarters of the new fiscal year, less than last year’s 4.1 percent over that same time period.