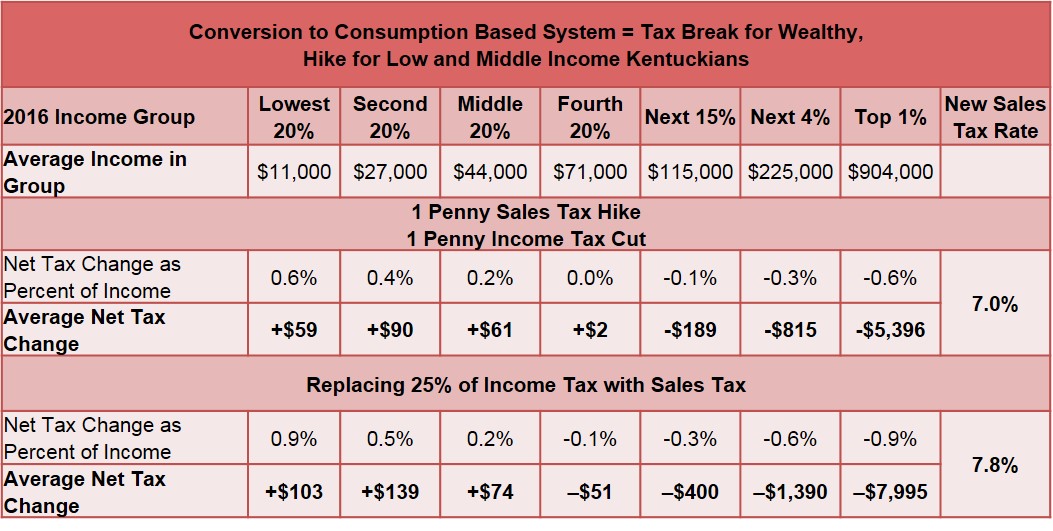 The details of Governor Bevin’s study on tax reform are unknown, but there are indications the administration intends to begin shifting Kentucky away from income taxes towards sales taxes as suggested by involvement from the out-of-state architect of Kansas’s tax shift, as well as the Governor’s own repeated preference for this approach. Kentuckians should be concerned that such a proposal will cut taxes at the top, require low- and middle-income families to compensate and leave us with less to invest in our schools, infrastructure, services for elderly and vulnerable Kentuckians and other building blocks of thriving communities.

Sales tax-heavy systems are “upside-down” because they ask more from those who have less. A tax shift from income/production to sales/consumption taxes would therefore mean a big tax cut for those at the top. And for reasons including that income and purchasing power for low and middle-income Kentuckians have been largely stagnant in recent history, sales taxes just don’t grow as well as income taxes. Consequently, income-to-sales tax shifts mean less revenue over time, leading lawmakers to further cut investments in our state and increase sales taxes even more.

Who Pays for Tax Shifts

The table below shows the impact, by income group, of two such hypothetical shifts. Notice that even when the shift is seemingly minor – one penny less on the dollar for the top income tax rate and one penny more on the sales tax rate – the top one percent of households get a $5,396 tax cut on average while the bottom 60 percent of Kentuckians pay more, with the highest percentage increase in taxes going to the poorest 20 percent of Kentuckians. The average tax cut for the top one percent grows to nearly $8,000 if 1/4 of the income tax is replaced with a higher sales tax. 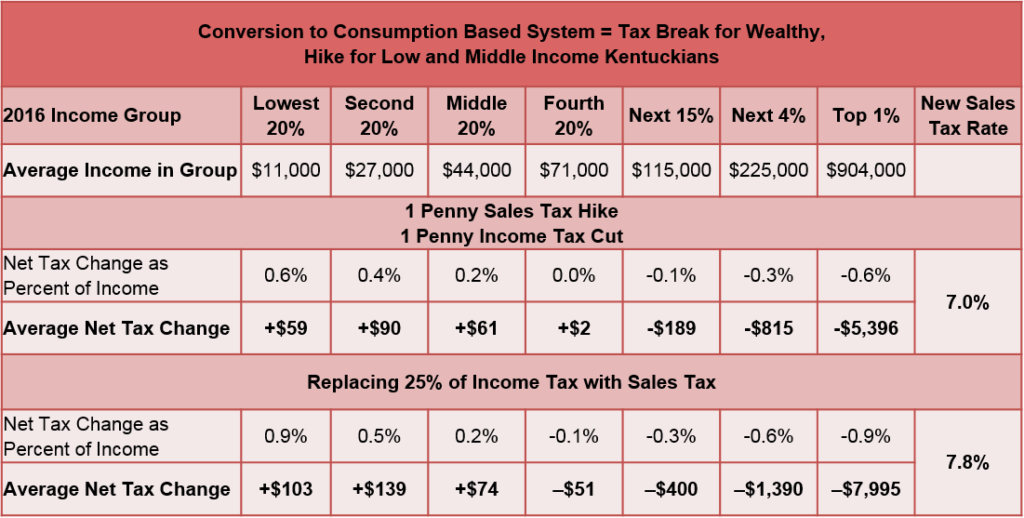 These shifts would exacerbate Kentucky’s already upside-down state and local tax system (see graph below). Today, the wealthiest 1 percent of Kentuckians pay 6 percent of their income in state and local taxes, while families in the middle and bottom quintiles pay 10.8 and 9 percent, respectively. Instead of making our system even more regressive by cutting income taxes, we could make it more reliable by cleaning up tax breaks. 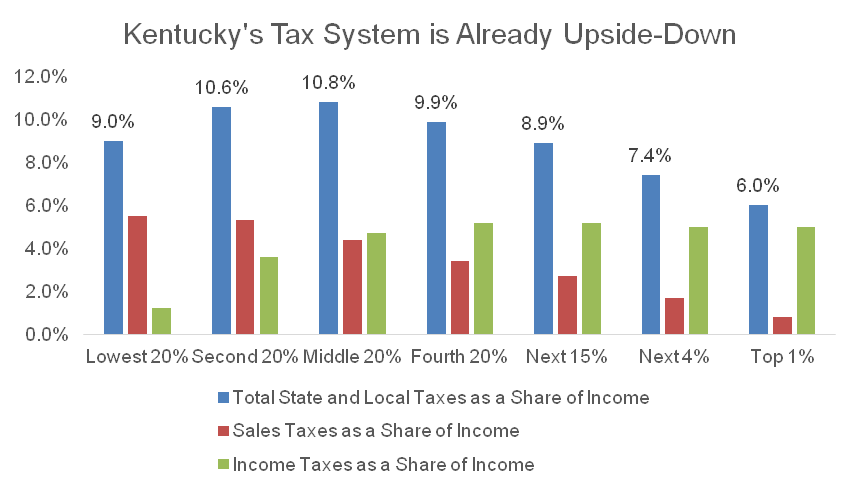 Tax Shifts Cost Us All

As a result of our currently upside-down tax system and other factors, Kentucky already has trouble generating revenue to invest in shared prosperity. Our core funding for K-12 students has been cut deeper than the vast majority of states and higher education has become much less affordable, for example. A shift from income to sales taxes would lead to more and deeper budget cuts and crises.

The idea  we could cut taxes at the top and increase revenue at the same time is misguided and dangerous. Tax cuts/shifts do not pay for themselves: we all pay for them, now and well into the future.