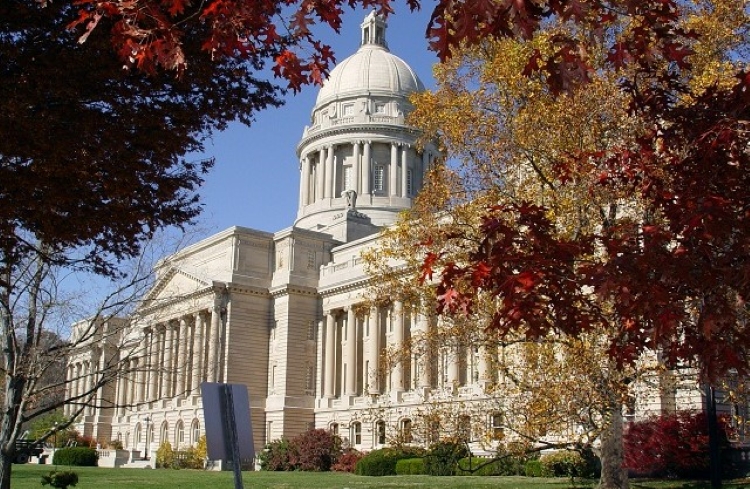 Driven by a strong economic recovery and by high inflation, the state ended the year with a General Fund surplus of $1.034 billion more than projected. These extra dollars are likely temporary, but because of House Bill 8 (HB 8) passed in the 2022 legislative session, they will trigger a permanent and expensive reduction in the individual income tax rate — Kentucky’s largest revenue source — if the General Assembly chooses to let the cut go into effect.

Especially given concerns about a possible recession, the legislature should not shortchange future budgets and hamper the state’s ability to fund schools, health and other needs by allowing hard-to-reverse tax cuts to become law.

HB 8 will reduce the state’s 5% individual income tax rate by up to 0.5 points per year if two conditions are met:

The first potential rate cut due to HB 8 is calculated based on data for fiscal year 2021, which ended last summer. At that time, the rainy day fund equaled 15% of General Fund receipts (thereby meeting condition #1), and receipts exceeded the appropriations and costs mentioned in HB 8’s condition #2 by an estimated $323 million. That will trigger an automatic reduction in the individual income tax rate from 5% to 4.5% starting Jan. 1, 2023, costing Kentucky’s General Fund approximately $594 million annually when fully phased in.

The second potential rate cut from 4.5% to 4% is calculated based on fiscal year 2022 that ended on June 30th. With the new surplus, the rainy day fund balance has grown to $2.7 billion or 18.4% of 2022 General Fund revenues, meeting condition #1. Receipts exceeded the appropriations and costs mentioned in condition #2 by an estimated $962 million. With both conditions met, there is now expected to be another reduction in the individual income tax rate to 4% starting Jan. 1, 2024 if — as stipulated under HB 8 for this and any subsequent rate cuts — the General Assembly takes action.

If the General Assembly implements the reduction from 4.5% to 4%, the total annual cost of HB 8 will exceed $1.1 billion (counting the small amount of new revenue HB 8 raises from sales taxes on services). That’s a loss of 1 out of every 13 dollars in the state’s budget, a hole close to what the state spends annually on all 8 universities and 16 community colleges.

Strong revenue receipts are due in significant part to the aggressive federal stimulus provided by the CARES Act, American Rescue Plan Act (ARPA) and other pandemic relief measures. As the federal government provided stimulus checks, expanded unemployment benefits, forgivable business loans, state and local government fiscal relief and more, it stimulated job growth and spending that temporarily enhanced state income, corporate and sales tax revenues. However, that stimulus will not continue; many of those relief programs have now expired and much of the money has been spent.

A second major factor driving larger than normal tax receipts is the current high level of inflation. As purchases become more expensive and wages rise, sales and income tax receipts increase. However, inflation is primarily the result of pandemic bottlenecks in goods production, the war in Ukraine and other temporary factors. Most observers expect inflation to decline in the coming months.

As those factors ease, the pace of revenue growth will likely cool. The Federal Reserve is responding to inflation by aggressively raising interest rates, which creates considerable risk of pushing the economy into another recession. If that happens, state revenue growth will tumble, and Kentucky will be scrambling for dollars to patch budget holes just as we did after the Great Recession in 2008.

HB 8 depends on a rosy expectation that the state will always have plenty of revenue to address future needs. But as the periods prior to current surpluses show, Kentucky has more often been in a position of lacking revenue, forcing the legislature to make program cuts and scramble to pass balanced budgets. Decades of state tax cuts and tax breaks have eroded our ability to fund services, a problem that will become evident again once temporary conditions have passed.

The factors bolstering current revenues will not last, and the severe reduction in revenues from the state’s largest source will make Kentucky far less able to weather challenges that are sure to come. The next General Assembly should not authorize additional tax cuts and instead should protect Kentucky’s ability to provide good schools, improved health and a better quality of life.