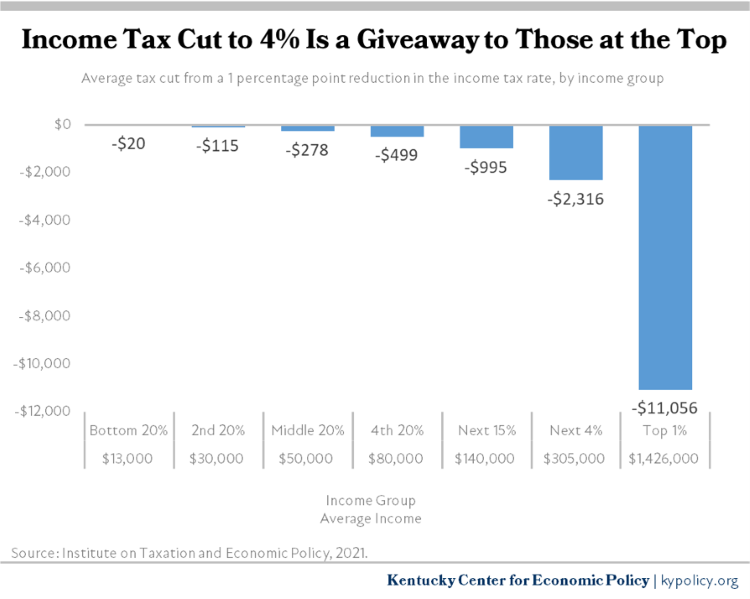 The General Assembly passed a new version of House Bill 8 (HB 8) that is expected to reduce the individual income tax rate by 1 point over the next couple of years at a cost of $888 million over the biennium and that includes triggers for potential additional 0.5 point cuts in the future. The plan will disproportionately benefit the wealthy and create a growing budget hole that undermines investments in public education, human services and other public needs.

The first 0.5 point cut depends on 2021 revenues, and it is expected to go into effect automatically.1 The budget that passed the legislature leaves over 10% in the BRTF this year, allowing the first condition to be met in future years as long as that level is maintained. Kentucky currently expects a large budget surplus at the end of June this year, meaning another 0.5 point cut is expected to be triggered in tax year 2024, though under HB 8 the General Assembly will need to approve it. The result will be a 4% income tax rate (down from the current 5%) at a cost of $1.2 billion annually by 2025.

HB 8 creates perverse incentives for budget decisions beyond that. It provides an incentive for maintaining at least 10% of receipts in the BRTF in the future even if that means leaving immediate critical needs unaddressed. HB 8’s trigger also bases tax cuts around budget surpluses, which most often occur because of the difficulty in making accurate forecasts rather than because of strong economic or revenue growth. And there is an incentive to keep appropriations low in order to make room for additional income tax cuts. In effect, these mechanisms make a goal out of limiting investment in public needs.

It’s important to note that Kentucky has temporary surpluses that are the result of the stimulus provided by the American Rescue Plan Act, CARES Act, and other pandemic-related federal relief, and there is tremendous uncertainty about revenues after that stimulus fades. HB 8 goes beyond giving away the one-time surplus by taking money from future budgets through permanent cuts in the income tax rate starting next year.

HB 8 is based on a disproven economic theory that income tax cuts will attract people and businesses. That belief wreaked havoc in Kansas, which had to roll back its income tax cuts after just five years when they spurred a budget crisis. Arizona, North Carolina, Ohio, Maine and Wisconsin also cut their income taxes at the same time and had to make budget reductions after their economies grew slower than the national average. Seven of the 10 states with the highest rates of domestic in-migration over the last decade have income taxes, most with higher top rates than Kentucky. Surveys find that taxes are also not a major factor in business location decisions, while tax cuts take resources away from investments in education, infrastructure, public health and other essentials for business growth.

The large budget hole caused by HB 8 will create pressure down the road to raise the regressive sales tax and apply it to currently exempt items like groceries, utilities and prescription drugs, force budget cuts to schools, health, infrastructure and other needs, or both.

HB 8 is a giveaway to the wealthy

While claims are being made that the tax cut in HB 8 will help people address rising prices of food, gas and other needs, those most harmed by rising costs are completely left out despite the fact they pay higher total state and local taxes as a share of their incomes than the richest Kentuckians.

Seniors. Also exempted from the income tax in Kentucky is Social Security income and the first $31,110 of other retiree income. That means HB 8 will provide tax cuts to very few of Kentucky’s 547,000 retirees. The median non-Social Security retirement income in Kentucky is only $12,000 and income at the 75th percentile is just $26,000.

The income tax funds 40% of Kentucky’s state budget, and cutting it substantially as HB 8 does will damage our ability to fund crucial public services. It is a fiscally harmful plan that will benefit the powerful few while hurting the foundational investments that help all Kentuckians thrive.