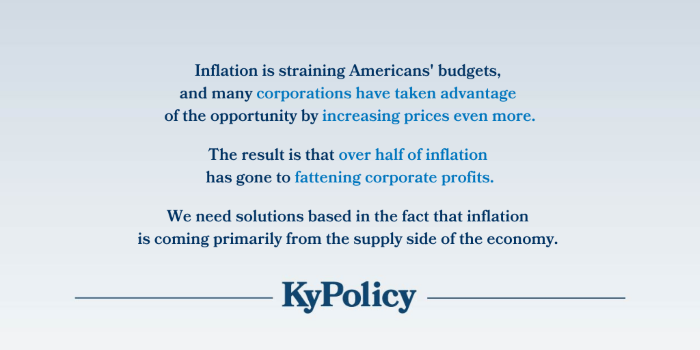 Inflation is straining Americans’ budgets. While the immediate cause is the COVID-19 pandemic, the preexisting condition of corporate-driven policy choices over recent decades has made the problem much worse. A solution will tackle those underlying challenges and avoid creating more pain for those already struggling.

The issue arose after the COVID-19 pandemic brought our economy to a halt in the spring of 2020. When people began spending again, health concerns led to completely different buying patterns. Spending shifted from services to goods as people cancelled gym memberships and purchased home exercise bikes instead, or skipped eating out and bought cookware.

While demand for goods was up, the coronavirus sent a jolt through supply chains. COVID-19 resulted in plant shutdowns, worker illnesses and deaths, and shuttered schools and child care centers that pushed parents out of the labor market.

Since the 1980s, policy choices advancing corporate globalization, consolidation and deregulation made the system more vulnerable to these shocks. Lax antitrust enforcement has resulted in handfuls of large corporations now controlling entire industries, and their reliance on dispersed, low-paid, just-in-time production made the entire supply chain more fragile. When crisis hit, the system failed, creating bottlenecks and shortages that have driven prices up further.

As prices rose, increasingly monopolized industries took advantage of the opportunity by increasing prices even more, as proudly described on shareholder calls. The result is that over half of inflation has gone to fattening corporate profits. Many companies are using that gain for stock buybacks to enrich their executives even as consumers face the pain of higher prices for food, gas and other necessities.

Aid to people, businesses and public services during the pandemic through the CARES Act and American Rescue Plan Act helped alleviate the pain of soaring prices, but were not the cause of it. The alternative to relief was to let the economy fall into a depression and watch hunger and homelessness soar. Inflation in the U.S. is at similar levels to Europe even though pandemic aid there was much smaller.

Our failure to contain COVID through more aggressive public health actions protracted the problem. Russia’s war on Ukraine made matters worse, pushing gas prices up another $1 per gallon in the U.S. and limiting supply of wheat, corn and other products.

Despite those ongoing concerns, most forecasters think inflation is likely to come down in the fall, and the bond markets are predicting lower inflation in the future as well. Supply chain bottlenecks are starting to ease, as evidenced by recent significant declines in the price of used cars and televisions.

And there is no evidence at this point that inflation expectations are becoming entrenched among workers, households and businesses. That’s the fear with inflation — that it will take hold and lead to a wage-price spiral.

Wage increases are not actually even a major contributor to price increases. In fact, workers’ wages make up only 8% of inflation, and wage growth has moderated recently. Employee pay has been going up, but at slower rates than prices. That’s not surprising given that worker power has been so weakened in recent decades, with only 6% of the private sector workforce now in a union.

The Federal Reserve is already acting to raise interest rates, which is beginning to cool the housing and financial markets. But there are real concerns the Fed will act too aggressively and push the economy into a recession, causing hardship to spike when we haven’t fully recovered from the last downturn.

We need solutions based in the fact that inflation is coming primarily from the supply side of the economy. With evidence that opportunistic corporations are padding their profits, Congress should empower the Federal Trade Commission to investigate price gouging just like we do in Kentucky after natural disasters, and impose a temporary excess profits tax.

At the same time, we should address kitchen table costs through help with child care, housing and prescription drugs, and by bringing back the monthly child tax credit. We must avoid making the pain worse, as the 2022 General Assembly did in passing SJR 150, which takes $350 million in federal grocery assistance away from 500,000 Kentuckians even while food prices are up.

In the longer term, we should make ourselves less vulnerable to supply shocks bound to come from future pandemics and climate change. That means antitrust actions that break up corporate monopolies and new rules and public investments that make supply chains more resilient. It means shifting aggressively to clean renewable energy and ending our dependence on wealthy fossil fuel giants.

Pandemic and war have rocked commerce, but excessive corporate power has worsened the resulting inflation. How we address it will determine what kind of economy we have on the other side.

This column appeared in the Daily Independent on May 31, the State Journal on June 1, the News Enterprise on June 3, and the Herald-Leader on June 4, 2022.