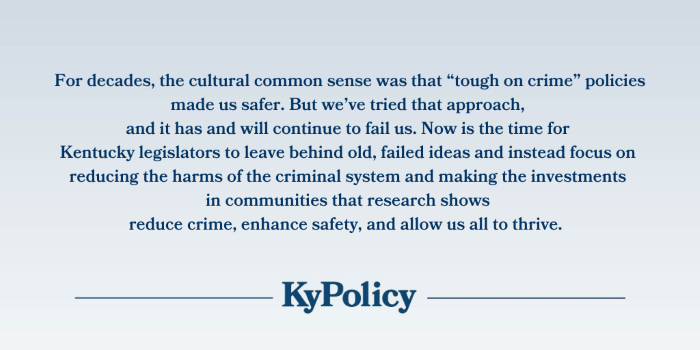 The 2022 General Assembly has a big opportunity to build on positive changes in criminal policy from last session. Increasing the threshold at which theft becomes a felony, ending the automatic transfer of some youth to adult court and making sure people reentering their communities after incarceration can get help with groceries were big wins from 2021 — worth celebrating and adding to with more laws that reduce incarceration and its harms.

Instead of making Kentucky safer, increasing incarceration hurts the people we lock up — along with their families and communities. More effective measures include improving job quality and spending less locking people up and more on early childhood education, college affordability, mental health and other public services. Unfortunately, as Kentucky has seen year after year, legislators are locked into a pattern of taking a couple steps forward only to fall many steps back. One month into the 2022 legislative session, we’ve already seen a number of bills filed and advanced that would increase criminal punishment in Kentucky.

Last December, we published an analysis showing that in the decade after the enactment of 2011’s HB 463, a groundbreaking criminal system bill designed in part to reduce incarceration, legislators passed 6 times as many laws increasing incarceration as decreasing it.

This session, we’ve seen more of the same: punitive bills filed that would increase mandatory time served for importing and trafficking fentanyl — which research shows harms people with substance use disorder and does not take down drug “kingpins” — and proposals that would create harsher punishments for minor crimes like low-level theft. Additionally, rather than proposing legislation to help address the disparate system that allows thousands of poor Kentuckians to remain in jail before trial simply because they cannot afford bail, while wealthier Kentuckians faced with identical charges can pay to get out, we’ve instead seen legislation introduced that will ban charitable bail funds that help poorer people pay their bail.

These policies will not make our communities safer, but will instead contribute to the deep and lasting harms of Kentucky’s already terrible incarceration problem. Research has increasingly shown that criminalizing more behavior and locking people up for longer does not make communities safer but does increase the likelihood of people losing their jobs, homes and children, having a greater likelihood of substance use relapses and overdoses, and experiencing other forms of hardship.

Furthermore, as we continue to observe Black History Month, we must recognize that increases in criminal punishment will continue to exacerbate profound racial disparities within the criminal system, where Black people are 8% of the population but 21% of the prison population in Kentucky. Harsh sentencing, labor segregation into undervalued jobs, heavy policing and underinvestment in Black communities are systemic factors responsible for these disparities. Yet in the absence of policy change, Black Kentuckians — as well as Kentuckians of all races — pay the price.

It’s no wonder we are where we are. For decades, the cultural common sense was that “tough on crime” policies made us safer. But we’ve tried that approach, and it has and will continue to fail us. Now is the time for Kentucky legislators to leave behind old, failed ideas and instead focus on reducing the harms of the criminal system and making the investments in communities that research shows reduce crime, enhance safety, and allow us all to thrive.

There are clear positive steps they can take. For instance, HB 218 would expand expungement so that it’s easier for people who have served time to rebuild their lives and avoid reincarceration. Another bill, SB 31, would improve pretrial justice by requiring that anyone who is detained pretrial because they cannot pay money bail has their case tried within 180 days for a felony charge or 90 days for a misdemeanor charge. We also anticipate other legislation this session to address Persistent Felony Offender laws (which needlessly, harmfully enhance sentences for people convicted with felonies) and bills to expand pretrial diversion options for people with issues like substance use disorder.

The deadline to file new bills is March 1 in the House and March 3 in the Senate, so there is still plenty of time for the General Assembly to introduce and consider more positive legislation that will reduce incarceration instead of increasing it. Through the very last day of session, legislators will face opportunities to choose the path that creates a stronger commonwealth, or the one that continues to harm us all. The General Assembly should build on the wins from last session by moving away from harsher and longer criminal penalties that don’t serve Kentucky, and enacting transformative legislation that will help Kentucky communities thrive.

This column appeared in the News Enterprise on Feb. 12 and the Northern Kentucky Tribune on Feb. 14, 2022.