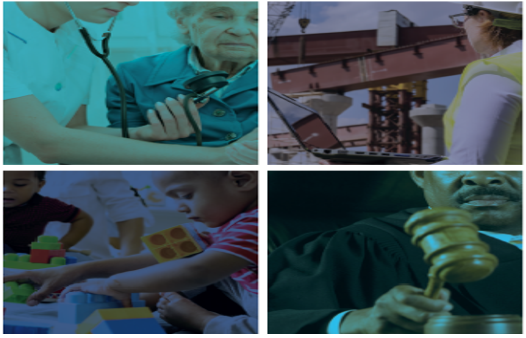 The Senate budget increases funding for the Rainy Day Fund by reducing funding for pension contributions for health departments and other areas proposed by the House in its budget. The Senate budget also withholds actuarially required contributions to the Teachers’ Retirement System (TRS) until cuts are made to new teacher pension benefits. The Senate includes only $25 million over the biennium in new revenue from a minimal vaping tax.

The Senate budget withholds $1.13 billion of the actuarially required contribution to the Teachers’ Retirement System over the biennium, proposing to park the money in the so-called Permanent Pension Fund instead. It then states that the funds cannot be released to TRS “unless there is structural reform of the TRS system,” which means cuts to benefits and a move away from the defined benefit system. The Senate budget states that if the required changes do not happen by August 1 of each year, the money will instead be contributed to the Kentucky Employees Retirement System non-hazardous plan.

In addition, the budget includes no funding for retired teacher health insurance for those under the age of 65, which the House did not provide in the second year of the budget only.

For Kentucky Retirement Systems, the budget assumes a proposed reset of the 30-year amortization in the retirement systems included in SB 249. That reduces contributions from a proposed 93% of pay to 84% in the Kentucky Employees Retirement System (KERS) non-hazardous system. The budget substantially reduces the pension funding support for quasi-governmental agencies like health departments, regional universities and community mental health centers compared to what the House proposed. For example, health departments receive $50 million over the biennium in the Senate proposal compared to $97 million in the House. The Senate budget does not adopt the “fixed dollar” formula used in the House budget based on HB 171 that differentiates quasi-governmental agency contributions based on their actual liabilities with significant winners and losers.

The Senate provides a 1% raise for most all state employees in 2021 (except constitutional officers) and makes another 1% increase in 2022 contingent on the revenues meeting or exceeding the official forecast at the end of the 2021 fiscal year. The House ensured a 1% in each year of the biennium. State employees have not received across-the-board raises for 8 of the previous 10 years. The Senate also provides cost of living raises for state police and employees of the state police lab.

The Senate budget includes slightly more overall for SEEK, the state’s core K-12 funding, than the House had proposed, but slightly less than what was included in the governor’s proposal, as shown in the graph below. The Senate leaves the decision about pay increases for teachers up to each district, but requires a 1% raise for non-teacher employees. This is in contrast to the House’s 1% increase required as part of base SEEK and the governor’s proposed $2,000 raise (3.7% on average) for teachers for the first year of the budget outside of the base SEEK guarantee. 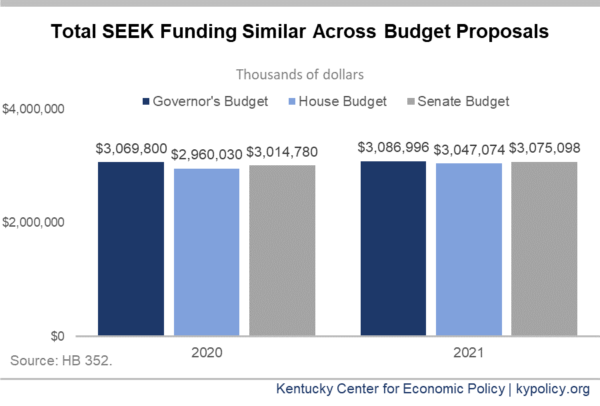 Like the House budget, the Senate budget does not increase funding for student transportation, which remains at approximately two-thirds of the statutorily required amount. In all versions of the budget, per-pupil funding for SEEK will continue to erode with inflation. Kentucky is already 4th-worst among states for per-pupil cuts in core funding since 2008.

The Senate budget makes other changes to education spending compared to what the House proposed:

As proposed by both the governor and the House budget, some of the additional funding for P-12 education comes from $85 million in SEEK funds originally budgeted in the current year but now expected to go unspent.

The plan provides an amount for universities and community colleges slightly below the House’s proposed increase, as shown in the graph below. The budget allocates $90 million of that money over the biennium to be distributed based on the performance funding formula (compared to $64 million in the House) that includes moving 2% of each institution’s base funding to the performance fund. That system, as we have noted, is disadvantaging universities and community colleges with more low-income students and students of color. The governor had proposed not using the model in his budget. Another difference is that unlike the House and governor’s budget proposals, in the Senate version none of the dollars are specifically designated to help with pension payments. 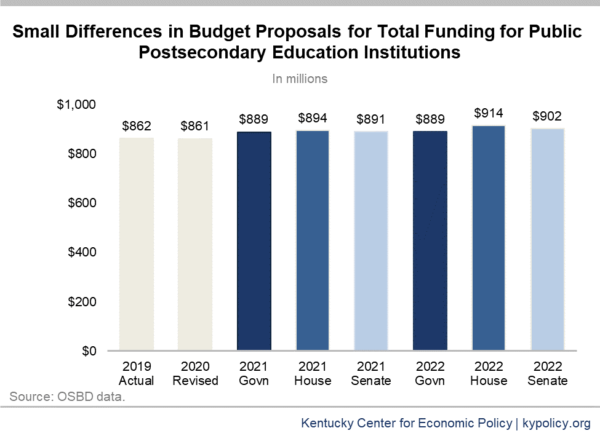 Funding for need-based college scholarships is very similar to what the House budget and the governor’s budget proposed. The Senate budget provides 87% and 86% of the statutory funding requirement for need-based aid in 2021 and 2022 respectively.

Total public health funding is reduced substantially in the Senate budget compared to the House budget despite the COVID-19 pandemic, which will require substantial health department resources. Public health funding is down from $102 million each year to $78 million each year, due to a reduction in state assistance to help local health departments in making significantly increased pension contributions.

Like the House, the Senate budget provides for 100 new social workers across the biennium to deal with the crisis in child protective services, significantly fewer than the 350 proposed by the governor. The Senate increases the pay for current social workers by 2% and social worker supervisors by 4% (the House proposed a 10% pay increase for new social workers, a 5% raise for existing social workers and an additional $960 in retention pay each year). Like the House, the Senate provides 200 new Michelle P waiver slots and 50 new Supports for Community Living waiver slots that provide community-based care for individuals with disabilities. This allocation is also significantly fewer than the 500 Michelle P slots and 100 Supports for Community Living in the governor’s budget, and there are over 9,000 people on those waiting lists.

The Senate, like the House, does not provide $34 million a year in General Fund dollars to support Kentucky Wired, as the governor had provided, leaving it to rely only on restricted funds. Like the House, the Senate sends a majority of coal severance monies back to coal counties, rather than the 50% required by statute, but takes $2 million off the top each year before the distributions to pay for mine inspectors. The Senate included cuts made by the House of $2.5 million a year in operating aid to local libraries.

The Senate Budget adds $222 million to the Rainy Day Fund compared to $89 million in the House and $10 million in the governor’s budget. The proposed Senate increase would bring the fund up to $525.4 million, or 4.6% of revenue based on the current forecast (which is now inaccurate due to the economic harm from COVID-19). The median state rainy day fund across the country was at 11.1% as of 2018.

The Senate budget includes a very small amount of new revenue from a weakened version of HB 32. After amendments made by the Senate, HB 32 primarily taxes vaping and is estimated to raise $9 million in 2021 and $16 million in 2022 compared to $23 million and $27 million in the House version, which also increased the tax imposed against other tobacco products commensurate to the tax increase on cigarettes imposed in 2018. The Senate budget  requires that some funds appropriated, including a portion of the base SEEK appropriation for schools, be held in reserve, and not distributed contingent upon the revenues the state receives meeting the official forecast.

The Senate proposal also includes $235 million in executive branch fund transfers over the biennium compared to $250 million in the House plan and $276 million in the governor’s budget. The biggest source is the Petroleum Storage Tank Fund, from which it transfers $43 million.