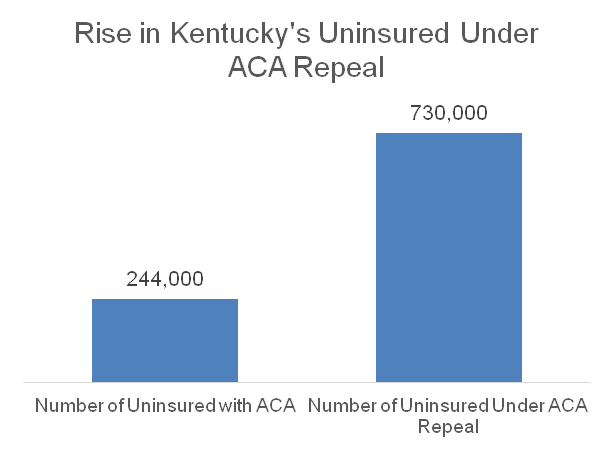 An estimated 486,000 Kentuckians would lose insurance coverage under a partial repeal of the Affordable Care Act (ACA), a tripling of the number of uninsured in the state, according to a new report from the Urban Institute. This decline would come from people losing Medicaid coverage, federal insurance marketplace (formerly Kynect) subsidies, the individual mandate and the individual insurance policy market.

The losses of coverage in Kentucky would be the third highest of any state.

The congressional plan to repeal the ACA, while delaying full implementation for two years, would have both immediate and long-term effects on both the portion of Kentuckians with insurance coverage and the billions in federal spending in Kentucky. Because the repeal would disproportionately harm states that expanded Medicaid and saw large decreases in their uninsured, Kentucky is among the states with the most to lose.

These same plans to repeal would also result in a huge decline in 2019 federal spending in the Commonwealth on Medicaid expansion and individual insurance policy subsidies. Between 2019 and 2028 that drop in federal spending totals $49.7 billion. This federal spending in the state has resulted in large employment gains in the healthcare sector and steep declines in the amount of money healthcare providers must spend on uninsured patients, called charity or uncompensated care. Nationally, the Urban Institute expects there to be a $1.1 trillion increase in demand for uncompensated care between 2019 and 2028 if repeal moves forward.

Very low-income people whose incomes are below the poverty line and middle-class people with incomes over 4 times the poverty line comprise 48 percent of those who would lose healthcare coverage. Very low-income people will lose coverage as Medicaid expansion is no longer made available and middle income people will lose coverage as the non-subsidized individual insurance policy market succumbs to what is called the “death spiral,” and companies no longer provide such policies. What’s more, the report estimates that individuals in working families will be hardest hit; 66 percent of all people losing coverage will have at least one full-time worker in their family.

The Affordable Care Act has been a lifeline to Kentuckians who either gained healthcare coverage through the Medicaid expansion and insurance subsidies, or have been protected from harmful practices which were banned because of the protections in the law. Even a partial repeal of the ACA would be harmful to Kentucky due to coverage losses and fewer health care dollars in the economy. Before any action is taken to strip the healthcare coverage of millions, the harm it would cause must be fully taken into account.