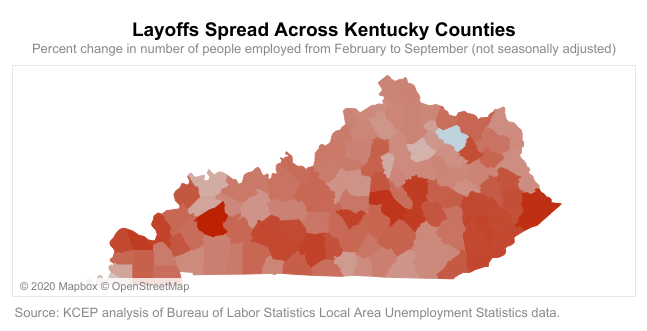 Amidst a new surge of COVID-19 cases, recent data shows that employment in virtually all Kentucky counties remained severely depressed in September. When looking at the economic recovery by income levels, the picture is worse for low-income workers, whose recovery stalled out months ago, and for whom jobs remain scarce. All of this points to the need for significantly more federal aid to help jumpstart the recovery and alleviate significant hardship.

Last week’s statewide data that showed the recovery may have weakened in September, with 41,523 fewer Kentuckians employed that month compared to August. Employment declines compared to February are as much as 15.7% in Kentucky counties, and a quarter of counties are still missing 10% or more of pre-coronavirus employment. The five counties with highest rate of job loss compared to February are from all across the state and are both rural and suburban:

While the counties with the lowest employment relative to February were spread across the state, rural counties in the southeast and west generally had a higher percent of employment loss than those in central and northern Kentucky. This pattern is in contrast to early in the downturn when many urban areas were among those with the largest employment losses, in part due to large job losses in industries like arts, entertainment and recreation as well as accommodation and food services that have since partially recovered.

Low-wage jobs are still far below pre-pandemic levels, but high-wage work has recovered

According to a daily employment tracker, as of the beginning of September, Kentucky workers in the top quartile for income (those with incomes approximately $60,000 and higher) have returned to pre-pandemic employment levels, with 0.5% more jobs than before the pandemic. For all other income categories, employment remains well below pre-pandemic levels, with jobs in the bottom quartile for income (those with incomes less than $27,000) 13.5% below the level in January.

Low-income households don’t typically have as much savings or other forms of wealth to fall back on during economic downturns. This is especially true for Black households, who have also been disproportionately laid off and have been hired back more slowly on average in Kentucky. This level of joblessness among low- and middle-income Kentucky workers has contributed to 32% of Kentucky adults in September reporting difficulty covering usual household expenses like food, rent or mortgage, car payments, medical expenses and student loans, according to Census data.

With many low and middle-wage workers continuing to be out of work, the need for more federal aid is urgent. The only round of stimulus checks is now months behind us, the $600 weekly unemployment enhancement expired back in July, the $400 weekly unemployment enhancement it replaced expired mid-September and the Pandemic Unemployment Assistance program (PUA) is about to leave many unemployed Kentuckians stranded when it ends in December. Additionally, as people begin to tighten their belts due to lost assistance, state revenues will dry up, further exacerbating the problem with layoffs in state and local governments.

An already painful situation will only become worse unless Congress acts quickly to provide aid to individuals through measures like enhanced unemployment benefits and food and housing assistance, as well as to state and local governments to prevent the double-hit of layoffs and fewer services at a time when they are needed the most.