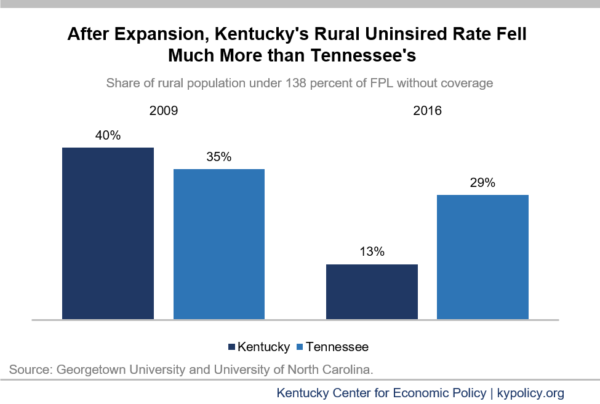 Kentuckians in the state’s rural areas experience many barriers to prosperity, but thanks to the Medicaid expansion, barriers to health have been dramatically reduced. A new report from Georgetown University and the University of North Carolina shows that Kentucky was among the top three states in the nation for bringing down the uninsured rate for those who live in rural areas and small towns with income under 138 percent of the federal poverty level – from 40 percent in 2008-09 to just 13 percent in 2015-16. 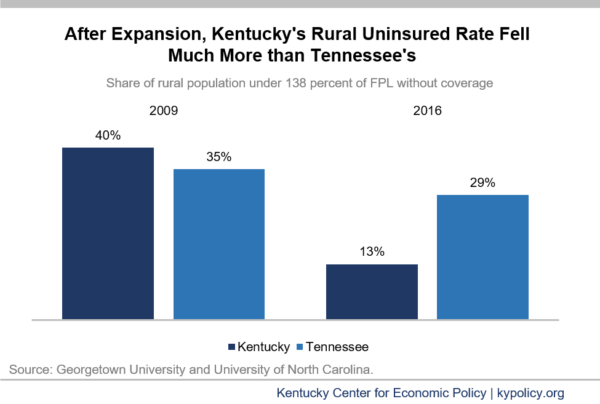 Not only has expansion boosted access to care in rural Kentucky and other states, but according to the report, states that expanded Medicaid also largely eliminated the coverage gap between non-metro and metro areas. Kentucky’s uninsured rate for those under 138 percent of FPL is now 13 percent in both metro and non-metro areas. A lack of employment opportunities and lower household incomes in rural compared to metro areas helps explain why Medicaid is especially important in removing barriers to health in a very rural state like Kentucky.

By providing residents in our small towns and rural communities with health coverage, Medicaid ensures rural hospitals, doctors’ offices and dentists have a reliable stream of revenue for treating people when they get sick. This allows them to keep their doors open and to address health problems in areas where health care provider shortages have been all too common. But critical advances in rural Kentuckians’ health care coverage and treatment, as well as the stability of local health systems and economies, are at risk if Kentucky moves forward with proposed barriers to coverage.