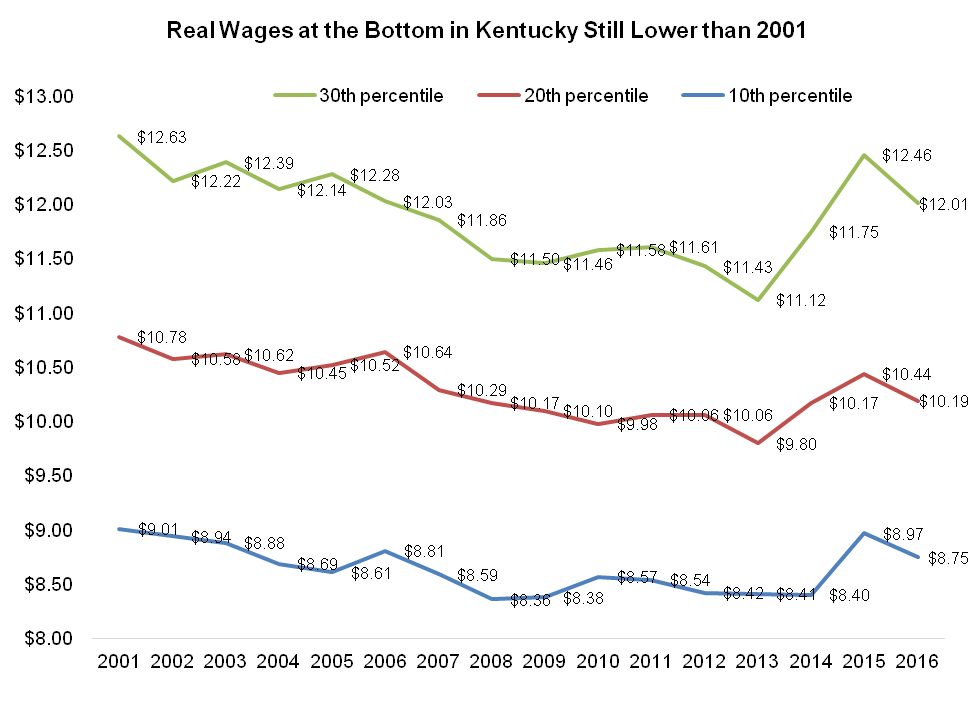 Following meaningful wage growth in 2015, real wages dropped slightly for Kentucky workers in 2016 and are still below where they were back in 2001. With wages low for a broad swath of the workforce, the state needs policies that would lift earnings in order to boost local economies and ensure more families can make ends meet.

As the graph above shows, real (inflation-adjusted) wages had been declining ever since 2001 until a sharp increase occurred in 2015 as the labor market tightened in the economic recovery. Wages then fell slightly in 2016. For all 3 points identified, real wages are lower than they were 15 years earlier.

These wage levels are also far below what families need to pay living expenses. A family of 3 in rural Kentucky with one earner needs about $24 an hour in full-time, year-round work to meet a basic family budget.

Key policies that would lift wages for workers at the bottom include an increase in the minimum wage. Kentucky’s minimum is still stuck at $7.25 an hour (and for tipped workers, only $2.13 an hour) even though 29 states and D.C. have raised theirs, with many set to rise to between $10 and $15 an hour. An expanded Earned Income Tax Credit (EITC) would also increase take-home pay, and Kentucky is one of the states without one. And while the federal overtime rule change is held up in court, Kentucky could proceed in making sure more workers get paid time and a half for weekly hours over 40.

Wage growth would also accelerate if the U. S. economy were back to full employment, which it hasn’t reached since the late 1990s and early 2000s. We could get there through expanded investment in needs like infrastructure and targeted job creation in distressed communities. Also important are policies that protect workers’ rights to bargain for wages, but the state’s recently-passed Right to Work law will weaken their ability to do so and is associated with lower wages.