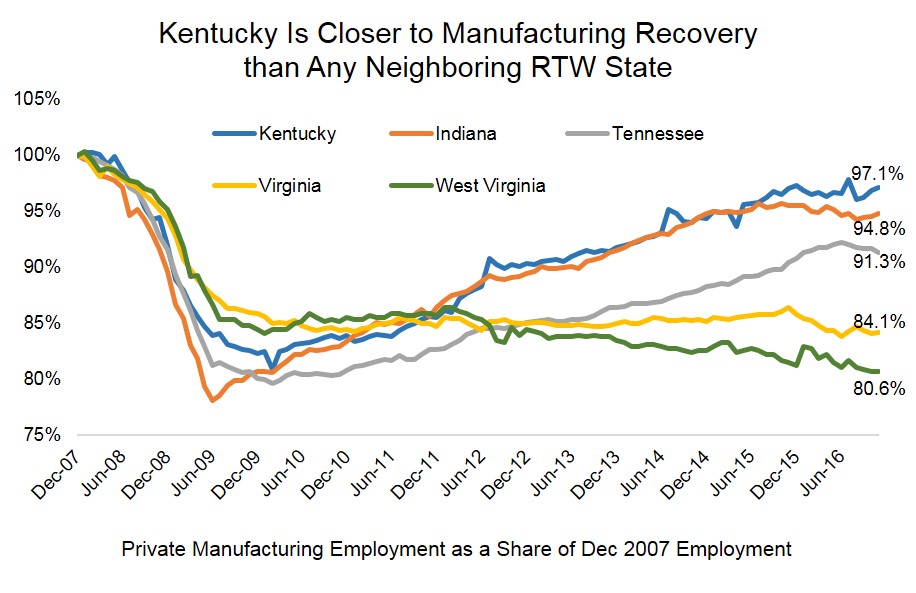 Proponents of Right-to-Work (RTW) argue that Kentucky would attract more jobs if such a law was in place, especially in manufacturing. But the evidence does not show our RTW neighbors have grown jobs more successfully than Kentucky in recent years, and academic research on the subject also doesn’t find a link between RTW and job growth.

Looking at statewide manufacturing job growth in Kentucky and our RTW neighbors, all are still below December 2007 employment levels before the Great Recession hit, but Kentucky is the closest to regaining the jobs that were lost. 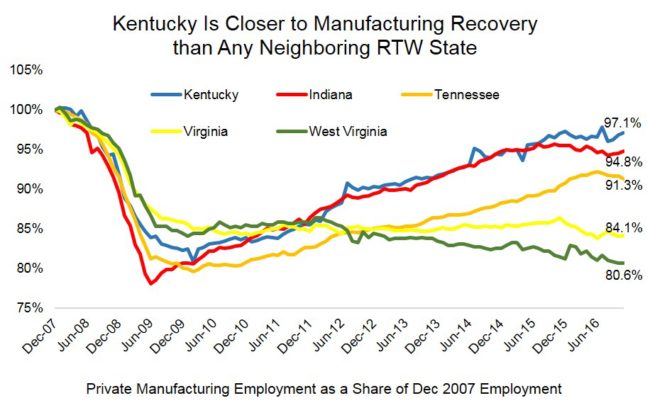 At the local level, data from the Quarterly Census of Employment and Wages (QCEW) allows comparisons of the manufacturing sector in counties on either side of the Ohio River in the Louisville Metropolitan Statistical Area (MSA). Since Indiana went RTW in February 2012, manufacturing has fared better on the Kentucky side of the MSA than on the Indiana side. 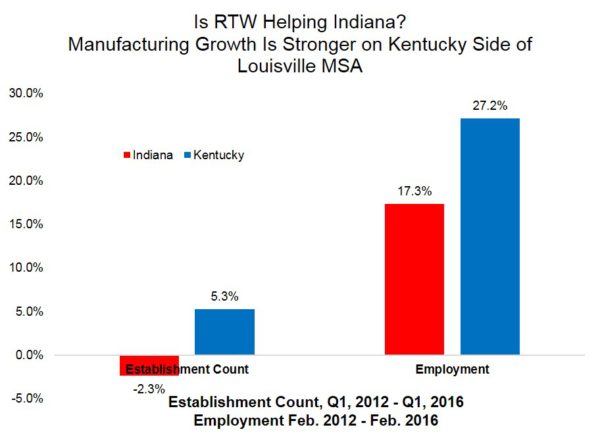 More importantly, when researchers control for other factors they have found no evidence of an impact from RTW on job growth, as in a careful analysis of Oklahoma. A study by the Center for Business and Economic Research at the University of Kentucky also found no discernible positive impact from RTW on states’ economic growth.

While research hasn’t found a link between RTW and job growth, RTW is associated with lower wages. Controlling for other factors, workers in RTW states make 3.1 percent, or about $1,558 less a year (in 2015 dollars). Wage erosion harms workers, their families and our economy negatively, including by reducing demand for the kinds of goods manufacturers produce. Low and stagnant wages are already a central problem facing the economy, and we don’t need to make it worse.

Kentucky is wiser to focus on economic development strategies that improve our workforce skills, infrastructure and quality of life rather than approaches that reduce wages while failing to deliver the jobs that are promised.