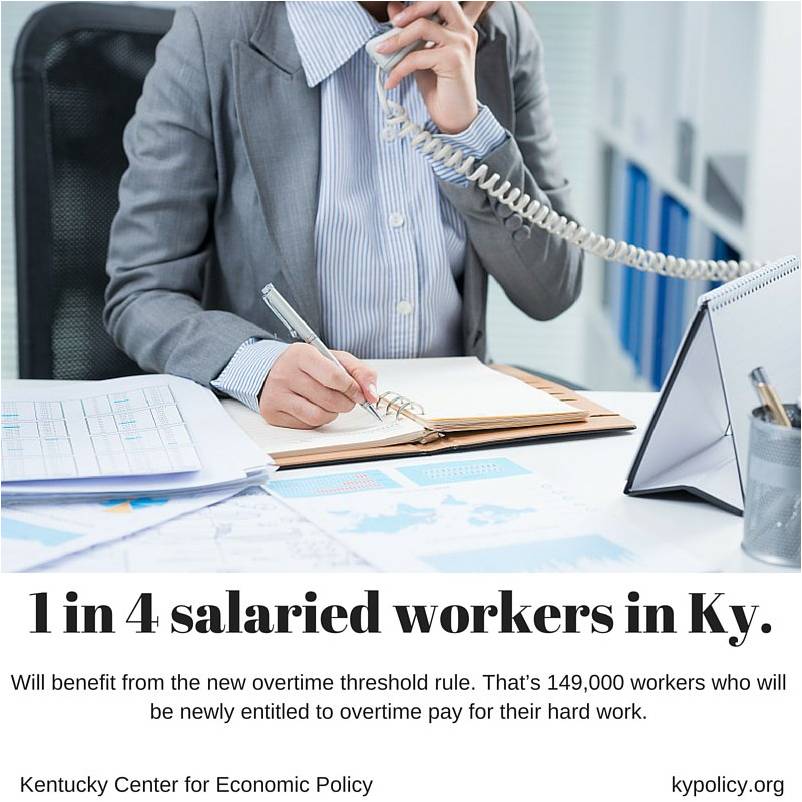 An estimated 149,000 salaried Kentucky workers will become entitled to overtime protections under President Obama’s increase to the overtime salary threshold announced today, according to an analysis from the Economic Policy Institute (EPI). Over the years, this threshold has eroded, and the change will mean protections from unpaid hours for many low salary workers, an increase in jobs as employers must rely less on unpaid labor and salary boosts for some workers.

Forty years ago, 60 percent of salaried workers were protected by the overtime rule, but failure to update the threshold means that now only 8 percent receive protections. Until today’s change, an employee making only $23,660 a year could be classified as an executive, administrator or professional staff person and be denied overtime even though their salary falls under the federal poverty line for a family of four.

A part of the Fair Labor Standards Act, the overtime threshold is meant to provide workers protections against being paid too little for too much work. President Obama’s rule change raises it to $47,476, impacting an estimated 12.5 million salaried workers nationwide who fall between the previous and new threshold.

EPI breaks down those who would benefit by state and also by demographics: women make up slightly more than half of all workers directly impacted. Because they also make up a disproportional share of the low-wage salaried workforce nationwide, young, less-educated, black and Hispanic workers would especially benefit.

More than a third of those who would become entitled to overtime pay under the increase are parents, bringing up the total number of kids covered by the threshold from 3 to 10.3 million nationwide. More parents who work long hours will be compensated fairly for that work, which is also good for the economy since families are likely to spend every new dollar earned meeting basic needs and increasing their quality of life.

In the case that employers decide to hire new employees instead of demanding and paying for overtime from existing employees, more jobs will be created. Also, some workers who make close to the new threshold will likely receive a pay increase as employers seek to avoid paying overtime workers are newly eligible to receive.

By industry, workers in agriculture, leisure and hospitality and other services, construction and public administration would especially benefit from the new threshold. The 149,000 Kentucky workers who will become entitled to overtime comprise 25.1 percent of the state’s total salaried workforce – a full fourth of that group. Nationally, 23.3 percent of the salaried workforce will be newly entitled to time-and-a-half pay.