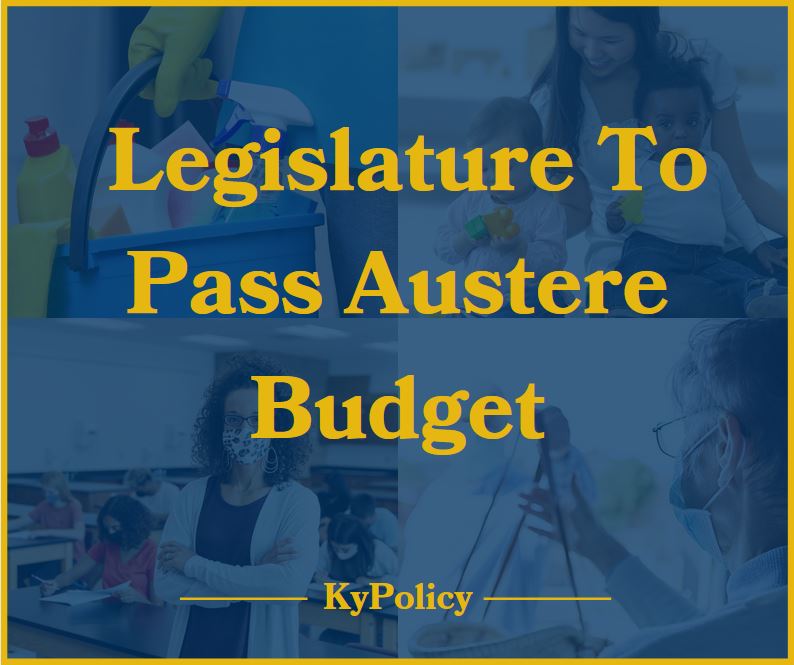 The legislature is set to pass an austere budget that does not include the employee raises, targeted budget increases and one-time investments the governor had proposed using surplus monies available in large part due to prior federal aid. Instead, the budget makes an excessive additional deposit in the state’s rainy day fund. In addition, the budget prevents the governor from using the substantial new federal funds from the just-passed American Rescue Plan without authorization from the General Assembly.

The key part of the budget regards the use of the large federal funds under the American Rescue Plan Act (ARPA). The legislature inserted language prohibiting the governor from using those funds, meaning they will either need to pass additional budget legislation in the remaining days of this session or the governor will have to call them back into a special session:

Such language was not included when the state passed its budget last year regarding the use of federal CARES Act Coronavirus Relief Fund monies, even though the CARES Act had passed prior to the budget being enacted. Governor Beshear used those CARES Act monies throughout the summer and fall to fight the pandemic, shore up the state budget and provide direct relief.

The state is set to receive $2.4 billion from the Coronavirus State and Local Fiscal Recovery Fund in the ARPA, and the monies must be spent by Dec. 31, 2024. These funds can be used in the following four ways:

These aid dollars cannot be deposited in state pension funds. And they cannot be used either directly or indirectly for tax cuts. Doing so will force a state to pay an equivalent amount of aid back to the federal government.

Kentucky will receive $185 million from the Capital Projects Fund that this language also bars the governor from using without authorization. Those monies can be used to “directly enable work, education, and health monitoring” related to the public health emergency. Examples include projects that support telehealth and remote work.

Budget removes many funding increases proposed by the governor

In P-12 education, the General Assembly’s budget freezes the per pupil guarantee under the Support Education Excellence in Kentucky (SEEK) funding formula at its current level of $4,000 per student compared to $4,040 per student in the governor’s plan. Combined with monies removed for raises as described below, that’s $139 million less to SEEK than the amount the governor had proposed.

Also removed is all funding for textbooks ($11 million), $5 million of the $89 million the governor proposed for preschool (which was for disadvantaged areas), and $2.1 million for the Teacher Loan Forgiveness program. The budget also does not include the proposed $100 million for school construction that had been included in the governor’s budget, and it contains no change in the funding for kindergarten. P-12 education will, however, receive significant direct federal funds both from the relief package that passed in December as well as the ARPA.

The budget includes a 2% increase in funding to higher education institutions, also proposed by the governor. The legislature puts all that money in the performance funding pool in which institutions compete against each other for the dollars, whereas the governor had put half of the money in that pool and half directly to institutions. Higher education was flat-funded last year, and came into this budget being funded nearly 35% below 2008 levels once inflation is taken into account.

The legislature’s budget eliminates $7 million proposed by the governor to hire 76 new social workers to address the crisis in child welfare. Kentucky ranks first in the nation in its rate of abused and neglected children, conditions that have been made worse during COVID-19. Additional social workers had been included in the last budget, but were taken out when the legislature passed a continuation budget last spring. The budget also removes $3.4 million for 250 Michelle P waiver slots and 50 Supports for Community Living (SCL) slots (both for people with disabilities) proposed by the governor. There were 7,400 people waiting for Michelle P slots and 2,785 for SCL slots as of February. And the budget removes $1 million for a Medicaid COVID-19 enrollment initiative for underrepresented populations, as well as $12 million that had been provided for local health departments in recognition of historic state underinvestment.

The budget includes the amounts needed to overhaul Kentucky’s severely outdated unemployment insurance system (a portion of which is from funds previously allocated), using General Fund monies rather than bond funds. The limitations of the current 50-year-old computer system and 20-year-old website are a primary cause of the delays in processing unemployment benefits during this crisis. The proposal uses federal funds rather than the General Fund to provide the proposed $1.1 million this year and $8.4 million in the new budget to restore 90 staff to help with unemployment and other services at local career centers.

Like the governor’s proposal, the budget fully funds the actuarially determined employer contribution (ADEC) to Kentucky Retirement Systems for state employees using the new fixed allocation method included in House Bill 8. For quasi-governmental organizations, it provides the contribution of the ADEC on behalf of health departments, community mental health centers and universities and community colleges, and the contributions automatically decline dramatically for certain agencies like domestic violence centers under the fixed allocation method.

The budget fully funds the ADEC for the Teachers’ Retirement System pension costs, but removes the $73 million state subsidy for retiree health insurance for under-65 retired teachers.

The General Assembly’s budget does not include the governor’s proposed $220 million in grants for small businesses of up to $20,000 and nonprofits of up to $10,000 (which had been filed as separate legislation). Instead, the legislature has passed a tax break in House Bill 278 at a similar estimated cost of up to $250 million. But while the governor’s proposal was targeted to small businesses in the hardest-hit industries like restaurants that have evidence of revenue loss, HB 278 is not targeted to industries most harmed and will only benefit businesses that are profitable, as we describe here. Also a tax cut as in HB 278, as opposed to direct payments, may very well run afoul of the rule under the ARPA that federal funds cannot be used directly or indirectly to pay for tax cuts.

Also missing from the General Assembly’s budget that was included in the governor’s plan:

Instead of using the monies to give raises, restore funding in targeted areas, fund one-time investments and provide relief, the General Assembly’s budget puts the money aside in the Budget Reserve Trust Fund (often called the rainy day fund). The budget will make a deposit of $134 million into the rainy day fund this year and another $609 million next year, for a total of $743 million. The governor had proposed $100 million.

On top of the $466 million already in the rainy day fund, that will bring its balance to $1.209 billion, by far the largest amount ever. That amount should grow more this summer as the state is on track for a revenue surplus this year. The state would be putting a tremendous amount of money away during a historic pandemic when hardship is at a record high and needs for families and communities are unprecedented across the commonwealth.