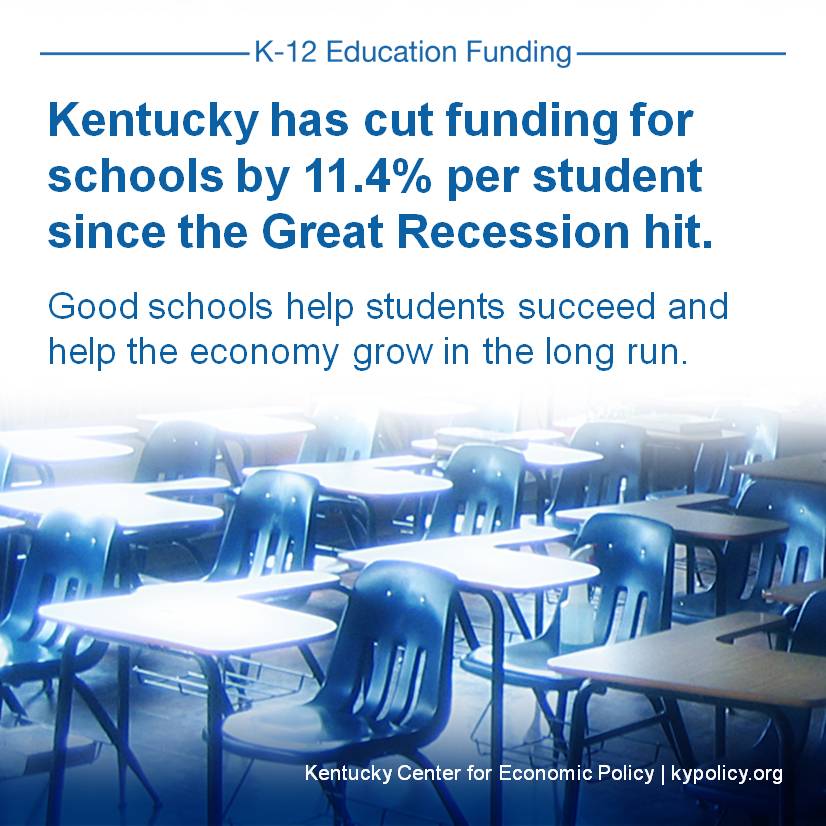 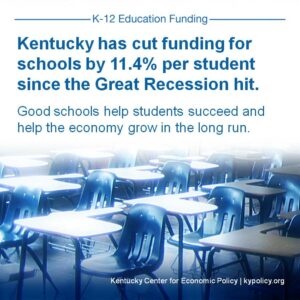 Kentucky ranks 11th worst among 47 states in the depth of cuts to school funding since the start of the recession, according to a new report released today by the Center on Budget and Policy Priorities, a non-partisan policy research organization based in Washington, D.C. Kentucky has cut per-student investment in K-12 schools by 11.4 percent between 2008 and 2015 once inflation is taken into account.

Although the state budget that passed earlier this year included some more money into the SEEK funding formula for K-12 schools, the additional resources translate to just a $37 increase per student in 2015. That allows school systems to tread water but not make up ground lost in the recession, and puts Kentucky far behind most other states when it comes to reinvesting in education.

“A well-educated workforce is critical to economic growth in Kentucky,” said Ashley Spalding, Research and Policy Associate at the Kentucky Center for Economic Policy. “We need greater investment in schools to support the state’s economic growth and ensure that our children receive the education they need to succeed in life.”

The report compares funding levels between states in their core funding formula for local schools, which in Kentucky is known as SEEK. State funding through SEEK has been relatively flat since 2008, but this translates into cuts once inflation is taken into account. Kentucky’s spending per student is $561 below pre-recession levels after accounting for inflation.

Lack of adequate investment in schools has long-term economic consequences. Quality elementary, middle, and high school education provides a crucial foundation that allows children to go on to succeed in college and in the workplace.

Budget cuts are being felt especially hard in the state’s poorer school districts, which find it more difficult to make up for funding losses with local sources. That’s leading to growing inequality between rich and poor districts in Kentucky. As the report shows, the lack of state funding is made worse by the cuts in federal funding; since 2010, federal spending for Title 1 (the main assistance program for high-poverty schools) is down 10 percent after adjusting for inflation and funding for special education is down eight percent.

“At a time when the nation is trying to produce workers with the skills to master new technologies and adapt to the complexities of a global economy, states should be investing more — not less — to ensure our kids get a strong education,” said Michael Leachman, director of state fiscal research at the Center on Budget and Policy Priorities and co-author of the report released today.

The Center’s full report can be found at: http://www.cbpp.org/cms/index.cfm?fa=view&id=4213.