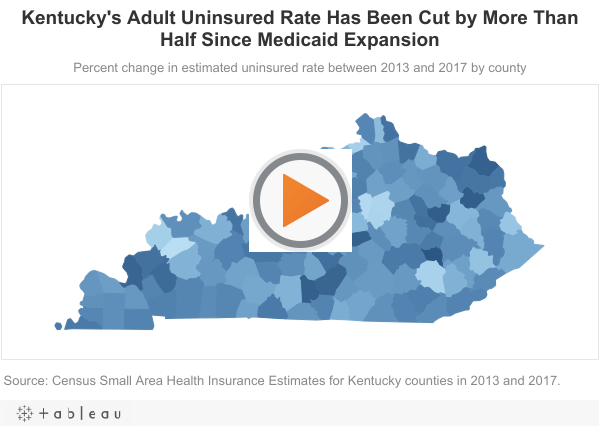 New Small Area Health Insurance Estimates (SAHIE) were released by the Census this month for 2017, showing a continued increase in health coverage among adults under age 65 since Kentucky expanded Medicaid. While there was a statistically insignificant uptick in the share of Kentuckians without insurance from 2016, the state-wide rate of uninsured was still low: 5.4 percent compared to 14.3 percent in 2013.

Those coverage gains have been in every county in the commonwealth, as shown in the map below. The largest decrease in the share of adults without insurance occurred in Owsley County, with a 70 percent drop. The county with the lowest share of uninsured residents was Oldham, at 3.8 percent, whereas Todd County had the highest share at 8.9 percent.

These gains in health coverage have had a profound effect on the commonwealth, with research already showing improvements in certain health outcomes, increased utilization of preventive health services, and broad economic benefits in local communities. Kentucky must keep supporting coverage programs like Medicaid to ensure these benefits continue to build a healthier and more prosperous Kentucky.