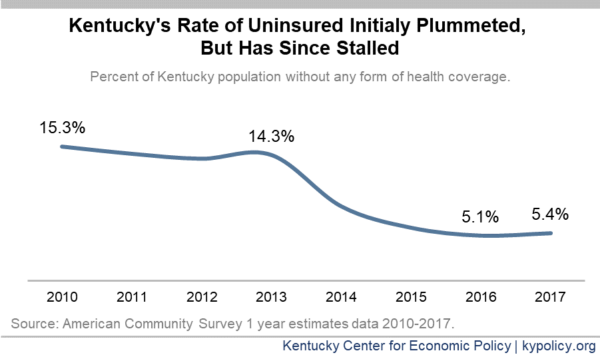 U.S. Census data released today shows Kentucky’s historic progress in reducing the share of Kentuckians without health insurance coverage stalled out in 2017, with a statistically insignificant increase in the uninsured population over the last year from 5.1 percent in 2016 to 5.4 percent in 2017. Kentucky was not the only state that backslid: across the nation on average, the uninsured rate went up by a statistically significant 0.2 percent.

Despite this setback, Kentucky’s health insurance coverage rate still reflects the huge success of the Medicaid expansion to ensure more Kentuckians can get to the doctor. The new American Community Survey data (ACS) show Kentucky has experienced a statistically significant 8.9 percentage point drop in the uninsured rate since Kentucky created Kynect and expanded Medicaid coverage under the Affordable Care Act in 2013 (when the uninsured rate was 14.3 percent). In fact, only three other states surpassed Kentucky’s percentage point decline in the uninsured rate,  and we continue to lead the nation for the percent decrease in the number of people without coverage (-62.2 percent).

“Medicaid expansion has been a game changer in the commonwealth. Because so many more Kentuckians now have coverage, people are getting healthier, hospitals are thriving and our economy is moving ahead,” Dustin Pugel, policy analyst for the Kentucky Center for Economic Policy, said.

Recent and pending changes at the state level and attempts to repeal and sabotage the ACA at the federal level threaten the important health coverage gains Kentucky has made.

Instead of moving backward on our health, we can pursue policy options to make coverage more affordable for more Kentuckians such as a Medicaid buy-in option on the exchange, and a reinsurance program, which would lower premiums for everyone on the exchange – especially for those who earn too much for premium assistance.

“Lawmakers should abandon efforts to roll-back our historic gains in coverage and health and instead look ahead to ways we can make Kentucky healthier and more prosperous,” Pugel said.