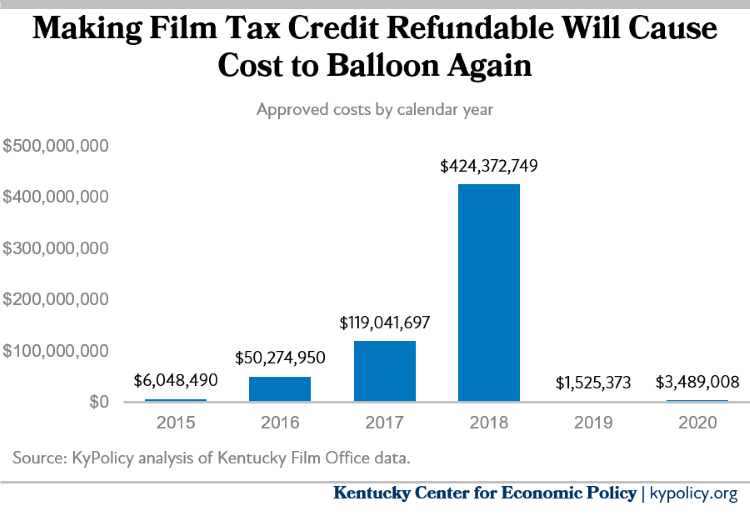 The Senate Appropriations and Revenue Committee made a last-minute change to House Bill 249 to bring back a bad idea — making Kentucky’s film industry tax credit refundable yet again. This change, which will be a $75 million annual hit to our budget (plus a federal penalty as described below), was never introduced separately as a piece of legislation or given a public hearing. There are good reasons it has been kept hidden: research shows film tax breaks are an ineffective and extraordinarily expensive giveaway, which is the reason Kentucky made its credit nonrefundable in the first place.

States have tried for years to lure movies and television productions to the state by providing tax credits for their production. But the research indicates these giveaways cost more than they return to states and drain dollars that would be better used for schools, health, infrastructure and other needs. As we wrote in 2015:

The ineffectiveness of film tax credits has led 13 states to eliminate them in the last 10 years. One recent study that looked at five states found that despite spending nearly $10 billion on them since 2002, the tax credits were associated with “no statistically significant effects” on jobs. Primary author Michael Thom said, “This new study should put to rest any notion that motion picture tax incentives may work in some states but not others. . . The states investing the most in incentives are not getting the return on investment taxpayers deserve, pure and simple.”

Making Kentucky’s credit refundable will cause costs to balloon again

Just a few short years ago, Kentucky’s film industry tax credit was on track to cost hundreds of millions of dollars, with over $400 million in credits approved in calendar year 2018 alone, as illustrated in the graph below.

The explosion in project approvals happened following a significant expansion of the program in 2015, when the amount that could be recovered increased and the required investment to qualify was reduced. This credit was also unusual because it was one of the very few in Kentucky that was refundable. A refundable credit is more like a grant than a credit, because if a person earning the credit doesn’t owe any taxes, the government cuts that person a check. This means that Kentucky tax dollars were used to pay out-of-state companies that came into Kentucky for a brief period of time to produce a film, and these companies were paid even though they did not create permanent jobs or make any long-term investments in the commonwealth. And in Kentucky, the program in effect gives companies grants for a whopping 30%–35% of their production costs.

In response to the alarming increase in project approvals, and because the program did not have a cap, the program was suspended as of February 1, 2018.  However, because companies were given a window in which they could still apply to take advantage of the huge subsidy, an extremely high number of projects were submitted in January 2018, and the state approved them, and we will be experiencing the impact of those approvals through 2022.  Following suspension of the program, the General Assembly reinstated the credit but made it nonrefundable, which means that it is now available only to entities that have a Kentucky tax liability. The General Assembly also removed the production of commercials as an eligible activity, and established an overall cap of $100 million.  Since the program was made nonrefundable, approved credits declined to only $1.5 million in calendar year 2019, and $3.5 million in calendar year 2020.

There’s an additional problem with expanding this expensive tax break this year. Under the provisions of the American Rescue Plan, states will have to repay portions of the federal aid they receive equal to the amount of tax cuts and tax breaks they enact between March 3, 2021, and Dec. 31, 2024. So Kentucky’s budget will get hit twice. We will lose $75 million a year from the film tax break, and also have to give back the same amount of aid to the federal government — aid the state desperately needs for our communities.

States are net losers when they use their tax codes for these types of incentives, with losses far outweighing benefits. Rather than diverting state resources to support a small group of mostly out-of-state interests, and paying a penalty to the federal government, the money should be used to invest in schools, infrastructure and healthcare. Those investments directly benefit Kentuckians and enhance economic development by helping to make Kentucky a place where people want to live and work.