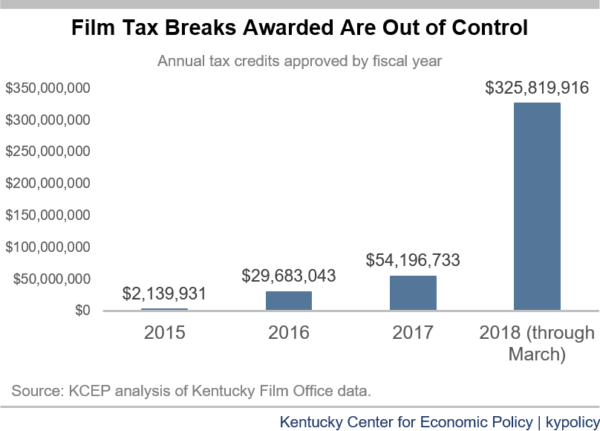 Since we last wrote in October 2017 about the proliferation of projects under the film industry tax credit, approvals have accelerated at an alarming rate and the cost of the program continues to escalate. Even though new applications were suspended as of February 1, 2018, approvals are still being made because the Kentucky Film Office is working its way through applications received right before the deadline. The office has approved 204 applications that were received in the month of January, many of which were submitted on the last two days before the suspension began.

As illustrated in the chart below, approvals for the 2018 fiscal year are at an astronomical $508 million. Because the program was suspended but companies were given a window in which they could still apply and take advantage of the huge subsidy, an extremely high number of projects were rushed to application and the state approved them. 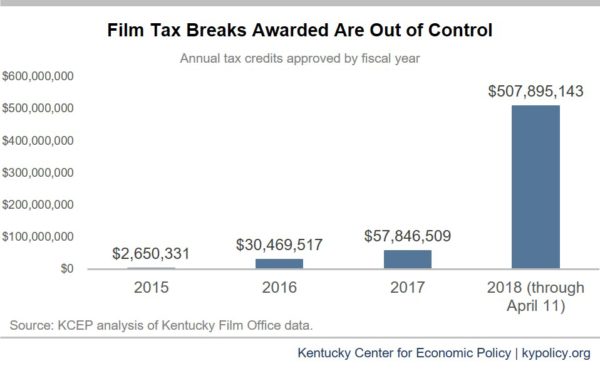 In his proposed budget, the Governor recommended that the program suspension be continued through the 2018-20 biennium. However the final version of HB 366 enacted by the General Assembly maintains the program with some changes that will reduce but not eliminate the overall fiscal impact. The tax breaks already awarded will be a drain on resources regardless of what happens moving forward.

The changes include imposing a cap of $100 million per year (the credit currently has no cap) and making the credit nontransferable and nonrefundable. These changes will make the credits less attractive to companies that do not have a Kentucky tax liability and will likely reduce the use of the program. However, continuation of this program in any form is concerning as research shows such programs to be of questionable value, costing much more than any benefits that result. In 2014 and 2015, we warned that film tax breaks were ineffective and expensive, but the state lifted the cap on costs and made the program more generous anyway.

Of additional concern is that the impact on the General Fund as these newly-awarded credits are claimed is not reflected in the revenue estimates used by the General Assembly in enacting the next biennial budget. This means that the revenue estimates used are likely overstated, further reducing the already limited resources available to fund our schools, human services and other important public services.

Updated to include projects approved at April 11, 2018 meeting.