College students on campuses across Kentucky are starting a new academic year amidst the state’s continued higher education affordability challenges. With the 2020-2022 budget process around the corner in January, it’s an important time to review the impact of state budget cuts to higher education over the past decade.

As shown in the graph below, the state has cut funding for our public universities and community colleges by 35% since 2008 in inflation-adjusted terms. 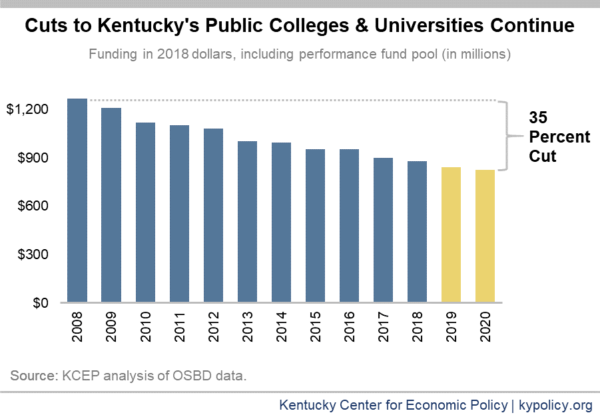 Over time as cuts have occurred and the state has shrunk its investment in higher education, students and their families are paying an increasing share of the costs of public higher education. 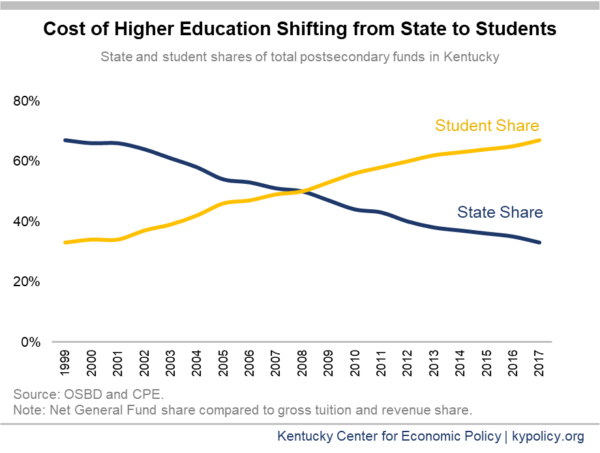 Tuition and mandatory fee increases between 2019 and 2020 were not huge, but at most institutions are higher than inflation, which was 1.8% over the last year:

Only Kentucky State University did not increase tuition and fees in 2020.

According to a report by the Center on Budget and Policy Priorities, Kentucky ranked 8th worst in the nation in college affordability last year, measured as average tuition and fees at a public 4-year university as a share of median income. And the cost of higher education as a share of income is especially high for black and Hispanic families. In 2017, the average tuition and fees at a public four-year university accounted for:

As tuition continues to increase while wages have not, student debt also continues to rise. The share of students graduating with debt from four-year universities in Kentucky (both private and public) has grown from 52% in 2004 to 64% in 2017, according to a presentation by the Council on Postsecondary Education. And the average amount of debt for these graduates has increased from $14,250 to $28,447.

Even the cost of attending a community college is out of reach for many Kentucky students, as shown in the graph below. It takes into consideration official (and typically modest) estimates of housing, food and other costs beyond tuition and fees — which are a struggle for many students across Kentucky campuses, including at community colleges. 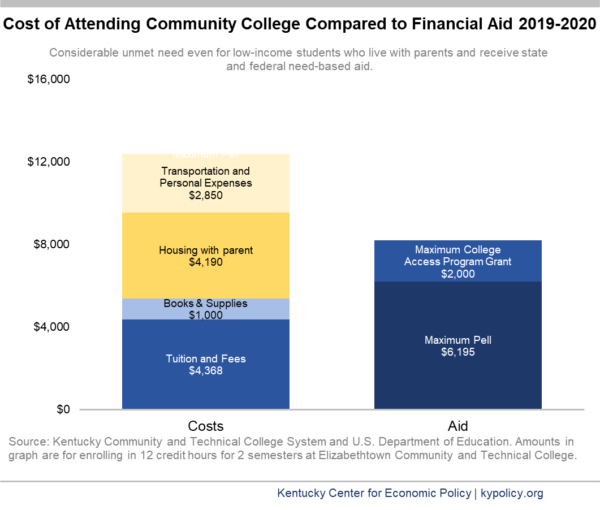 Investments in education — including higher education — are critical to the state’s economic future and also health. Kentucky is among the minority of states that have not reinvested in higher education in the aftermath of the Great Recession. Without more funds for Kentucky’s public universities and community colleges, college affordability problems will worsen, as well as equity and quality concerns. As part of these decisions, the state’s performance funding model needs to be revisited so that the inequities it creates and reinforces are addressed.