Though the details remain unknown, Governor Bevin has described the kind of tax reform he’ll introduce in a special session this year as shifting Kentucky toward a “consumption-based” tax system, or from income to sales taxes. As shown in multiple other states that have enacted such a shift, this approach would give more tax breaks to the wealthiest Kentuckians and leave the state with less revenue over time to invest in our commonwealth. 1 In contrast, HB 263, filed in Kentucky’s 2017 General Assembly by Rep. Jim Wayne with 12 co-sponsors, is an example of comprehensive tax reform that would address inequities in our tax system and strengthen our ability to make the investments that build thriving communities. 2

The bill draws from the best elements of Kentucky’s 2012 Blue Ribbon Commission on Tax Reform along with other needed changes to make the state’s tax system more adequate, fair and reliable. According to the Legislative Research Commission’s fiscal note, HB 263 would raise $579 million annually at full implementation. 3 It would clean up tax breaks for powerful interests and help address the upside-down nature of Kentucky’s tax system, which asks the least of those with the most as a share of income. It would also result in revenue better keeping up with growth in the economy, improving Kentucky’s ability to sustain investments in our schools, health, infrastructure and more while paying down our liabilities.

Shifting from income taxes to greater reliance on sales taxes would be a huge tax cut for the wealthy; and Kentucky already spends billions of dollars on income tax breaks that primarily benefit those with the greatest ability to pay taxes. 4 Reducing those breaks, as HB 263 proposes, would generate more revenue for the investments that benefit all Kentuckians. Related to the individual income tax, the bill would:

The bill would raise $25 million by reinstating the estate tax on wealthy Kentuckians as it existed before federal tax changes in 2003 eliminated it. 6 Only very few, very wealthy estates pay the tax.

At the corporate level, HB 263 would:

Ending these individual and corporate income tax breaks would help address the core problem with Kentucky’s tax system: revenue growth is not keeping up with the economy, making it impossible to sustain investments over time. Because consumption does not grow as quickly as income in our economy – and because such a large share of the gains from economic growth are going to those at the very top – shifting from income taxes to sales taxes (from the wealthy to everyone else) would worsen this flaw.

Other elements in HB 236 would also help restore the relationship between our economy and revenue system by:

Additionally, the bill would help offset the high public cost of tobacco use by increasing taxes on cigarettes and other tobacco products, including e-cigarettes. Though tobacco taxes are not a reliable revenue source over time, this measure would generate $155 million initially and would provide important benefits by serving as a disincentive to tobacco use.

Because Kentucky’s income taxes are mostly progressive and sales taxes are regressive, an income-to-sales tax shift would worsen the imbalance in Kentucky’s existing tax system (see below). In other words, such a shift would make our system even more upside-down than it already is, asking less of the wealthiest Kentuckians and more of lower income families. 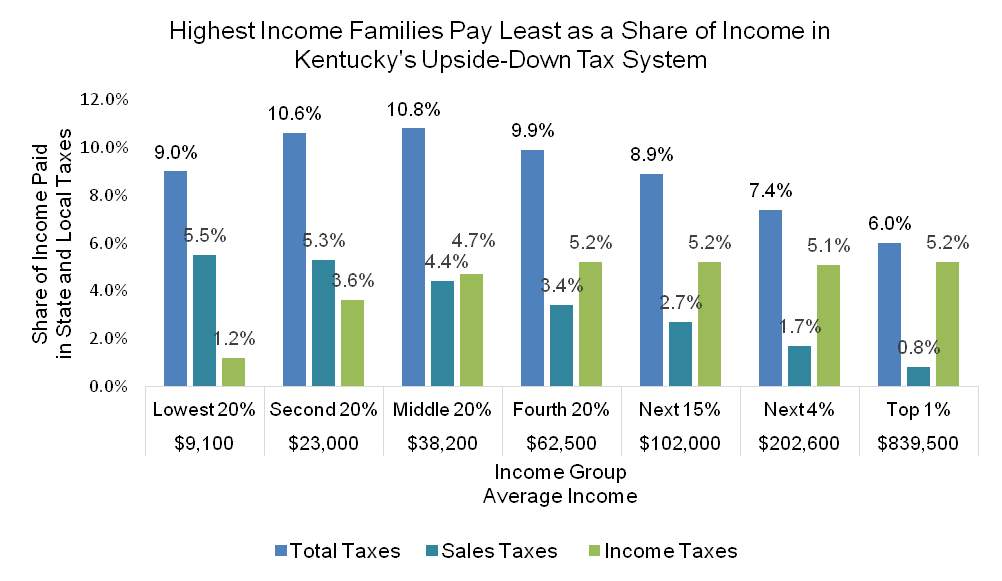 In contrast, HB 263 would ask more of those at the top and less of low- and middle-income people who currently pay a larger share of their income in taxes. To further help with inequities, the bill would create a state level Earned Income Tax Credit (EITC) – an effective poverty-fighting tool that supports work and helps families afford basic living expenses, pay off debt and invest in education. At 15 percent of the federal EITC, this refundable credit would cost $115 million a year. 10

Combining the distributional impact of HB 263’s individual income tax changes including the EITC; the expansion of the sales tax base to luxury services; and gas tax, cigarette and “other tobacco products” tax increases shows that HB 263 would make our tax system less upside-down overall even as it generates more revenue for investments that benefit all Kentuckians. 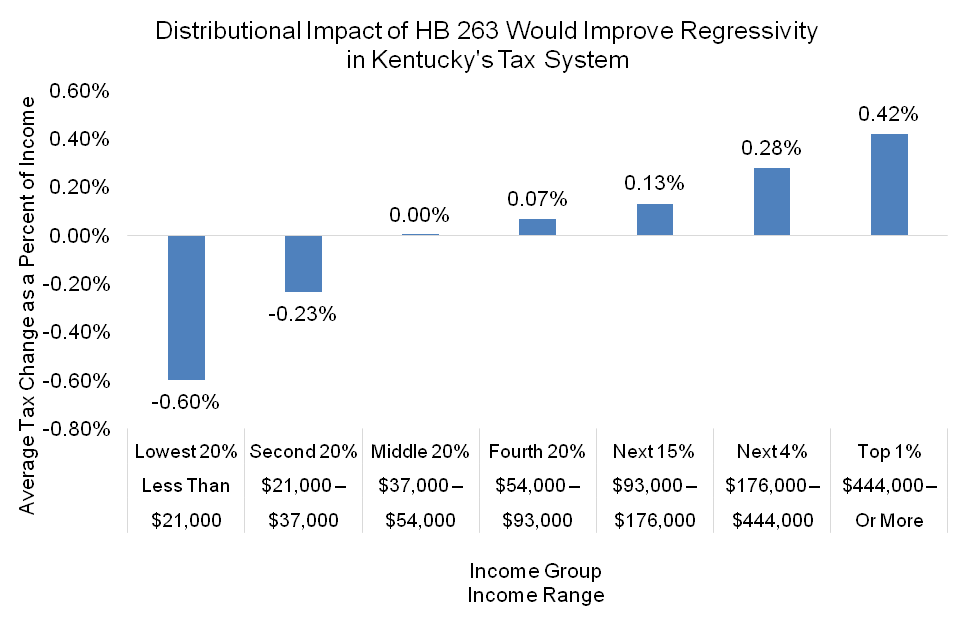 As legislators consider what kind of tax changes deserve to be called “tax reform,” and what kind of tax reform warrants a special session, HB 263 provides a good example of the kind of sound approach that is needed: one that cleans up tax breaks and generates revenue for stronger investments in our commonwealth. It also provides a clear benchmark against which harmful tax-shift proposals should be measured.