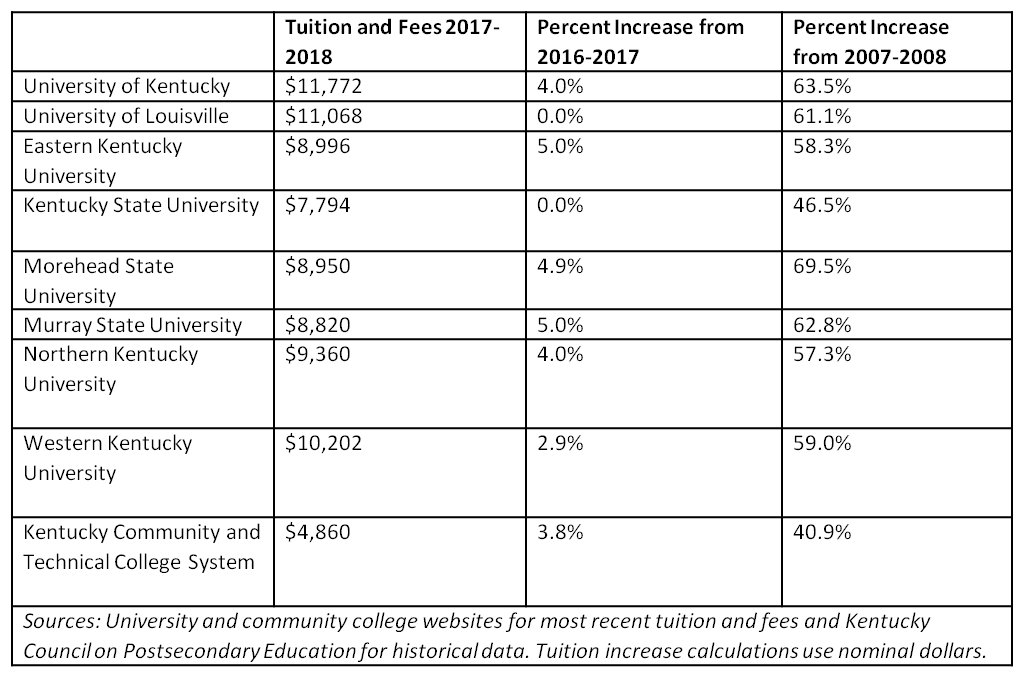 In colleges across Kentucky, students are beginning their fall semester — some for the first time, some returning to complete a degree. Here are five things about higher education in our state to keep in mind as the new school year begins.

Kentucky ranks in the bottom 10 states in the nation for per-student higher education funding cuts since 2008, according to a recently released report. We are also 1 of 13 states that continued to cut over the past school year, while the majority have begun to reinvest. These cuts have caused harm in our state’s public higher education institutions — including faculty and staff layoffs, hiring freezes, some degree and program eliminations and scaled back student services. State budget cuts have also contributed to significant tuition increases that further reduce college affordability.

Tuition has gone up

Tuition has continued to increase this year at Kentucky’s public universities and community colleges — with the exception of the University of Louisville and Kentucky State University, although Kentucky State has submitted a proposal to the Council on Postsecondary Education to raise tuition and fees by five percent.

It is important to keep in mind tuition and fees make up only a portion of the actual costs of attending college (i.e., room and board, books, etc.). National research shows many community college students struggle with food and/or housing insecurity, despite the relative affordability of these schools compared to others.

Student loan debt in Kentucky has been rising and we rank third worst in the nation for student loan default.

While the 2016-2018 budget included a small increase in funding for the state’s need-based scholarships, the need is much greater than what these additional funds have been able to provide. The scholarship amounts are also small ($1,900 a year for a full-time student receiving a College Access Program grant) and the purchasing power of these scholarships weakens every year as tuition and inflation grow and scholarship amounts do not.

The new Work Ready Kentucky Scholarship is limited only to students enrolled in short-term credential programs (diplomas or certificates for specific trades and skills, not an associate’s degree) in five areas including health care and advanced manufacturing. The scholarship can be used for programs at several of the state’s universities and two private institutions; however, the scholarship just covers the amount of tuition and mandatory fees at a Kentucky community college. Most low-income students will not benefit as the scholarship is only paid out after Pell Grants and other scholarships have been applied to a student’s bill; the scholarship does not help pay for the many additional costs of college beyond tuition and mandatory fees — including books and fees for supplies, which can be quite expensive for some of these programs.

In addition, the Pell Grants so many low-income Kentucky students are relying on to attend college are at risk of deep cuts in the federal budget starting next year.

Performance funding for the state’s public universities and community colleges goes into effect this year. A concern with basing some state funding on institutions’ performance on certain metrics is that low-income, minority and academically underprepared students may be left behind. While the funding model does include specific metrics for degree attainment by low-income and minority students, the model could do more to prevent negative impacts. Institutions may be incentivized to become more restrictive with admissions, among other unintended consequences.

Performance-based funding is just one way low-income and minority students will especially face challenges from the trends in Kentucky higher education. Low-income students and students of color are less likely to enroll and graduate, especially when costs increase. These students face more financial difficulties — and are more likely to have student loan debt — even when they attend community college and receive Pell Grants. A disproportionate share of homeless community college students surveyed are students of color.