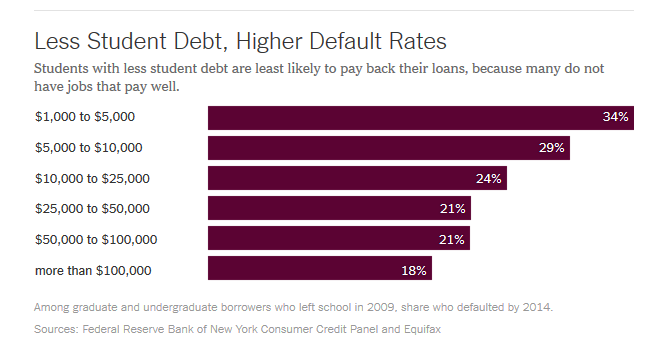 Data released today by the U.S. Department of Education shows  Kentuckians leaving college with student loan debt are among the most likely to default nationwide. The state’s new default rate of 15.5 percent is down from last year’s 16.3 percent, but Kentucky continues to have the 3rd-highest student loan default rate in the nation (behind New Mexico and West Virginia); the national default rate is 11.3 percent, down just slightly from 11.8 percent last year. This new default rate data underscores the college affordability problems in our state, particularly for low-income students.

The newly released three-year default rate is a calculation of the share of students whose loans entered repayment in 2013 who, within three years, missed payments for at least nine months consecutively.

Kentucky’s high student loan default rate gives important insight into the struggles of students who often have relatively small amounts of student debt but who cannot repay given their low incomes; this is despite Kentucky’s average student loan amount for college graduates, which has been on the rise, remaining below the national average. As described in a New York Times article on student debt in the U.S. last year:

“Defaults are concentrated among the millions of students who drop out without a degree, and they tend to have smaller debts. That is where the serious problem with student debt is. Students who attended a two- or four-year college without earning a degree are struggling to find well-paying work to pay off the debt they accumulated.”

According to the article, the average balance of a borrower in the Direct Loan program, the source of all federal loans for college students since 2010, is $15,000 — and 51 percent of defaulters left college with less than $10,000 in student loans. Often these are students who left college (many for financial reasons) without earning a degree, which impacts earnings and ability to repay. Below is a graph from the NYT article that highlights these issues:

As we’ve noted previously, here and here, low-income college students in Kentucky have much lower graduation rates, and the state has made little to no progress in closing these achievement gaps. Student loan default rates are higher at community colleges and for-profit institutions, where more low-income students enroll. Nationally, the student loan default rates at 4-year public institutions is 7.3 percent, while the default rate at 2- to 3-year public colleges is 18.5 percent; the default rate at 2- to 3-year for-profit schools is 16.8 percent and for 4-year for-profit schools is 14.0 percent (private 4-year colleges have just a 6.5 percent default rate). 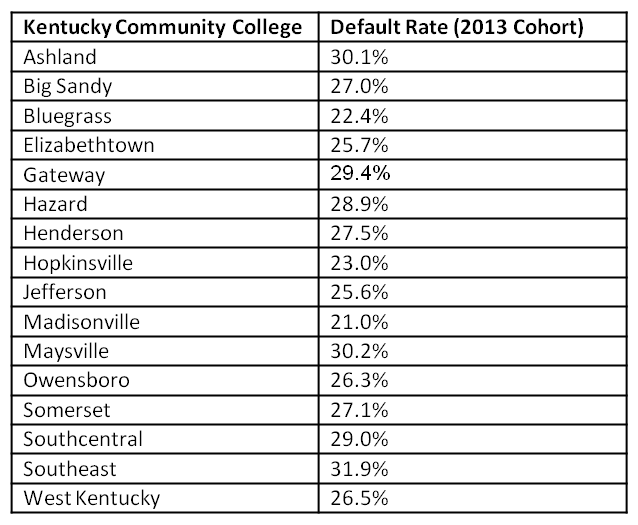 As we’ve described before, despite the relatively low tuition and fees at schools in the Kentucky Community and Technical College System the costs of attending are too high for many, and recipients of federal need-based Pell grants are more likely than others to take out student loans and to owe more. In addition, low-income Kentucky community college students in particular face many barriers to college completion.

Kentucky’s high student loan default rates underscore the need for the state to restore funding for its public universities and community colleges in order to make tuition more affordable for students and promote investment in student supports such as intensive advising, as well as the need to provide more students access to state need-based financial aid.