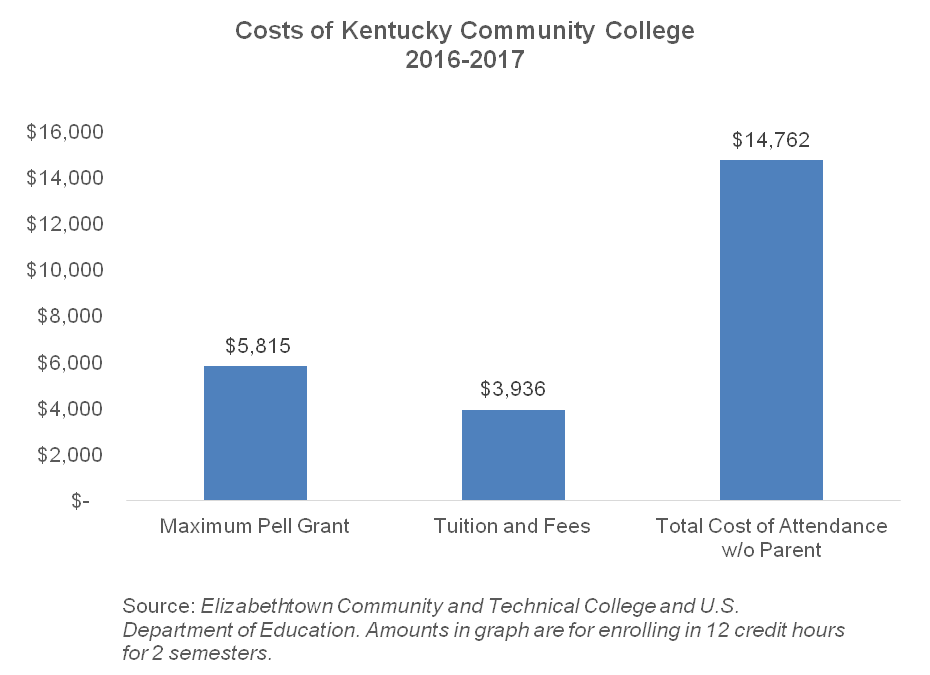 While community college is typically thought of as an affordable option for earning a degree, a recent report shows this is often not the case. Too many community college students do not have consistent access to food or stable housing, which makes it difficult for them to be academically successful. These issues likely contribute to Kentucky’s low community college graduation rates as well as achievement gaps for low-income and underrepresented minority students.

The report describes findings from a survey of basic needs insecurity (i.e. food and housing) among community college students in 24 states. Of those surveyed, 67 percent struggle to afford food and 51 percent are housing insecure. This means the majority of community college students have difficulty getting nutritious food consistently and easily (known as food insecurity), and they have difficulty paying rent and utilities (known as housing insecurity). An additional 14 percent are homeless.

Even community college is often not affordable for many students

Although community college tuition and fees are typically less expensive than other higher education options, many students have difficulty being able to afford to stay enrolled. This is the case even for students receiving Pell Grants and those who work while attending school.

A Pell Grant may cover tuition and fees, but there are a number of other costs associated with attending college, including housing, utilities, frequent moving, books, supplies and transportation. The graph below shows the difference between the maximum Pell Grant amount (many who receive Pell Grants do not get this maximum amount) and the estimated cost of attendance — typically a pretty conservative estimate — at Kentucky community colleges.

Because financial aid is insufficient for many, students often struggle to balance classwork with low-wage jobs that still do not cover all their bills. Approximately one-third of community college students who receive financial aid and work still experience food and housing insecurity. Homeless students have more difficulty securing work and when they did work, they worked longer hours, worked jobs with less reliable work schedules and are less likely to report being able to do schoolwork at their jobs.

While basic needs insecurity appears to be a problem for community college students across the country, the report found that some students are more likely than others to be food and/or housing insecure:

Additional research based on Census data finds food insecurity is a particularly big problem for adults and African American students at community colleges.

Although Kentucky students are not specifically included in these studies, our state should be concerned about these findings particularly given the growing number of children in foster care and the racial disparities in educational attainment and wages.

Report points to importance of critical federal and state investments

The report’s findings underscore the importance of critical federal and state investments that can help Kentucky community college students be more successful.

Federal programs such as Pell Grants for low-income students and the Supplemental Nutrition Assistance Program (SNAP), formerly known as “food stamps,” are currently at risk in the federal budget. The recent House budget resolution proposed cutting the Pell Grant program by $80 billion over 10 years and SNAP by at least 20 percent — or $150 billion — during that time period. As of February 2017, 102,360 students in Kentucky receive Pell and 651,889 participate in SNAP. Cuts to these programs would only worsen the issues of food and housing insecurity described in the report.

The House budget would also cut non-defense discretionary funding, which provides Kentuckians with housing and child care assistance, among other critical services. These cuts would harm many low-income Kentuckians, including those attempting to climb the economic ladder by earning a community college degree.

Greater state investment in higher education and need-based financial aid, among other supports, would also help to increase basic needs security among community college students. Food and housing insecurity would likely worsen as college increasingly becomes more expensive in Kentucky, in large part due to state budget cuts to higher education. It is important to note minority and low-income students especially feel the weight of budget cuts and resulting tuition increases because of existing financial difficulties. Studies show these students are less likely to enroll in college when tuition rates increase and, as mentioned previously, students of color and low-income students are more likely to experience food and housing insecurity. This is especially significant given the lower rates of degree completion for minority college students in Kentucky. College affordability and state funding for higher education are major factors that influence success for low-income and minority students.

While the new Work Ready scholarship will help some Kentuckians attend community college who would not otherwise, it’s not likely to alleviate the burdens of food and housing insecurity. Starting this fall, the program will cover the equivalent of community college tuition and mandatory fees for short-term certificates/diplomas in five occupational areas, including advanced manufacturing and health care, at schools in the Kentucky Community and Technical College System, several public universities and two private institutions. It is a last-dollar program, which means that Pell and other scholarships will be applied to a student’s tuition and mandatory fee bill first so many students who receive Pell — and struggle to secure adequate food and housing once tuition and fees are covered — will not end up benefitting from the scholarship.