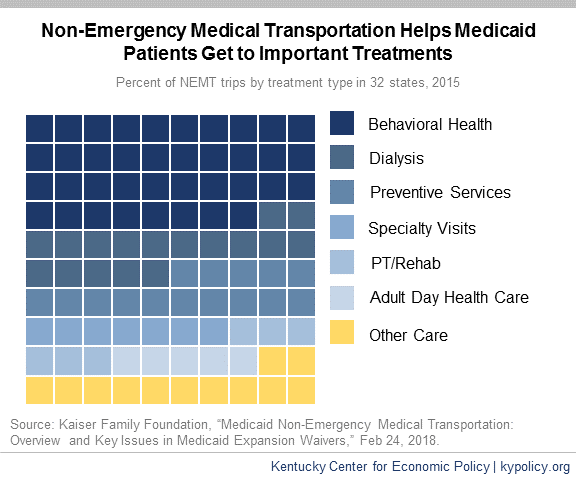 The Governor’s decision to end dental, vision and transportation benefits for Kentuckians insured through Medicaid was unnecessary and done without any public input. This coverage roll-back will erode health in the commonwealth and make it harder for all Kentuckians to get to a dentist or eye doctor. One in ten Kentuckians lost these three benefits this week.

There Is No Legal or Fiscal Justification to End These Benefits

There is no court directive to eliminate dental, vision and non-emergency medical transportation (NEMT). The recent federal court decision to deny Kentucky’s harmful changes to Medicaid, known as an 1115 waiver, protected Kentuckians from the loss of coverage. The ruling did nothing to change the structure or funding of the Medicaid program, and the same level of benefits being offered the day before the ruling were still available after the ruling. In fact, the state had to take completely separate action in order to deny these benefits by submitting a State Plan Amendment and new Kentucky Administrative Regulations.

Kentucky is not struggling to afford these small but vital benefits. The funding for these benefits is still intact, so there is no budgetary justification for these changes. They cost very little relative to the overall Medicaid budget, which was set based on expected need for all benefits including dental, vision and NEMT coverage. While it is true that the Cabinet for Health and Family Services recently reported a projected budgetary shortfall for the next two years, this is not uncommon, and has never before resulted in wholesale benefit reductions or elimination.

Oral health is a part of overall health, and when not appropriately cared for, can create serious and even deadly secondary conditions. It is also a fairly cost-effective preventive service. In California, after ending dental benefits for Medicaid enrollees, the cost of dental related ER visits increased by 68 percent on an average annual basis between 2009 and 2011. It is at least three times as expensive to handle dental pain in the ER as at a dentist’s office, and often leads to a pain medication prescription and failure to address the underlying problem. The implications for opioid abuse in Kentucky are a big reason the state should not remove dental benefits.

Within a $1.8 billion General Fund budget for Medicaid, dental benefits are relatively inexpensive. Among the states that offer comprehensive dental benefits, spending on dental coverage is approximately three percent of their total Medicaid budgets. Given that Kentucky is ending dental benefits for the expansion population alone, at most Kentucky would spend roughly one percent less overall. However, long-term costs associated with untreated dental problems means the state is unlikely to save anything in the years to come.

Another big concern is that Kentucky already faces a dental care shortage, which could be exacerbated by the benefit cuts.  According to the Kaiser Family Foundation, only 56 percent of Kentuckians have adequate access to a dentist, and 555,400 live in what is known as a Dental Care Health Professional Shortage Area. Medicaid pays a significant portion of Kentucky’s dental bills, but as fewer of these bills are covered, dentists may find it harder to do business in areas where there is a large concentration of Medicaid enrollees. These may choose to leave, and others may choose not to do business there to begin with, making it harder for anyone, including those not covered by Medicaid, to find a dentist.

Most immediately concerning is the confusion that comes from ending dental benefits practically overnight. People whose dental care is not supposed to be impacted by these benefit changes, such as children, are being erroneously turned away because of system errors stemming from a hasty policy change.

Kentucky’s vision benefits are very limited, but a key part of  protecting overall health and enabling people to work. Adults who qualify for Medicaid through the expansion only receive routine exams and diagnostic procedures – not glasses or contacts. These exams are critical for catching other conditions early, such as diabetes, glaucoma, and hypertension. Without routine eye exams, these conditions could go undetected until they become very expensive to treat or impossible to cure, leaving Medicaid members with otherwise preventable chronic conditions.

Vision benefits also benefit the labor force. Getting a prescription is necessary in order to purchase glasses in Kentucky, so without access to an eye exam, many will remain vision-impaired, making it difficult, dangerous or impossible to drive, read and perform other work-related tasks. A 2004 study by the Centers for Disease Control estimated that vision impairment costs the U.S. $35.4 billion in direct medical costs, other direct costs and productivity losses.

The Urban Institute estimates that, of the Kentuckians who just lost dental, vision and NEMT coverage, a little more than 43,000 live in a household without access to a car. While some of these may live in an urban area where some public transportation exists, many currently rely on NEMT to get to doctor appointments. As of 2015, the top 3 appointments that Medicaid enrollees used NEMT for in 32 states were behavioral health (including drug treatment), dialysis and preventive services. To achieve a central goal of Medicaid, which is to ensure Kentuckians can access medical care, transportation must be a key consideration; without it, Medicaid members are forced to choose whether to use ambulances for transportation or forgo care. 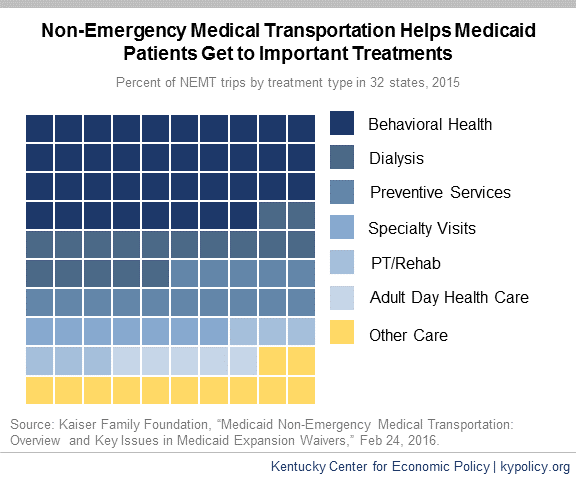