Black Kentuckians have had higher rates of infection and death from COVID-19 due to disparities in health caused by historical inequities in wages, the justice system, education, housing, health care and more. Last week Governor Beshear committed to ensuring every Black Kentuckian is covered by health insurance. Using the most recent data available, 6.4% of Black Kentuckians (21,000 people) are uninsured compared to 5.4% of white Kentuckians and 5.5% of all Kentuckians. Implementing strategies to cover all Black Kentuckians tackles the immediate crisis revealed by the pandemic and can pave the way for Kentuckians of all races to become insured. When all people can get the medical care they need, our communities and economy will be healthier and stronger.

Who are uninsured Black Kentuckians, and which strategies are needed to insure them?

People go without health insurance for two primary reasons. One national study found that nearly half of uninsured Americans went without coverage because they were not aware they qualified for Medicaid or marketplace subsidies (likely larger in states like Kentucky that have expanded Medicaid coverage). Another one-third simply couldn’t afford coverage.[i] It will therefore likely take a combination of strategies in order to close the coverage gap: 1) increased outreach and awareness and easier application processes to make sure those who are eligible sign up for coverage; and 2) new coverage policies aimed at making insurance more affordable. At the state level, the latter could include reinsurance, additional state subsidies on the marketplace, and a Medicaid buy-in or a public option.

Census data in the table below helps identify a roadmap for outreach to and coverage of Black Kentuckians based on age, income and other demographics. For instance, there are currently an estimated 2,000 uninsured Black children, some of whom may qualify for the Kentucky Children’s Health Insurance Program (KCHIP). KCHIP is available to children in families whose incomes range from 109% to 218% of the federal poverty level (FPL, which is $26,200 for a family of four), depending on their age and certain underlying conditions. Some portion of an additional 5,200 young Black adults, ages 18 through 25, could possibly join a parent’s insurance plan if it is offered through their job and made affordable. This age group of young adults has the highest uninsured rate at nearly 12%.

Some children and adults likely also qualify for Medicaid. Among the total 21,000 Black Kentuckians who are uninsured, an estimated 8,800 have incomes below 138% of FPL, making them eligible for Medicaid. An additional 10,300 with incomes between 139% and 400% of FPL may be eligible for premium subsidies on the health insurance exchange based on their incomes. A smaller group does not qualify for either due to their higher incomes.

A substantial number of Black workers are uninsured, likely either because their employer does not offer health insurance or the coverage they offer is not affordable. Nearly a quarter of uninsured Black workers are employed by restaurants and other food services, an industry with particularly low rates of coverage for its workforce. However, some of these workers may qualify for Medicaid or could purchase insurance on the health exchange if the policies mentioned above to reduce out-of-pocket costs on the exchange were implemented. 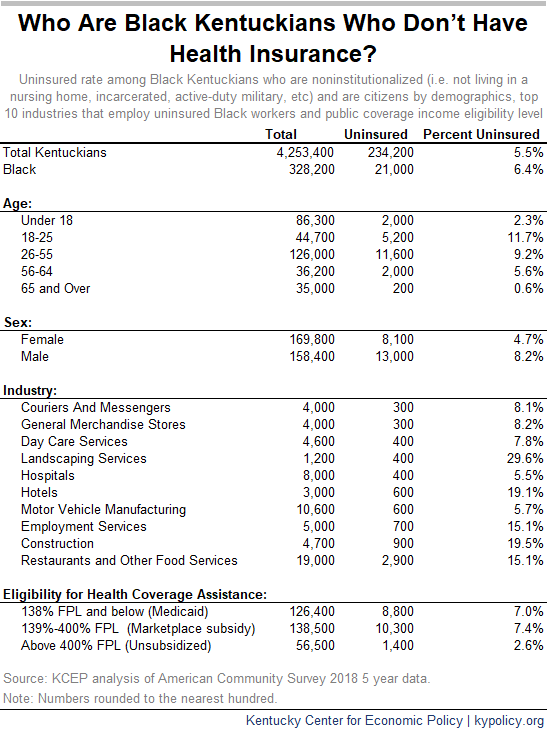 Uninsured Black Kentuckians live in every part of the commonwealth

A strategy to get 100% of Black Kentuckians insured is important in its own right, and could pave the way to getting many of the other 213,200 uninsured Kentuckians covered as well. There is evidence from the roll out of the Affordable Care Act (ACA) that suggests a combination of outreach, public awareness and enhanced coverage options designed to achieve universal coverage for Black Kentuckians can lead to more Kentuckians of all races becoming insured.

In Kentucky and across the country, as the ACA was implemented, many who were uninsured but had been eligible for coverage prior to the ACA signed up because of increased public awareness – a phenomenon known as the “welcome mat” effect. In fact, one study showed that nearly a third of new signups in the early years of ACA coverage were a result of this effect. A media campaign to sign up Black Kentuckians will likely result in people of other races becoming aware of their eligibility and signing up as well. In addition, new efforts by the state to make insurance more affordable, such as through expanded premium subsidies, a reinsurance program, a Medicaid buy-in plan, or a public option, would be broadly available to all the uninsured.

Governor Beshear raised a critical racial justice issue in his important call to cover all Black Kentuckians with health insurance and help address historic inequities. Actions to achieve that goal will ultimately improve the physical, mental and financial well-being of Kentuckians of every race, ethnicity, age and county.

[i] Most of the remainder without coverage lack citizenship and currently do not qualify for publicly-subsidized coverage.