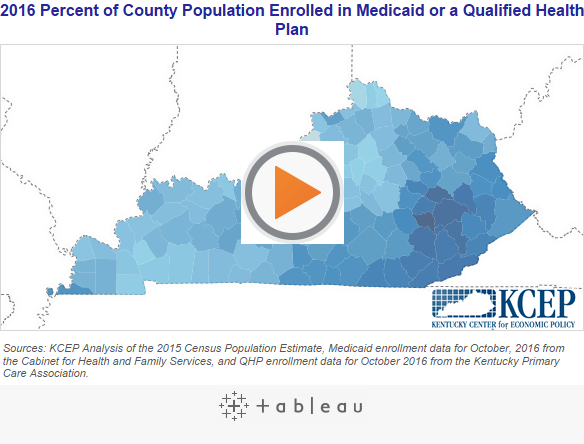 Nearly one in three Kentuckians has health insurance either through Medicaid or with a federally subsidized Qualified Health Plan (QHP) from the health insurance marketplace (formerly Kynect). If Congress moves forward with repealing the Affordable Care Act (ACA) and making big structural changes to the traditional Medicaid program, Kentuckians across the state are at risk of losing coverage or having it weakened. We’ve previously described how an ACA repeal would hurt state-wide, but county and regional impacts would vary.

The map below shows the share of Kentuckians that have insurance through Medicaid or QHPs. Medicaid enrollment includes low-income adults as well as children, the elderly in nursing homes and Kentuckians with disabilities.

Around a third of Kentuckians with Medicaid would lose coverage with a rollback of Medicaid expansion (here’s a county-by-county look at them, specifically). The rest could have their health insurance threatened by harmful changes to the structure of Medicaid through either a block grant or a cap on federal spending per Medicaid enrollee. Such proposals would erode federal funding for the healthcare program over time and force states to reduce provider payments, limit who or how many can be insured, or roll back benefits. Medicaid would be further weakened through a repeal of improvements to the program in the ACA. The push to enact either a block grant or per-capita cap would extend beyond even what the ACA changed, and erode safeguards established during the 1960’s.

Those with QHPs are also at risk of losing coverage. Elimination of the premium tax credits would make insurance unaffordable to many of the 83,000 Kentuckians who are currently benefitting from such plans. Even if the help paying for coverage isn’t completely revoked, there’s evidence  insurance companies may still choose to pull out of the health exchanges altogether.

When looking at insurance coverage through Medicaid and QHPs at the county level, the percent of the population falling into this category ranges from 13.2 percent in Oldham County to 67.5 percent in Owsley County. Although most counties have less than half of their population covered through Medicaid or QHPs, 5 counties have Medicaid/QHP coverage rates at or above 60 percent:

Repeal of the ACA would likely triple the uninsured in the Commonwealth, cause chaos in the insurance market and further harm Kentuckians. Replacement proposals that include reaching beyond the ACA would erode Medicaid, and reduce or eliminate health insurance coverage for one in three Kentuckians. Congress should improve the ACA, and any healthcare program, so that more Kentuckians have quality, affordable health insurance, and Kentucky’s representatives in Washington should be aware of what damaging changes like these would mean back home.