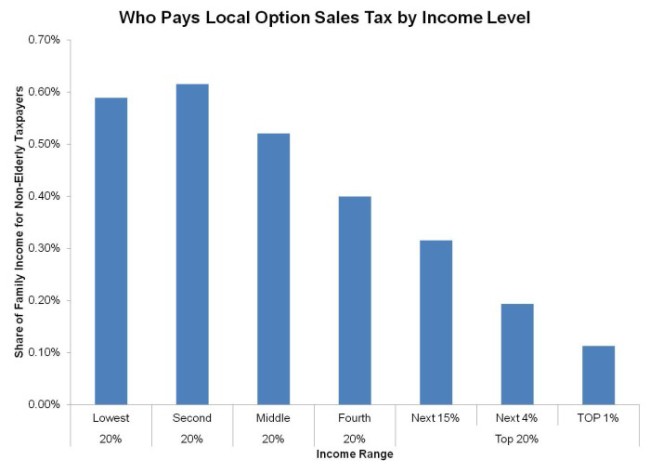 Large, profitable corporations are now saying they shouldn’t have to pay their share if the legislature moves forward with putting a local option sales tax on the ballot, according to an Associated Press story.

The article reports that an organization representing large utility customers such as General Electric and Ford says that businesses could face paying an extra $24 million from the new sales tax on their industrial electricity purchases. The AP cites the Senate majority leader saying that creates a problem for the bill in his chamber and the House speaker saying these companies could “easily be exempted.”

But Kentucky already has a problem with tax fairness when it comes to the taxes corporations pay versus everyone else. It’s the case, for example, that corporate income taxes in Kentucky (including corporate license taxes and the limited liability entity tax) have fallen from 11.6 percent of state General Fund revenue in 1989 to 7.1 percent last year—even though corporate profits are at a record high. That’s in part because of a growing set of tax breaks that let companies out of paying taxes and corporate tax loopholes the state hasn’t yet closed.

Kentucky’s top corporate income tax rate is six percent and the national average is 6.25 percent, but because of loopholes and tax breaks, many profitable corporations end up paying a lot less. General Electric, for example, made $27.9 billion in profits over five years according to a report released last year, but paid corporate income taxes to all states at only a 1.7 percent rate. The report details “in stark terms just how successful large, multistate and multinational corporations have become at shirking their tax responsibilities to state and local governments,” and points to economic development tax breaks, use of tax shelters and changes in federal tax laws causing much lower state taxes paid than should be expected.

Letting corporations out of the proposed sales tax would make the tax even less fair. As seen in the graph below, it’s already the case that the lowest-income Kentuckians would pay far more as a share of their income than would the richest 1 percent. That’s how sales taxes work, even with existing exemptions for food, prescription drugs and residential utilities.

Businesses benefit greatly from public investments in infrastructure, education, health and other areas that improve their workforce and make them more competitive. It’s only reasonable that they also pay their share toward the cost of such investments.

Kentucky has much to do to make its current tax system fairer without finding ways to create new inequities.