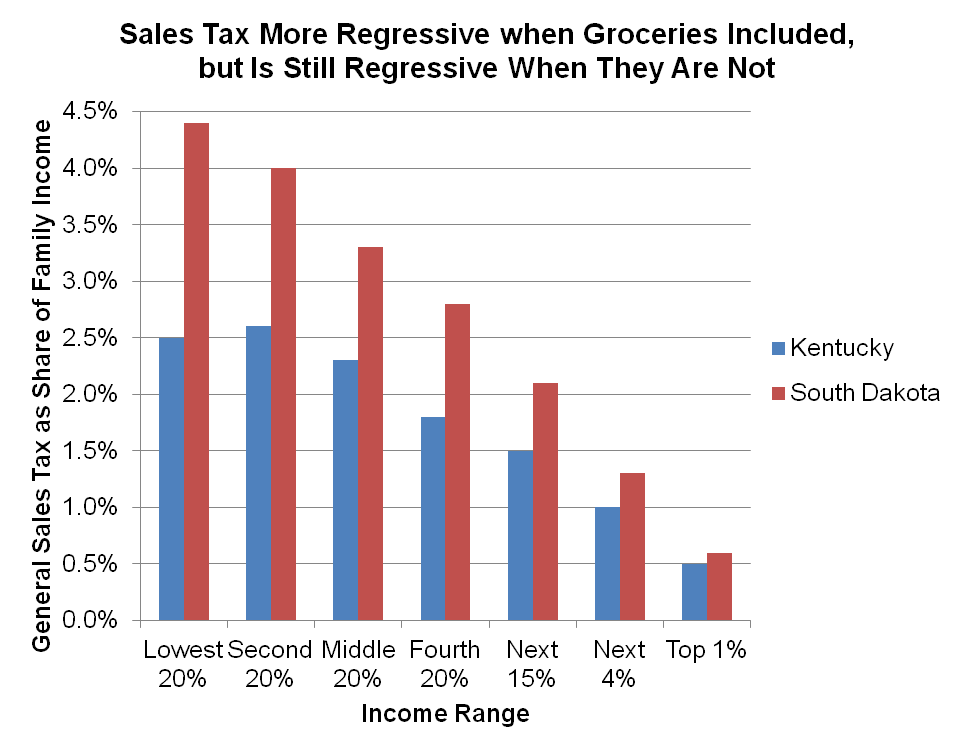 Some proponents of a local option sales tax are making the claim that the regressive nature of the sales tax is taken care of in Kentucky because the state exempts groceries and other items like prescription drugs from the tax.

But while the sales tax would be even more regressive if those items were included, exempting them doesn’t change the fact that lower-income people pay a higher share of their income in sales taxes than do the wealthy.

The regressive nature of the sales tax has to do with the fact that poorer people, out of necessity, typically spend all of their income to make ends meet. Higher income people, in contrast, are able to save a portion of their income, meaning that portion is not subject to sales taxes.

The effect of exempting groceries can be seen by comparing Kentucky and South Dakota in a study of the distributional impact of state and local taxes by the Institute on Taxation and Economic Policy. South Dakota has a 4 percent state sales tax and allows local sales taxes of up to 2 percent; the average combined sales tax rate across the state is 5.83 percent, very close to Kentucky’s sales tax of 6 percent. However, South Dakota’s sales tax has a very broad base, including groceries and many services.

As shown in the graph below, including those items makes South Dakota’s tax a higher share of income for those on the bottom of the income scale than Kentucky’s. But who pays the sales tax in each state follows the same distributional pattern of declining as incomes rise, making the tax regressive.

When considering all of the pros and cons of a local option sales tax, it’s important to understand accurately who pays the tax.