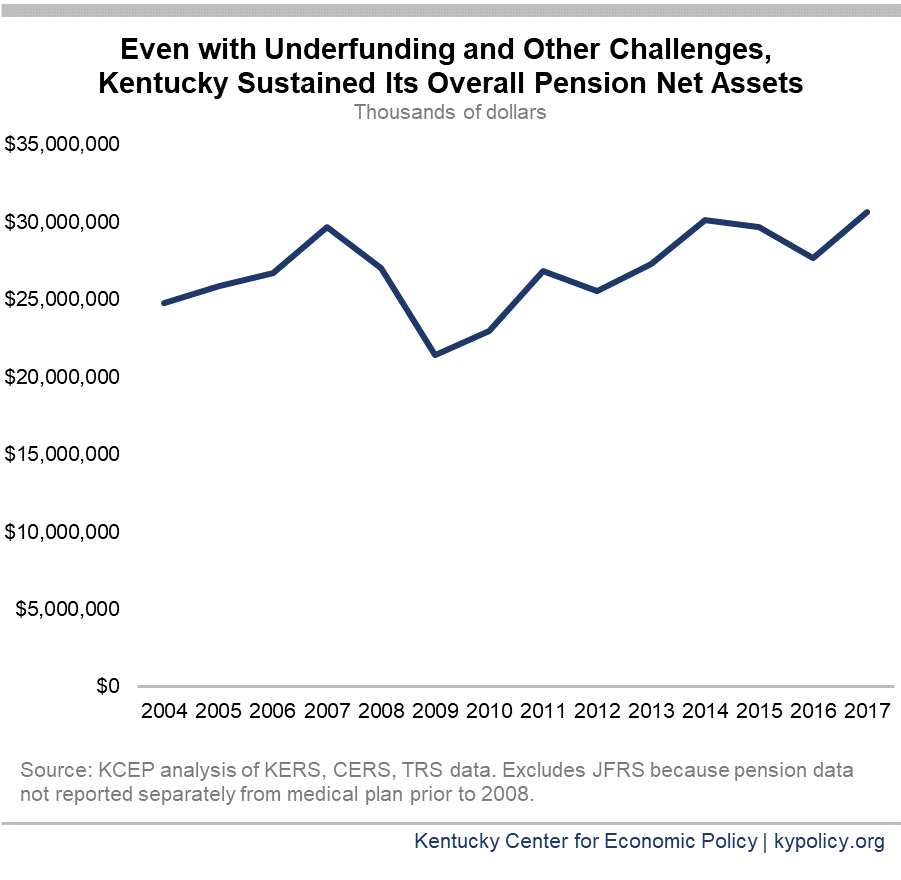 Click to view this report and its appendix as a PDF.

Plenty of attention is paid to how badly funded Kentucky’s public pension plans are. Compared to other states, our pensions certainly are worse off – with the Kentucky Employees Retirement System (KERS) non-hazardous plan in particularly weak condition. But exactly how bad is the situation overall and how aggressively do we need to pour money into pensions to make the situation better?

We need the right metrics to understand systems’ health

The real condition of Kentucky’s retirement plans is distorted by a narrow focus on their funded ratios, which is a snapshot of how much the plans have in assets today compared to benefits owed decades into the future. Also commonly discussed are estimates of the total dollar value of the unfunded liabilities that are owed, which are sometimes exaggerated.1

The funded ratio looks at where our systems are currently compared to where they need to be to achieve 100 percent full pre-funding, based on a variety of assumptions. A full pre-funded plan has all of the assets it needs to pay benefits that have been earned given certain projections about the future.

Especially given the condition of Kentucky’s pension systems, we need metrics that help us understand how to improve from where we are today. It is less helpful to compare us to an ideal situation that is not achievable anytime soon and is not necessary to ensure ongoing payment of benefits.

Another, more helpful way to evaluate the health of a public pension plan – and to understand what actions are needed to improve them – is to look at the plan’s ability to pay benefits without risk of falling into pay-as-you-go status, which is where contributions to the system go directly to paying beneficiaries. Pay-as-you-go is more expensive than pension plans like Kentucky’s where investment returns make up the bulk of what is paid to retirees in benefit checks. To better protect against pay-as-you-go status, plans need to build up a cushion of net assets — which is also beneficial because investment returns will be greater the more assets on hand to invest. To grow net assets, in most years income (primarily in the form of employer and employee contributions and investment returns) must exceed payouts (primarily in the form of benefit payments).

As a whole, Kentucky’s pension cushion remains substantial despite underfunding

How does Kentucky fare using this measure? In the graph below, we look at the net assets of Kentucky’s public pension plans as a whole. While it matters how well-funded each individual plan is, from the state’s perspective all pension benefits are legally owed to workers regardless of the plan, so looking at the sum total of the plans is a good way to understand the big picture of Kentucky’s assets and liabilities. As shown in the graph, the total net assets of Kentucky’s pension plans have actually kept stable over the last 14 years and are on a growth path since the recession — even though this period has been labeled a disaster when looking only at measures like the funded ratio.

The graph below show why net assets grew — because contributions plus investment returns exceeded benefit payments in 9 of the last 14 years. 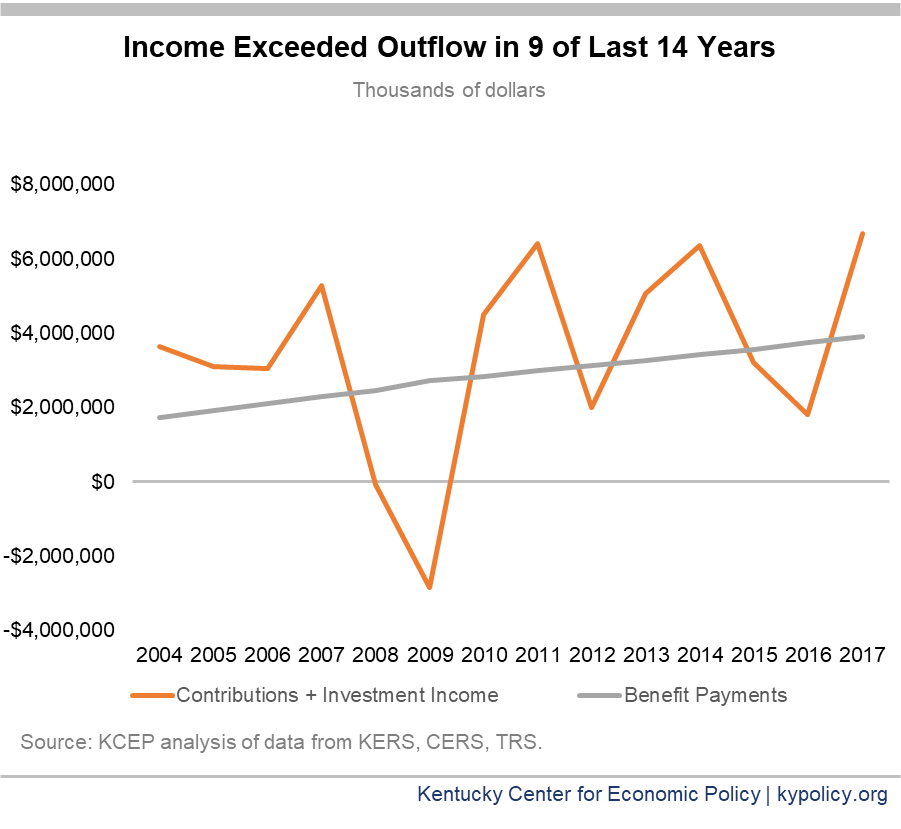 Net assets would have had even stronger growth if payments had met the actuarially required contribution level (and if the Great Recession had not hit). But despite underfunding and other problems, Kentucky’s plans still have $31 billion in net assets today compared to just $3.9 billion in benefits owed each year, as shown in the graph below. That gives us a more than decent cushion from which to continue building in the future. 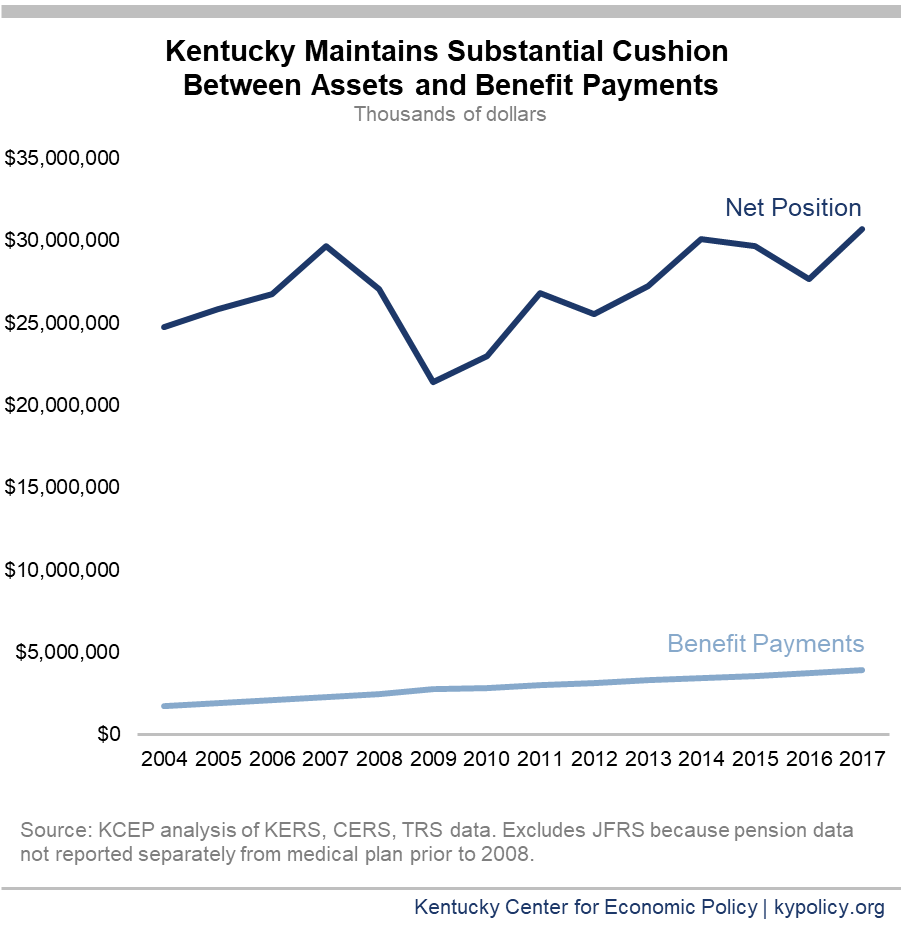 Most of that overall strength is due to the Teachers’ Retirement System (TRS). The significant assets and positive trajectory of that plan allows us to better target extra monies to the poorly funded KERS non-hazardous plan and the smaller State Police Retirement System, whose asset trajectories have been negative until recently. The County Employees Retirement System, like the TRS, also has had positive growth in net assets relative to benefits paid. The appendix to this report contains graphs showing the wide variety in assets compared to benefit payments across Kentucky’s state and local plans.

So even in this rough period the big picture is better than is often understood. Another piece of good news is recent: the huge increase in contributions in the 2017-2018 budget puts us on a much stronger path.4 If a level of contributions in that range continues moving forward, net assets will grow much more rapidly than they have in the past across all plans.

It’s true that we could choose to make much bigger contributions beyond the 2017-2018 increase and grow our net assets more rapidly (such as by using the level dollar method for all systems) — but we cannot do that without a plan for where those dollars will come from.5 Simply slashing K-12 education, making higher education even less affordable and reducing access to services for the most vulnerable is not a viable option. And a big question is: How fast do we actually need net assets to grow?

Kentucky’s goal should be forward progress — gradually improving the health of our pension plans from where they stand today. What matters is that our contributions are big enough to put us on a path to net asset growth in all plans, especially those that are worse off. With the big stride in the last budget, we are well on our way already.