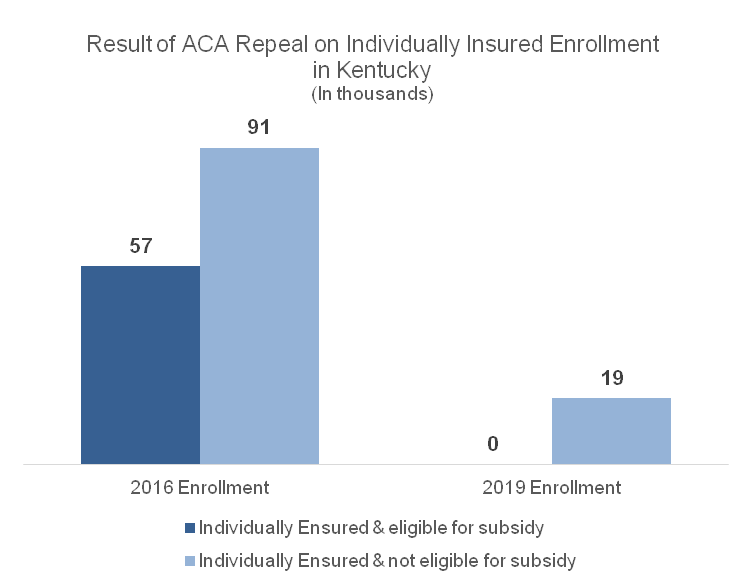 A partial repeal of the Affordable Care Act would likely result in close to half a million people becoming uninsured in Kentucky, including those who buy health coverage directly from an insurance company. According to the Urban Institute, 130,000 Kentuckians who are individually insured would lose coverage. Because the ACA requires everyone to have insurance or face a penalty, a larger, healthier and younger pool of plan-holders has made it possible for insurance companies to cover people who have conditions that make them more expensive to cover like asthma, diabetes, and even pregnancy. Repeal would undo that and create what’s called a “death spiral.” 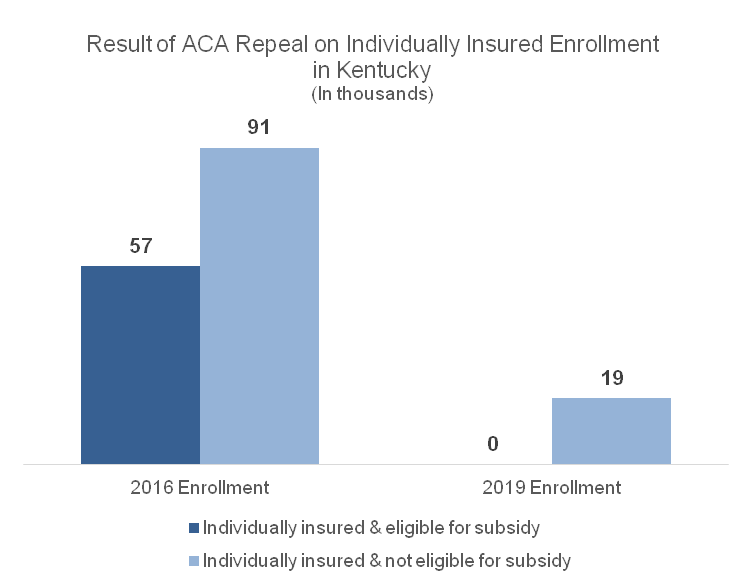 What Is a “Death Spiral?”

The Affordable Care Act (ACA) has been very successful in getting Kentuckians insured through the expansion of Medicaid and by offering subsidized insurance plans to low-income Kentuckians. Uninsured rates have also gone down thanks to the ACA ban on insurers denying coverage based on preexisting conditions and the requirement that everyone have insurance coverage or else face a penalty. These two provisions are related – it’s only with healthy, less medically expensive people gaining coverage that insurers could afford to cover sicker people with higher medical expenses. As a result of this relationship, removing the individual mandate, as well as the loss of federal subsidies for Qualified Health Plans through the marketplace, would trigger what is known as a “death spiral,” Here is how the death spiral would work: 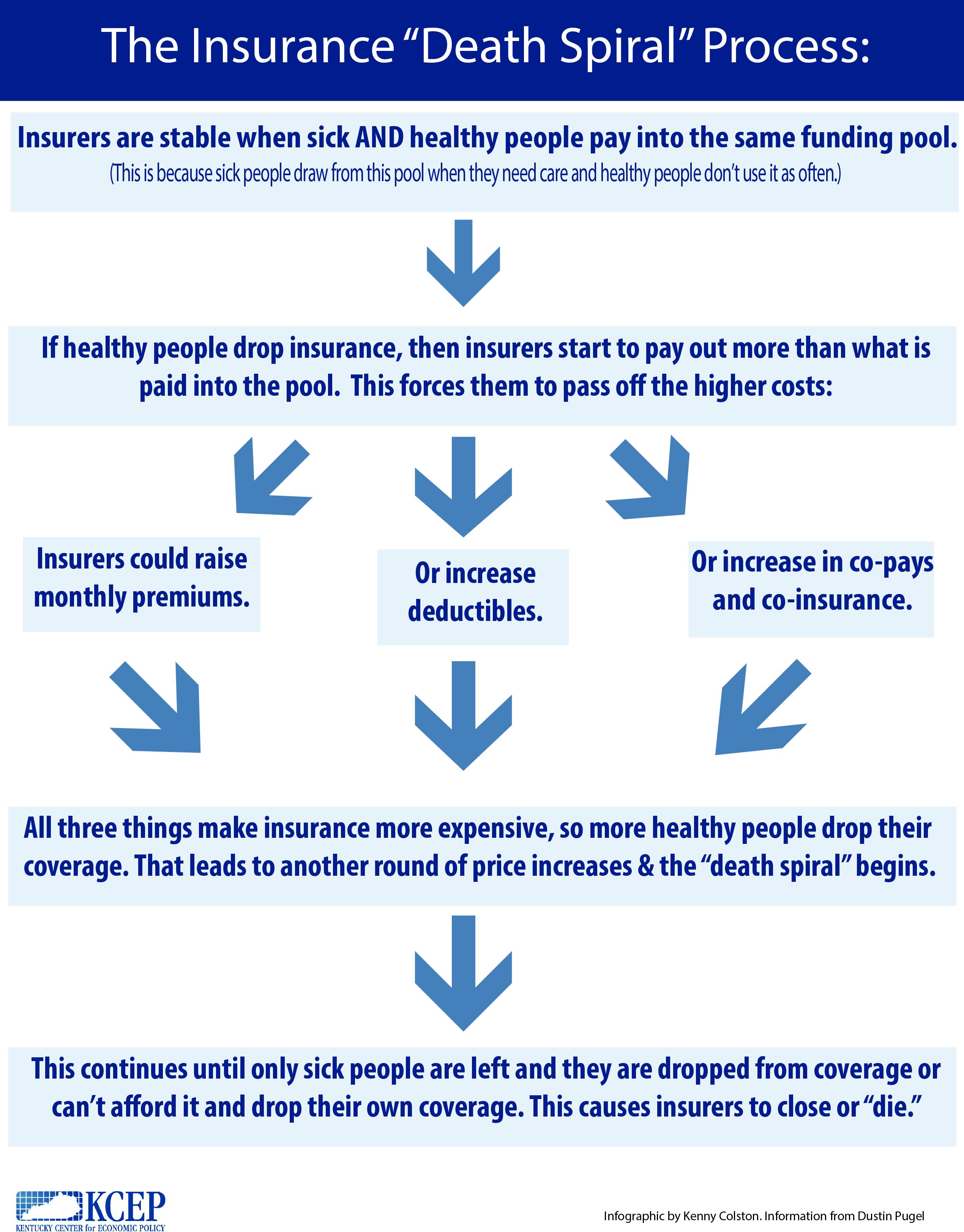 Although some have claimed that the ACA is already in a death spiral, evidence has not shown this to be true. According to the American Academy of Actuaries and Standard & Poor’s, you would expect to see declining enrollment in the ACA marketplaces or continually escalating premiums. But nationally, marketplace enrollment has grown each year since 2014. And the sharp rise in insurance premiums this past year was a “one time pricing correction” not likely to be seen again in coming years.

As Kentuckians have taken advantage of federally subsidized Qualified Health Plans since 2014 through the ACA, the individual insurance policy market has expanded. Furthermore, because the share of employers offering insurance as a benefit has been falling — from 54.4 percent in 2012 to 47.8 percent in 2015 – there has been an increasing reliance on individual insurance policies.  More broadly the economy was nearing recovery in 2015 from the hit it took during the Great Recession. All of these factors combined so that people felt they could start buying insurance again. With repeal, that’s not likely to continue.

The ACA Repeal Would Hurt All Kentuckians

The ACA had a wide-ranging impact on the healthcare of Kentuckians. Besides the roughly half million Kentuckians enrolled in either the  Medicaid expansion or  Qualified Health Plans whose coverage would be jeopardized from a repeal of the Affordable Care Act, chaos in the individual insurance market, loss of patient protections and loss of billions in federal funding would be felt in every corner of the commonwealth. Even before Congress finalizes legislation to repeal parts of the law, President Trump can shock the healthcare sector, specifically the individual insurance market, through actions like the executive order he signed just after his inauguration. It did not detail what exactly what parts of the ACA would or wouldn’t be enforced, but that very ambiguity is enough to give insurers a second thought about participating in the individual market this coming year.

The complexity and interdependent nature of the law makes it nearly impossible to remove parts of it without causing damage to the whole healthcare system, including people who buy insurance individually. This is not the time to move backward on the gains we’ve realized as a commonwealth. Congress can and should improve on the ACA, so that more Kentuckians have quality, affordable healthcare. Instead it is tilting full steam toward repeal.