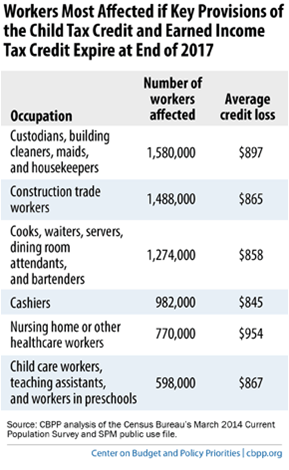 Both programs are refundable, meaning that if the credits or other factors leave a family owing no federal income taxes, the government will refund the full balance of the EITC and part or all of the CTC. Families tend to use this much-needed income boost on basic living expenses like housing, groceries, childcare, transportation and health care. They are also likely to pay off debt and invest in education.

Largely as a result of this refundability, the EITC and CTC are effective poverty reduction policies, encouraging and supporting work and supplementing income for low-wage workers. Between 2010 and 2012, they lifted an average 154,000 Kentuckians, including 88,000 children, out of poverty each year.

The EITC and CTC help moms and dads build a better life for their families now and also into the future. Research shows that they are associated with:

• Better maternal and infant health including a higher likelihood moms receive prenatal care, fewer low-weight and premature births and a lower likelihood of tobacco and alcohol use during pregnancy;

• Better employment outcomes for children later on in life through more hours worked and higher earnings.

Despite mounting evidence that the EITC and CTC effectively help families meet short term needs and achieve long-term success, they are in jeopardy for many families if key improvements are not made permanent. During the Great Recession, the income threshold at which the EITC phases out for married couples was raised and the size of the credit was increased for families with more than two kids. Policymakers also expanded the CTC by lowering the earnings threshold for eligibility. But if Congress allows these changes to expire at the end of 2017, some 180,000 Kentucky families with 323,000 children will lose part or all of their credits. The workers most likely to be affected nationwide and the average size of the cut they will experience are shown in the table below:

In addition to protecting the EITC and CTC and preserving their many benefits for working families, Congress can also boost employment and fight poverty by strengthening the EITC for childless workers. Under a proposal from President Obama that would expand eligibility for the credit as well as its size (and a similar proposal from House Ways and Means Committee Chair Paul Ryan), the EITC for full-time minimum wage workers in this group would increase from $22 to $542 in 2015. Roughly 187,000 workers in the Commonwealth would benefit.

Kentucky lawmakers can also take action to assist working families and individuals in the Commonwealth by creating a state level EITC. 25 states and the District of Columbia have them, including Illinois, Indiana, Ohio and Virginia. In Indiana, Illinois and 20 other states, the credit is refundable. Just this past session of the Kentucky General Assembly, a bill in the Senate would have created an EITC at 10 percent of the federal credit. And a bill in the House proposed creating and paying for a 7.5 percent credit by closing corporate tax loopholes.

Click here to read about the fathers who benefit from the EITC and CTC, including 180,000 Kentucky dads.