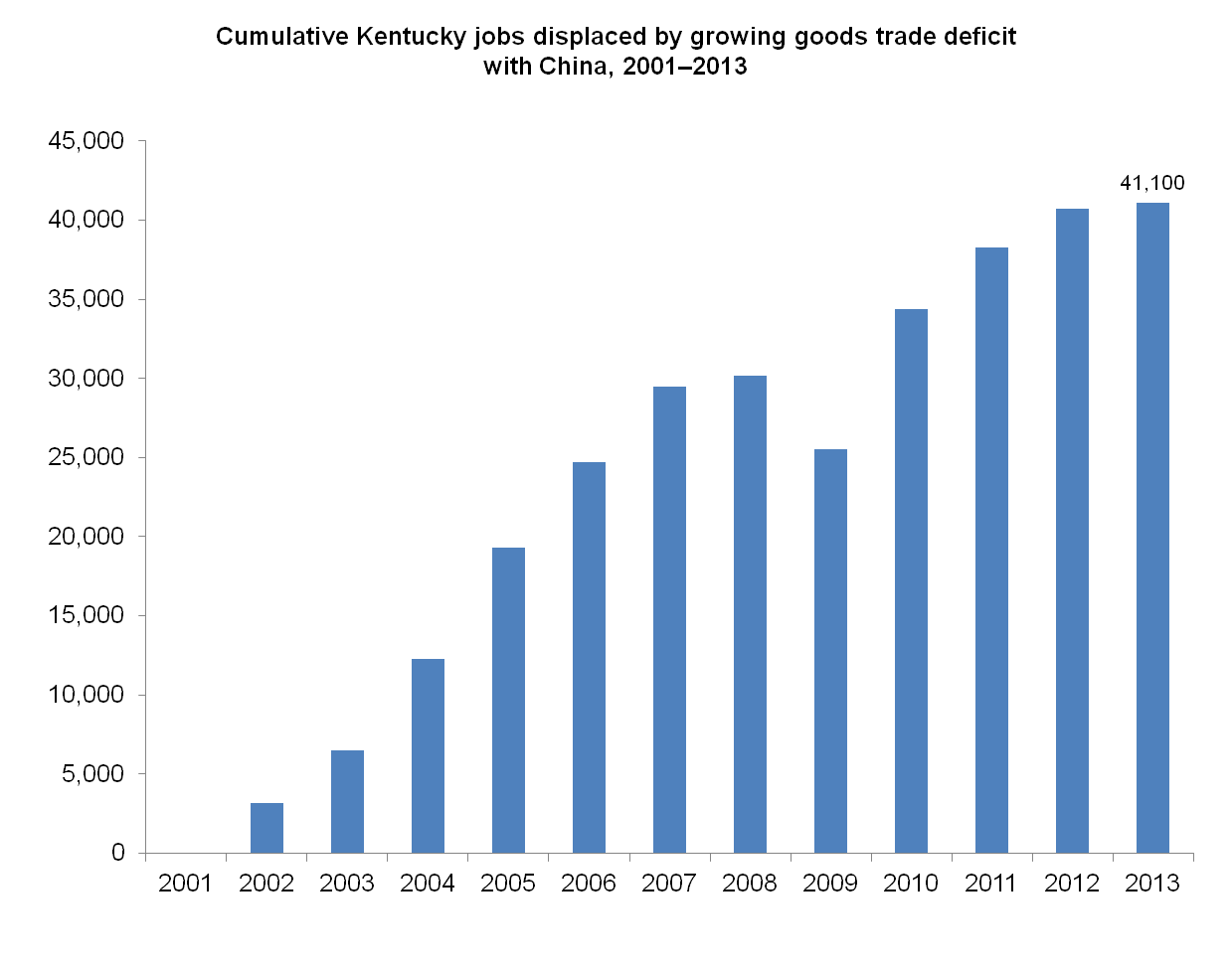 Kentucky has paid heavily for the U.S.’s growing trade deficit with China—41,100 fewer jobs between 2001 and 2013 according to a new report from the Economic Policy Institute (EPI). Since China entered the World Trade Organization (WTO) in 2001, its use of currency manipulation and other policies have suppressed the relative price of Chinese goods, costing 3.2 million U. S. jobs and depressing workers’ wages.

Kentucky’s job losses from the widening trade deficit with China rank the state 17th hardest-hit in the nation, according to EPI. More than three out of every four lost or misplaced jobs were in manufacturing (31,600), with particularly steep losses in computer and electronic parts manufacturing (10,700 fewer jobs), apparel manufacturing (4,500); industrial supplies including plastics and rubber products (4,000); and electrical equipment, appliances and components (2,500). The Commonwealth’s status as a strong manufacturing state has meant it’s had more jobs to lose in competition with China (see table at end for more detail on jobs lost by industry).

In total, the state lost 53,000 manufacturing jobs between 2001 and 2013, meaning the trade deficit is responsible for about 60 percent of the decline in the state’s factory jobs over that period. 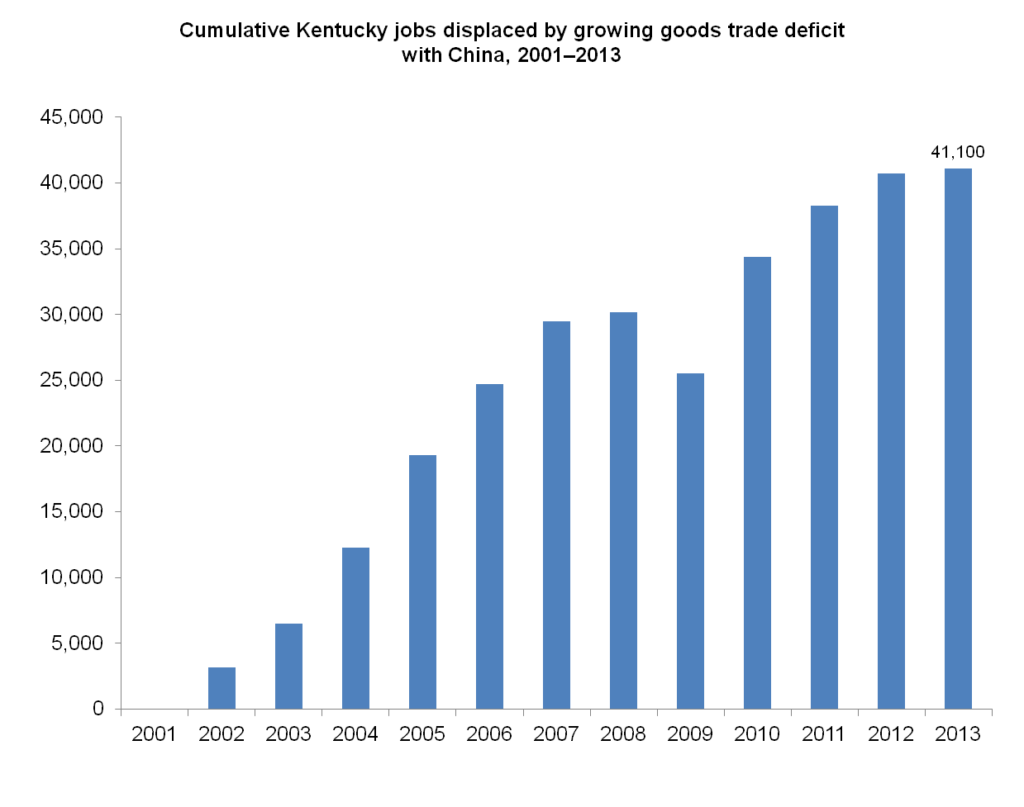 Currency manipulation is a big part of the problem

A primary reason the trade deficit has exploded is that China does not allow its currency, the yuan, to fluctuate freely against the value of the dollar. That makes exports from China cheap and imports from other countries expensive. The Chinese government has kept its money cheap by buying foreign currencies and flooding the market with yuan—a practice called currency manipulation. As of June 30, 2014, about 70 percent of China’s nearly $4 trillion in foreign exchange reserves were in U.S. dollars. One economist estimated in 2012 that the yuan was “one-sixth of what it should be.”

In a report earlier this year, EPI estimated that ending currency manipulation over three years through penalties or offsets on imports from countries like China would reduce the trade deficit by as much as $500 billion, create up to 5.8 million jobs, and reduce the federal budget deficit by $266 billion each year.

The Chinese government also uses other legal and illegal policies to bolster its trade surplus such as direct export subsidies, nontariff barriers to imports and dumping cheap goods in foreign markets. China’s extensive suppression of labor rights drives down workers’ wages, keeping production costs low—an incentive for foreign direct investments in Chinese factories and a big cause of U.S. jobs being outsourced to China. The agreement through which China entered the WTO failed to provide any protections or improvements for workers, and it also failed to hold China to higher environmental standards, making it harder for competing economies to take better care of their workers and natural resources, as well.

The trade deficit is costing Kentucky workers’ wages, too

41,100 jobs and the associated wages are not the only casualties of the China trade deficit for Kentucky: because competition with China has driven down workers’ bargaining power, it also means less pay for low-wage workers in general. One economist measuring the effect of trade with less developed countries on American wages found that full-time workers without a college degree make about $1,800 less per year.

Ending currency manipulation, lifting labor standards and leveling the global economic playing field go hand in hand. The current trade relationship between the U.S. and China does not adequately serve the vast majority of the Chinese and American workers who make and buy the goods being traded.

See EPI’s report for a deeper analysis of the problem. 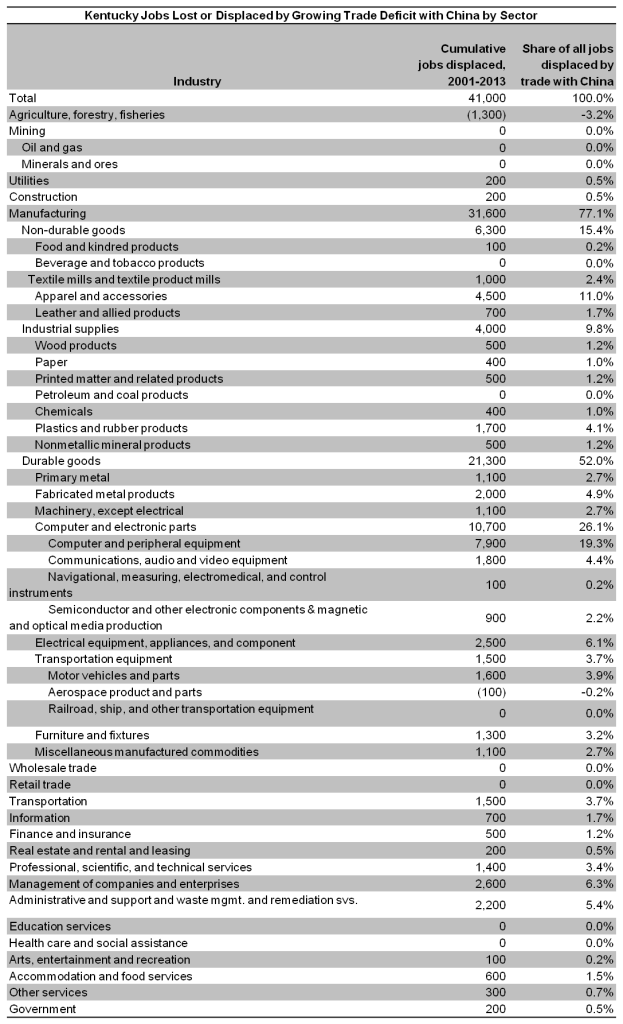