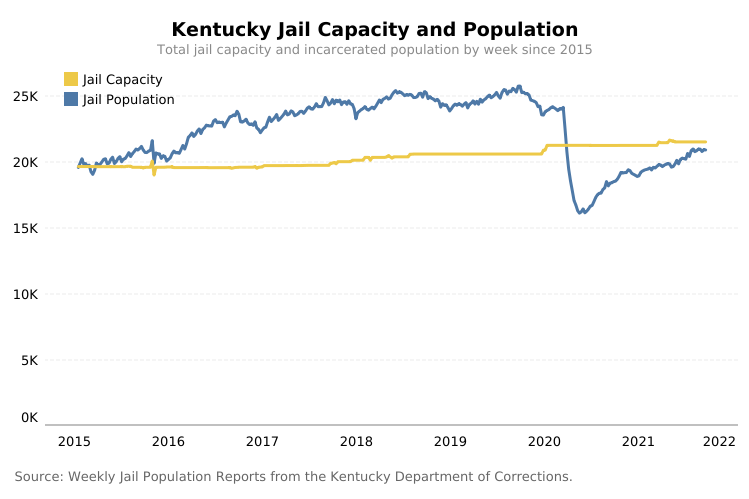 The U.S. incarcerates 5 times more people per capita than other wealthy countries. Yet, while some states are succeeding at reducing incarceration and its harms to individuals, families and communities, Kentucky’s rate remains 40% higher than the U.S. average. A new report from the Kentucky Center for Economic Policy explains how, in a context of local fiscal strain, perverse financial incentives for counties to maintain high incarceration and overcrowded jails are preventing progress and harming lives.

Historically, overcrowding in state prisons related to “tough on crime” penalties in the war on drugs led to a 1987 court case requiring the state to pay counties for holding people in state custody. Today, close to half of individuals serving felony sentences for the state do so in county jails, making Kentucky one of just two states in which such a large share of individuals in state custody serve their sentences in county jails.

At the same time, Kentuckians who are incarcerated pretrial or on misdemeanor sentences are legally in county custody, with counties’ related costs determined by state laws and funding decisions as well as local judges and prosecutors. To offset those costs, counties take on more individuals in state and federal custody, often overcrowding and sometimes expanding jails to house more people — the latter a costly and fiscally risky strategy that ultimately worsens rather than alleviates the pressure to overcrowd. Jails also create work crews of incarcerated people and charge them fees for things like booking and phone calls.

“Marginal attempts to lock up fewer people in Kentucky have yet to lead to meaningful change. Despite having policy tools, we still haven’t dealt with the problem that Kentucky counties balance their budgets with revenue-generating tactics stemming from incarceration,” said Dr. Ashley Spalding, Kentucky Center for Economic Policy Research Director and the report’s lead author. “Because the current system produces both high costs and high revenues, we are caught in a vicious cycle of fiscal pressure to keep jails full and even overcrowded. This cycle derails Kentuckians’ lives and diverts public resources toward incarceration rather than addressing the root causes of challenges in our communities.”

The report looks at counties’ fiscal strategies related to incarceration as they play out statewide and in five Kentucky counties. Early in the COVID-19 pandemic, jail overcrowding was temporarily alleviated statewide through a series of sentence commutations and an administrative order to expand pretrial release geared toward slowing the spread of the virus. Now, less than two years later, Kentucky’s jail population threatens to climb past capacity once again, with many jails already exceeding capacity.

In Madison County, for example, low rates of pretrial release — with the most common, most serious charge for pretrial incarceration being drug possession — contribute to persistent overcrowding, leading the county in 2019 to propose building a costly new jail that included more capacity for holding people in state and federal custody. In other counties like Leslie and Barren, overcrowded jails already house a large share of people in state and federal custody in order to generate revenue and alleviate fiscal pressures. The report also looks at trends in Rowan and Boyle counties.

“As part of our report, we spoke with county jailers and other local officials, painting a picture rife with tensions. One jailer told us, ‘You can never go too big’ with building jails, and the data shows that when bigger jails are built, they are quickly filled. While some local actors advocate for reforms that would reduce pretrial incarceration and counties’ related costs, there is resistance to sentencing reforms that would stem the tide of state incarceration and thus limit revenue options once a county has ‘gone big’ with its jail,” Spalding said. “We know that incarceration can be safely reduced. We know that local governments need fiscal relief. And we know that more public resources for safe housing, mental health and substance use treatment in communities rather than jails can help put us on a better trajectory.”

The report describes multiple policy solutions that work together to reduce incarceration and free up resources to achieve greater well-being in Kentucky communities.

The report can be read in its entirety here.