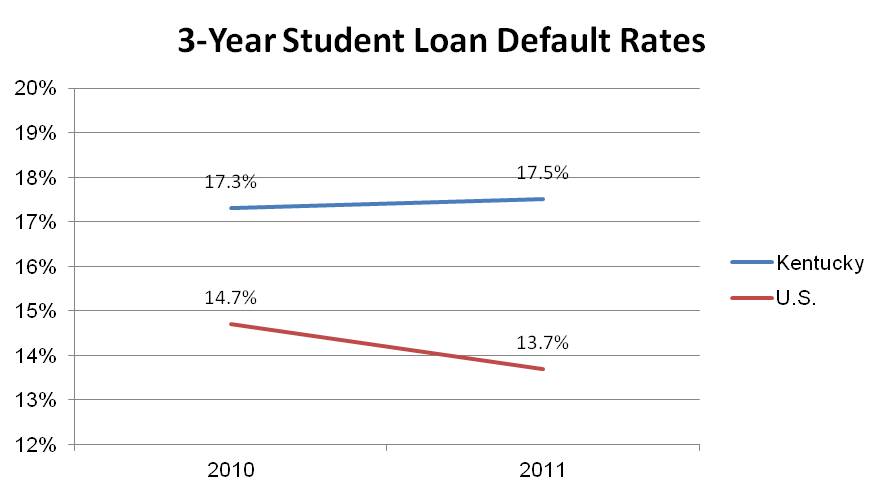 According to the new federal Department of Education data, the national three-year student loan default rate is 13.7 percent while in Kentucky it is 17.5 percent. The national student loan default rate declined this year, down from 14.7 percent last year. But Kentucky’s rate last year was 17.3 percent, tied for the state with the sixth highest rate that year. So the state did not improve and fell in the rankings.

As pointed out in the WFPL article, high student loan default rates are driven by numerous factors—including the effects of the recession meaning a lack of jobs for new college graduates and state budget cuts for higher education that result in tuition increases at Kentucky’s public colleges and universities.

Kentucky’s community colleges have particularly high student loan default rates—with a total default rate of 27.5 percent in 2011, up from 26.4 in 2010 (KCEP analysis of U.S. Department of Education student loan default rate data). In addition to the high costs of college (Kentucky Community and Technical College System schools have the 11th highest community college tuition and fees in the nation), these high default rates likely have much to do with the barriers that community college students face to degree completion. Kentucky’s three-year associate degree graduation rate is just 12.8 percent. The majority of community college students are low-income and most work while attending school (a large percentage working full-time) in order to meet the growing costs of college and often to support families; and Kentucky’s need-based financial aid is poorly equipped to mitigate these costs. The “need to work and make money” is a common reason for students leaving community college before earning a degree.

In addition to the need for greater state investment in higher education—including need-based financial aid—so that students are less likely to go in debt and more likely to earn a degree, it is important that proposals to address the student loan debt crisis at the federal level be taken seriously.