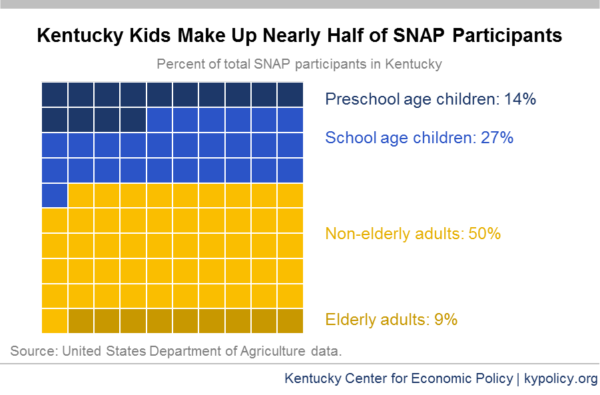 The Supplemental Nutrition Assistance Program (SNAP) helps Kentucky families put food on the table and improve children’s well-being across the commonwealth. But changes to SNAP in the Farm Bill and at the state level could weaken or jeopardize this assistance.

Food assistance leaves kids better off, in childhood and later in life

SNAP delivers more nutrition assistance to low-income children than any other safety net program. In 2016, SNAP helped about 19 million children each month nationwide. In Kentucky, SNAP helps about 266,000 children each month, or about 1 in 4 of our state’s kids. Children make up 41 percent of Kentucky SNAP participants. 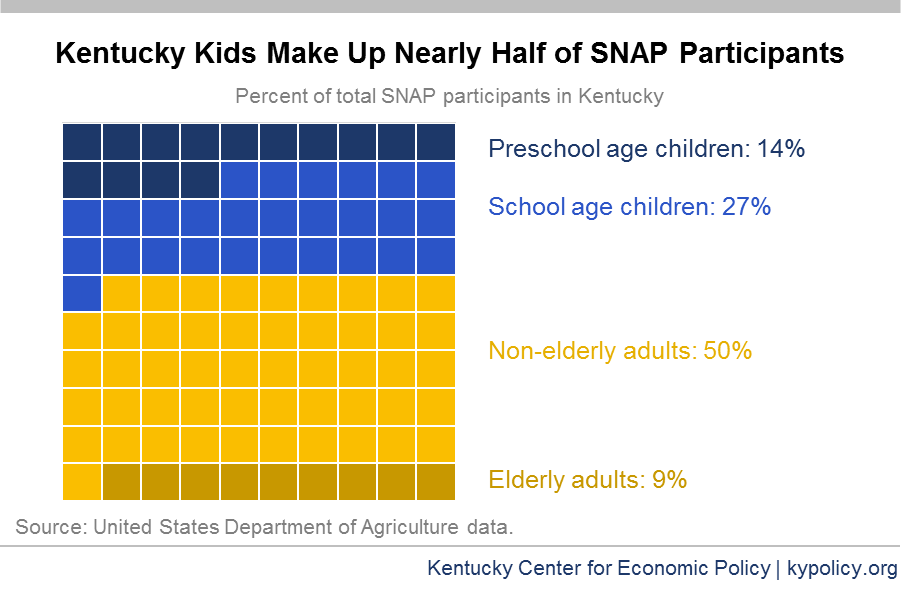 SNAP helps form a strong foundation of health and well-being for low-income children. Research increasingly shows that SNAP, formerly known as Food Stamps, can ward against the long-term effects on children of experiencing hunger and poverty. Studies have shown that:

The amount of money SNAP provides for purchasing food is modest, but well-targeted to the families that need it the most. The 154,300 households with children in Kentucky who participate in SNAP receive an average of $393 each month, more than all households on average ($254). It is estimated that through this targeted assistance, SNAP kept 3.8 million children out of poverty in 2014 across the country.

In fact, much of SNAP’s success can be attributed to its design. SNAP’s  eligibility rules and funding structure make benefits available to almost all families with little income and few resources, and its design automatically responds to changes in the economy. 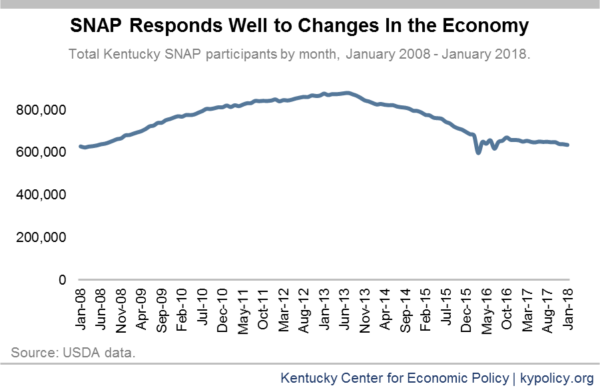 SNAP is helping to give thousands of Kentucky children the foundation they need to succeed. But after an initial boost to the program in the wake of the recession, the program has been cut back. The ongoing phase-out of work requirement exemptions will cause some low-income Kentuckians to lose coverage even as it fails to promote or provide work, and even as many Kentucky communities struggle with a deep shortage of jobs.

Now, the Farm Bill proposal could lead some parents of children over the age of six to lose food assistance. For instance, under the proposal, a single working mom whose employer penalizes her for missing work to care for a sick or disabled child by cutting her hours could be locked out of assistance for 12 months. One subsequent failure to comply with the new requirements – such as making a simple mistake in filing monthly work documentation – would cause her to be denied nutrition assistance for three years.

Under another scenario, the farm bill would get rid of Kentucky’s ability to soften the “benefits cliff” for a family whose income rises slightly above the eligibility threshold, but for whom childcare costs, rent and utility bills still make it hard to get by.

While some lawmakers claim children will not directly be disenrolled through these changes, research on health care enrollment shows that when parents become newly eligible and gain coverage, childhood coverage also increases even though they had always been eligible. It is a legitimate concern, then, that removing food assistance for adults could leave behind some children as well.

We should be building on SNAP’s effectiveness in improving the well-being of Kentucky’s children — and families nationwide — instead of proposals that would leave kids hungry and suffering the consequences of poverty and food insecurity long into the future.