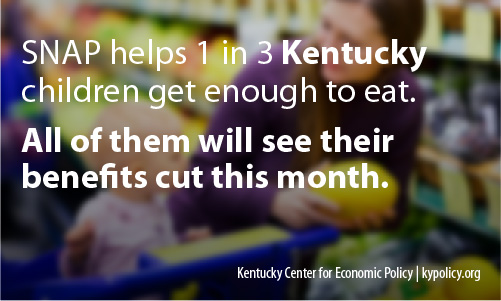 All of the more than 47 million Americans who receive SNAP will see their food assistance reduced. That’s because a modest boost in SNAP benefits—part of the 2009 American Recovery and Reinvestment Act (ARRA) designed to strengthen the economy and ease hardship—ends today. For a family of three, the cut will mean a reduction of $29 each month. Benefits will now average less than $1.40 per meal.

Recent work from the Center for Budget Policies and Priorities estimates a loss of $94 million in food stamps for Kentuckians between now and September of 2014 (the end of the federal fiscal year). Of the 875,000 Kentuckians affected, the cuts will fall on:

The end of the small ARRA increase in SNAP benefits will be hard on struggling Kentuckians. The boost has provided an important stepping stone during the deep economic recession and slow recovery, helping families keep food on the table as they look for employment, send their children to school, and try to get back on their feet.

In addition to helping to feed hungry families, SNAP is one of the fastest, most effective ways to stimulate a struggling economy. Every $1 increase in SNAP benefits generates about $1.70 in economic activity.

On top of the cuts going into effect today, the U.S. House of Representatives recently passed legislation cutting $40 billion from SNAP, potentially eliminating assistance for at least 88,000 Kentuckians and nearly 4 million nationwide. The legislation would provide strong financial incentives for states to reduce their caseloads, making it harder for families to put food on the table, and would eliminate assistance for some of the poorest Americans. The House plan for SNAP coupled with today’s cuts would deal a significant blow to millions of Americans.

Contrary to arguments being made for the additional House cuts–that SNAP is bloated with fraud and waste–SNAP’s payment accuracy is at an all-time high. Growth in enrollment and spending is temporary, and proves that SNAP is working as it should to help households in hard economic times. The majority of SNAP recipients who are able to work do so, and for those who can’t find a job, SNAP helps them keep afloat. Congress should not further reduce this already modest assistance to struggling families.