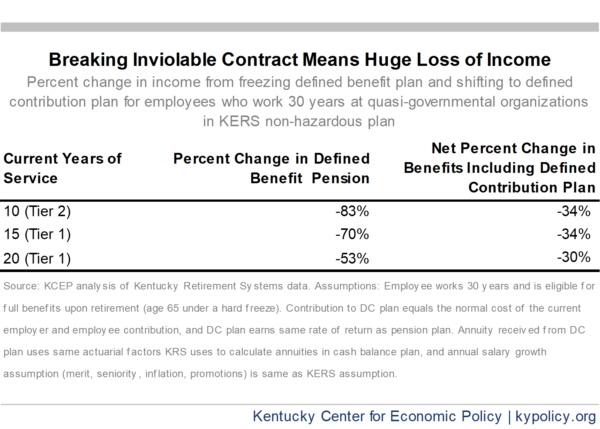 When the governor vetoed House Bill 358, the legislation affecting pension costs for quasi-governmental organizations like community mental health centers and regional universities, his primary stated objection was that it “violates the moral and legal obligation” to retirees of these agencies. He told a radio show that we should “take out the parts that are illegal and then repass the thing.”

The bill certainly was illegal, as we noted here. However, the governor also wrote in a letter at the end of the session that he would sign the Senate version of HB 358. When the Senate president issued a statement calling the governor’s veto “perplexing,” the governor responded that he was also “perplexed.” He pointed back to the Senate proposal and claimed it “did not include the blatant violation of the inviolable contract that was included in the final version.”

We all should be perplexed, because both versions of HB 358 are at odds with the inviolable contract. The violation in the Senate version was a major reason the House refused to go along with it.

The Senate plan put in place a “hard freeze” on the benefits of current employees. They could no longer accrue benefits in the pension plan, and would be moved to a 401k-style defined contribution (DC) plan for the remainder of their careers. A 20-year employee who plans to work 30 years, for example, could stand to lose an estimated 53 percent of his or her defined benefit pension, and the DC plan would not come close to making up for the loss, as shown in the table below.

A story in The Courier-Journal attributed HB 358’s sponsor as saying “many House members are concerned that the Senate approach would significantly reduce the pension benefits anticipated by many current employees of the affected groups.”

The Tier 1 and Tier 2 employees who would receive this cut are protected under the inviolable contract. State law says their benefits “shall not be subject to reduction or impairment by alteration, amendment, or repeal.” There are 6,700 such employees at quasi-governmental organizations, as indicated in the graph below. 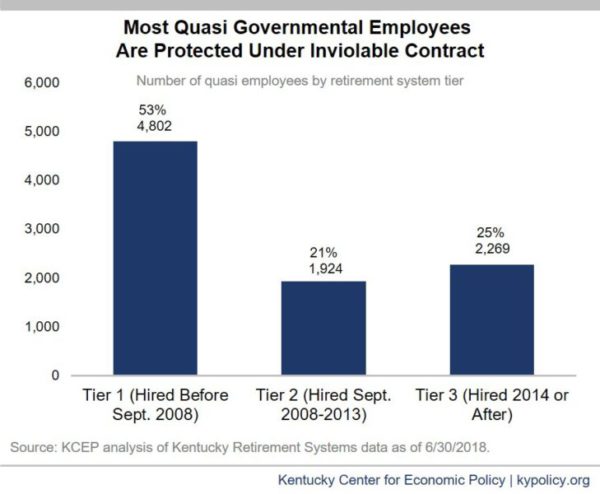 Kentucky needs ways to help quasi-governmental organizations that also safeguard the retirement systems, pass legal muster and protect the retirement security of employees. The legislature should continue to freeze the rate at which quasis are paying pension costs for now, then realign actuarial assumptions so they are reasonable and generate revenue for contributions by cleaning up tax breaks in the 2020 General Assembly. The options being considered by the legislature won’t get us where we need to go.